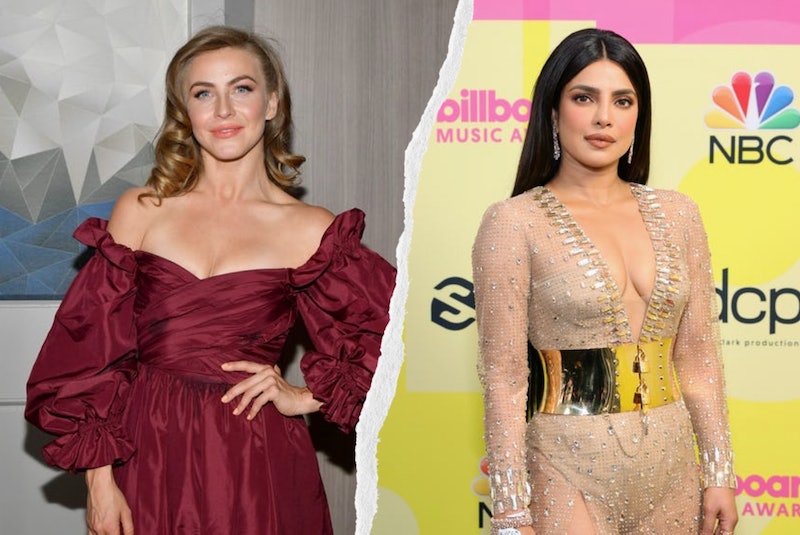 When you think of celebrity activists, who comes to mind? Perhaps Dolly Parton, whose $1 million donation to Vanderbilt University Medical Center last year helped fund Moderna’s COVID-19 vaccine. Or Beyoncé, whose BeyGood Foundation has provided school supplies to students in need and support to Black-owned small businesses amid the pandemic. Or Demi Lovato, who provided free therapy sessions to their fans during a 2018 tour. Or Miley Cyrus, whose Happy Hippie Foundation works to end youth homelessness, especially among LGBTQ+ individuals.

When CBS was searching for judges for its forthcoming competition series The Activist, however, the network settled on three names you may not have thought of: Priyanka Chopra, Julianne Hough, and Usher. Chaos ensued. Here’s everything to know about The Activist, the subsequent controversy, and the way its creators plan to change the show in light of the backlash.

What Was The Original Premise Of CBS’ The Activist?

Produced by CBS, Deviant Media, Live Nation, and Global Citizen, an organization that works to end extreme poverty and produces annual philanthropic concerts around the globe, The Activist was designed as a reality competition series in which six activists work to bring substantial change to either world health, education, or the environment. The activists would have been split into pairs and joined by three celebrities as they competed in challenges to promote their causes in hopes of achieving high online engagement, social metrics, and positive input from the show’s judges, per Deadline.

Each team would be working toward one major goal: to create powerful movements that promote their message, spark action, and earn them a spot at the G20 Summit in Rome, Italy. At the summit, the teams would meet global leaders with the goal of securing funding and awareness for the causes they’re promoting. Finally, whichever team earned the largest commitment at the summit would become the competition’s winner, whose cause would be celebrated at the finale featuring performances from high-profile artists.

“The Activist is a first-of-its-kind competition series that will inspire real change, as the series progresses from the United States to Rome for the Activists’ final challenge at the G20,” detailed Hugh Evans, CEO and co-founder of Global Citizen, per Deadline. “The audience will see the Activists’ passion and commitment for their causes tested as they petition world leaders to take urgent action to resolve the interconnected crises we face.”

“The Activist will spread awareness about society’s most urgent issues while also giving every viewer the opportunity to be part of the solution — an unprecedented example of how entertainment can change the world,” said Michael Rapino, Live Nation Entertainment’s CEO. “Combining competition and compassion, these essential causes will take center stage, as the show proves that there are no issues we can’t solve when we work together and demand change.”

Following the show’s announcement, The Activist received a wave of backlash from the public and critics alike, with many calling it “performative” and “tone-deaf.” Forbes writer Janice Gassam Asare called the show “extremely problematic” and likened it to “performance activism personified.” Asare wrote, “Many people lose their lives advocating for the most marginalized. These individuals should be amplified, venerated, and celebrated — not the folks who join a show to win a competition. If you’re going into activism for fame and popularity, then is it really activism?”

Social media conversations surrounding the show were similarly negative, with actor Jameela Jamil tweeting, “Couldn’t they just give the money it’s going to take to pay this UNBELIEVABLY expensive talent and make this show, directly to activist causes? Rather than turning activism into a game and then giving a fraction of the much needed money away in a ‘prize…?’ People are dying.”

Many social media users questioned CBS’ decisions to hire Chopra, Hough, and Usher as the show’s judges. “Julianne Hough is a judge on The Activist? The same Julianne Hough that did Blackface a few years back? Okay, cool cool cool,” wrote one Twitter user, referring to the time she dressed as Crazy Eyes from Orange Is the New Black for Halloween in 2013 and donned blackface. Others pointed out the time Chopra asked an activist if she “was done venting” after she criticized the actor’s decision to support Indian airstrikes in Pakistani territory in 2019 and the time Usher scolded a group of protesters at Atlanta City Hall in 2016.

On Sept. 10, Global Citizen released a statement to Deadline addressing the backlash toward the forthcoming series. “The Activist spotlights individuals who’ve made it their life’s work to change the world for the better, as well as the incredible and often challenging work they do on the ground in their communities,” said a spokesperson. “This is not a reality show to trivialize activism. On the contrary, our aim is to support activists everywhere, show the ingenuity and dedication they put into their work, and amplify their causes to an even wider audience.”

Hough took to Instagram to respond to the controversy on Sept. 14, writing, “The last few days have been a powerful demonstration of real-time activism. Thank you for using your voices, calling me in, your accountability, and your candor. I am deeply listening with an open heart and mind.” She touched on the feedback that The Activist is “performative,” “tone-deaf,” and that its celebrity judges “weren’t qualified to assess activism.”

“I heard you say there was hypocrisy in the show because at the root of activism is a fight against capitalism and the trauma that it causes so many people and that the show itself felt like a shiny capitalistic endeavor,” continued the former Dancing With the Stars pro. “I also heard you say that trying to value one cause over another felt like the Oppression Olympics and totally missed and disrespected the many activists who have been killed, assaulted and faced various abuses fighting for their causes.”

Hough added, “And because of this, there is a feeling of insult, dehumanization, insensitivity and hurt that is being rightfully felt. I do not claim to be an activist and wholeheartedly agree that the judging aspect of the show missed the mark and furthermore, that I am not qualified to act as a judge.”

She then addressed the resurgence of her blackface controversy and delivered an apology. “Wearing blackface was a poor choice based on my own white privilege and my own white body bias that hurt people and is something I regret doing to this day,” she wrote. “However, the regret that I live with pales in comparison to the lived experiences of so many. My commitment has been to reflect and act differently. Not perfectly, but hopefully with a more developed understanding that racism and white supremacy is harmful to ALL people.”

Hough also acknowledged that the “messy and uncomfortable conversation” surrounding the show isn’t over and noted that she’s “committed to being here for all of it.” “It feels important for me to share that the original reason I signed on to this show was because I was really excited to be a part of something that highlights, and is centered around sharing activists' work on a larger platform,” she continued. “In doing so, I felt it would help educate, mobilize, and inspire people around the world to get involved in activism because many worthy causes need attention, funding, and most importantly the power to effect real change.”

Finally, Hough said she brought the concerns and criticisms to “the powers that be” and believes they’re listening:

“I have faith and confidence in the beautiful people that I've worked with will make the right choice and do the right thing moving forward. Not just for the show, but for the greater good. I'm going to continue to listen, unlearn, learn and take the time to be fully present with everything that you have all shared because I don't want to just react. I want to digest, understand and respond in a way that is authentic and aligned with the woman I am becoming.”

She concluded, “I also understand that there is no response that I could share that would make everyone happy, however, I want you to know that this is a conversation and I am still listening.”

On Sept. 15, Global Citizen issued a statement on Twitter and Instagram addressing the criticism and a new format for the show altogether. “We apologize to the activists, hosts, and the larger activist community — we got it wrong,” the statement read.

One of the biggest changes is that the new format will not feature a competition element. Rather, it will be a “primetime documentary special ... [that] will showcase the tireless work of six activists and the impact they have advocating for causes they deeply believe in.” The activists will also receive cash grants for their chosen organizations, “as was planned for the original show.”

Though The Activist was scheduled to premiere Oct. 22, that doesn’t seem to be the case anymore — Global Citizen said the documentary special’s airdate was still TBA. If you don’t have access to CBS, the original series was going to stream live and on-demand on Paramount+, so the new version likely will, too. A trailer for The Activist has not been released, and given the concept switch, it might be some time before we get a glimpse at the show’s new iteration.

This post will be updated as more information on The Activist becomes available.

More like this
Andy Cohen Apologized To Larsa Pippen After A 'RHOM' Season 5 Reunion Dust-Up
By Brad Witter
Turns Out George Clooney Is A Huge Fan Of This Classic British Game Show
By El Hunt
Everything To Know About The 'Daisy Jones & The Six' TV Series
By Maxine Harrison and Brad Witter
What Is Mary J. Blige’s Net Worth? The 9-Time Grammy Winner Is Doing “Just Fine”
By Hugh McIntyre
Get Even More From Bustle — Sign Up For The Newsletter
From hair trends to relationship advice, our daily newsletter has everything you need to sound like a person who’s on TikTok, even if you aren’t.

This article was originally published on Sep. 15, 2021