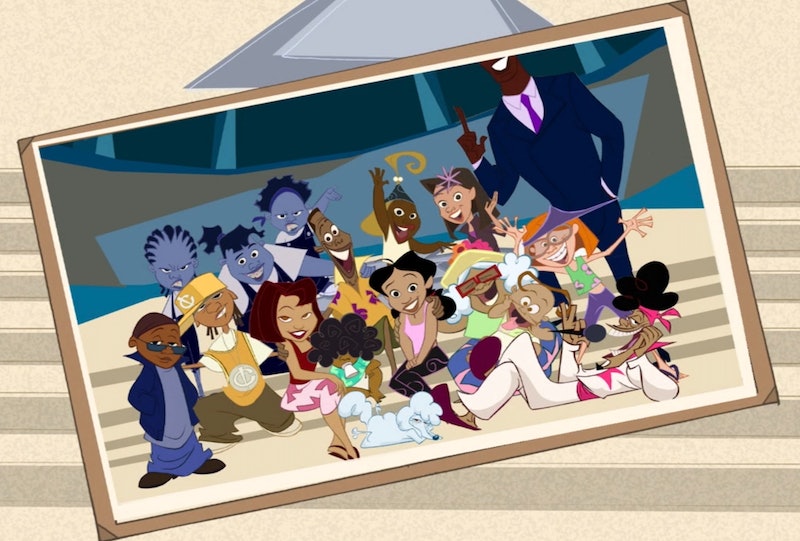 The Proud Family was a Disney Channel series like no other. Following 14-year-old Penny Proud (Kyla Pratt) and the rest of the titular family’s hilarious hijinks, the show marked the network’s first original animated series upon its 2001 premiere and was a rare family-oriented cartoon centered on Black characters. Complete with a theme song by Destiny’s Child and Solange, modern pop culture references, and the vocal talents of well-known TV actors Pratt (One on One), Jo Marie Payton (Family Matters), and Tommy Davidson (In Living Color), among others, The Proud Family ran for 52 episodes and concluded with a hit full-length film, The Proud Family Movie.

The 2005 Disney Channel Original Movie finds Penny getting ready to celebrate her 16th birthday when she gets the chance to audition for a backup dancing spot for rapper 15 Cent at the Extreme Stuffball Championship Halftime Extravaganza. But when Penny’s overprotective father, Proud Snacks entrepreneur Oscar, catches his daughter kissing the rapper, he forbids her from performing and cancels her birthday.

Oscar’s simultaneously working to present a new serum meant to improve the taste of Proud Snacks’ pork-flavored peanuts to investors, which backfires, as it makes the snacks grow large and explode. When evil mastermind Dr. Carver sees the serum’s effect, he realizes it’s the perfect product to complete the army of scientifically-modified humanoid peanuts he created to destroy humanity. Dr. Carver then tricks the Proud family into going on a trip to his home on Legume Island — with secret plans to create humanoid peanut clones of the family and use them to steal Oscar’s formula.

With a reboot of the series titled The Proud Family: Louder and Prouder set to premiere Feb. 23 on Disney+, I rewatched The Proud Family Movie to unpack all the plot details that went over my head when I first saw it on Disney Channel as a kid.

This may seem obvious in hindsight, but as someone who wasn’t paying attention to the hip-hop scene at 6 years old, I admittedly didn’t know who 50 Cent was during my first viewing. Watching the film back, I immediately realized 15 Cent’s character is a clear parody of the “In Da Club” rapper. However, their similarities basically end at their shared namesake and career path. Rocking brown braids, a grill, and a snapback hat with a “¢” printed on it, 15 Cent looks a lot more like the rapper Bow Wow (born Shad Moss), who went by Lil’ Bow Wow at the time.

While 15 Cent is seemingly modeled after the two rappers, neither of them voiced the character. Instead, Disney Channel enlisted R&B singer Omarion to play the fictional teenage performer. Known as the lead singer of B2K at the time, Omarion launched his solo career that year with the Grammy-nominated album O. As an actor, he also appeared alongside Pratt on UPN’s One on One prior to lending his voice to The Proud Family Movie. These days, you’ve probably heard his name jokingly used as a synonym for COVID-19’s Omicron variant, a viral trend he’s publicly poked fun at.

A Not-Yet-Famous Musician Sang For The Film

The Proud Family always featured musicians on the cutting edge of fame, enlisting Solange to perform the theme song a year before the release of her debut album, 2002’s Solo Star. But the DCOM includes a song titled “Right Here,” performed by a musician whose breakthrough project wouldn’t drop for another decade: Jhené Aiko. Played at the beginning and end of The Proud Family Movie, Aiko’s voice is unmistakable now that we’ve heard it on songs including “The Worst” and “BS,” but you likely wouldn’t have recognized it at the time. Coincidentally, the singer’s biggest chart hit is 2014’s “Post to Be,” a collaboration with the controversial Chris Brown and the voice behind 15 Cent, Omarion.

The Adult Humor Is Not Subtle

Many children’s series and films feature jokes meant to fly over their heads and entertain parents — Shrek, I’m talking about you. But it’s shocking to see some of the adult content that made its way past Disney’s executives and into The Proud Family Movie. When Penny presents her outfit for the 15 Cent audition to her parents, Oscar says to his wife, “Trudy, why is your daughter dressed like a ho-” Quickly cutting him off, Trudy corrects his language: “A wholesome teenager? Oscar, I think Penny looks very fashionable. It’s what the kids wear nowadays.”

After evil Dr. Carver persuades Oscar to go into business with him, attempting to trick him into handing over the formula, the entrepreneur excitedly tells Trudy they’re going to be rich. “What kind of jungle punch did you drink at the luau?” she asks, assuming he must be drunk.

Penny then returns to their resort suite with a friendly humanoid peanut named Cashew. “What?! You know what I told you about hanging out with boys,” Oscar says before picking up Cashew and looking under his grass skirt for his genitals. “You are a boy, ain’t you?”

Once the family realizes they’ve been tricked by the evil Dr. Carver, who was accidentally created when the real Dr. Carver cloned himself, Penny and Oscar use the scientist’s gun to turn his vicious humanoid peanut army into peanut butter. In the process, they cover the entire Stuffball Championships stadium in peanut butter, which 15 Cent pretends is a stunt to promote his new single, titled “15 Cent: Raw, Uncut, and Nutty.” How that line was approved for a kids’ film is beyond me, but as an adult, it had me cracking up.

I always noticed Proud family grandmother Suga Mama’s flirtatious relationship with Papi Boulevardez, but it wasn’t until rewatching The Proud Family Movie that I realized exactly how forwardly sexual her storylines are. Before embarking on the ill-fated vacation, Suga Mama is asleep on the couch when Penny sneaks out to 15 Cent’s dance audition. “C’mon Denzel, give Suga Mama some sugar,” she says, hugging her dog tight to her chest while clearly having a sex dream about Denzel Washington.

After meeting Dr. Carver for the first time, Suga Mama declares, “I’m gonna get to know him, and we’ll get a rare shot at the hairdo,” which can only mean she’s looking to spend a steamy night with him. Trudy mentions her boyfriend, Papi, back home, but Suga Mama says, “Papi don’t own an island, girl,” proving herself to be a grade-A player.

Later, Suga Mama spots Dr. Carver outside while she’s about to take a dip in the hot tub and begins persuading him to join her. Donning a robe, she suggestively dances and undresses into her bathing suit before getting into the tub. Dr. Carver tries to get away by letting her know he’s not wearing any swim trunks, but it’s no match for Suga Mama’s sexual determination. “Well, what a coincidence! Neither am I,” she says with a smirk, ripping off her bathing suit and throwing it away. He eventually joins her, because who can resist Suga Mama’s charm?

While Penny works to get to the Stuffball Championships before evil Dr. Carver can unleash his fighting peanuts on the stadium, Oscar’s older brother Bobby (voiced by Arsenio Hall) performs “The Star-Spangled Banner” for the crowd ahead of the game. The character is a clear parody of funk musician George Clinton, and his national anthem rendition is a jazzy, drawn-out take on the song that lasts three hours, prompting loud snores and “Boo”s from the crowd.

Oscar’s mainly known for his uptight parenting style and often bad-tasting Proud Snacks inventions, but the man knows the facts about his work. After meeting the real Dr. Carver, Oscar learns he’s the great-great-grandson of real-life agriculturalist George Washington Carver, aka the most famous Black scientist of the early 20th century. Excited by the topic, Oscar explains that Carver’s work included developing more than 100 uses for peanuts, including shampoo, instant coffee, and peanut butter.

While his retelling of Carver’s career is mainly accurate, according to the National Peanut Board, the Incas and Aztecs are credited with making peanut butter long before he published a farming bulletin titled “How to Grow the Peanut and 105 Ways of Preparing it For Human Consumption” in 1916.