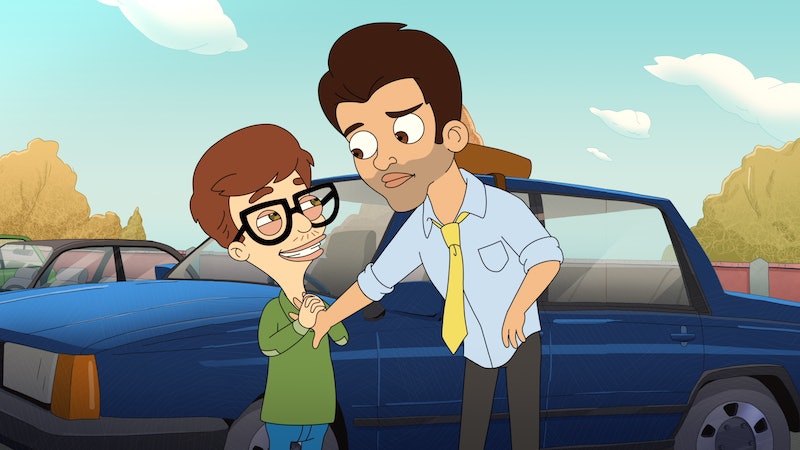 Big Mouth has long explored the messy yet relatable realities of adolescence — and what’s more relatable than a misguided crush on your hot, young teacher? Such is the premise of Season 5’s “The Green-Eyed Monster” in which Andrew finds himself infatuated with Mr. Keating, a Shakespeare-loving sub and aspiring actor voiced by Adam Scott. “Is this guy f*cking Bounty? Because I am absorbed,” says Andrew, as Mr. Keating taps into the students’ middle-school angst via The Bard.

Andrew being Andrew, he takes things way too far. He pops up at the bar where Mr. Keating moonlights — a regular gig aptly named “Shakespeare in the Bar” — before inviting himself to Mr. Keating’s home and cozying up to his fiancée, Sarah. (If you’re a Glee fan, it’s very much Rachel and Mr. Schue circa Season 1.) It’s impossible to get behind Andrew’s obsessive stalking and threats, but it is easy to see why he developed a crush on Mr. Keating in the first place. The guy’s smart, sensitive, and cool — one of the most important things a teacher can be.

In Season 5 of the popular Netflix series, Scott, the actor who voices Mr. Keating (also known as Dylan), joins a star-studded lineup of guests. Keke Palmer plays Rochelle, Chloe Fineman plays Leah, and Kumail Nanjiani plays himself — well, a version of the “comedy star turned jacked man-beast” who cites No Nut November as the secret to his mainstream success.

Unlike Nanjiani, of course, Scott is not playing himself. But even in animated form, Mr. Keating is reminiscent of the beloved Parks and Recreation actor — from his subtle scruff to his Ben Wyatt-like button-up.

References to Scott’s sitcom roots go beyond looks alone. As Redditor TheOriginalJez pointed out, a couple of cone-shaped figurines and a farmer can be seen on Mr. Keating’s bookshelf on Big Mouth — an apparent nod to the confusing Cones of Dunshire board game, which Scott’s Parks and Recreation character created. Also on the shelf? A few tomes of note, including Cones and Castles and Accounting, another major reference to Ben’s profession on Parks. Redditor notoriousbgs also noticed a Letters to Cleo poster in the background of the bar; on Parks, Ben is a fan of the band, and they even show up to play at the Pawnee-Eagleton Unity Concert during Season 6.

Thanks to his theatrical ambitions, Mr. Keating also rings reminiscent of Scott on Party Down, where Scott also plays an out-of-work actor. (While Mr. Keating turned to teaching to pay the bills, Party Down’s Henry opted for a life of catering to hilarious results.)

Of course, this is Big Mouth we’re talking about, and Easter eggs are part of the language of the Emmy award-winning show — so there could be even more Scott nods worth watching out for upon a second viewing.