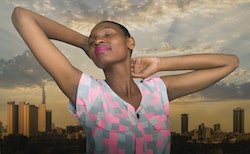 If you haven’t already been soaking in the springtime glow, you’ll feel plenty of magic ahead of the April 2022 full moon, which illuminates the skies on April 16. La luna is sashaying into the socialite air sign Libra, sprinkling a bit of romance and optimism into our lives. This lunation is also called the Pink moon, referring to the time of year in which the pink moss phlox blossoms, according to the Farmer’s Almanac. But the blooming of the rosy perennials isn’t the only reason for a burst of hopefulness. It’s accompanied by a special conjunction by Neptune and Jupiter, spelling harmony and balance for a select few zodiac signs least affected by the April 2022 full Pink moon.

In astrology, full moons designate more than just the brightest and fullest point in the lunar cycle — it’s also a time for reaping rewards. On the other hand, the luminary also heralds intense emotions and a bit of lunar drama. Since the moon ingresses into relationship-oriented Libra, expect to shift your focus on the power dynamics in your relationships. While Libra zodiac signs are fair and diplomatic, their neutrality can come off as non-confrontational, which is why the air sign has earned a reputation for being a bit passive — so this lunation is about how you show up in your relationships.

“As the first full moon of this astrological year, there is an opportunity here to clean up, release and let go of an internal or external struggle in order to set the groundwork for more stability and authenticity moving forward,” Noush, astrologer for Girl And Her Moon, tells Bustle.

But the enchantment doesn’t end there. Dreamy Neptune and lucky Jupiter — both stationed in mystical water sign, Pisces — form a once-in-a-lifetime conjunction on Apr. 12, charming the collective to speak their biggest goals into existence. This celestial hookup will inspire some to channel their inner Sabrina Spellman to materialize their dream life. If you’re one of the lucky few who will breeze by during the full moon, you may want to get clear on what that lifestyle looks like.

This lunar event may point out some of the relationship struggles, which can be intense for some. But for the others, it’s all about making magic. Read on to find out if you’re one of the zodiac signs least affected by the April 2022 full Pink moon.

More like this
February's Full Snow Moon Will Breeze Right By These 3 Zodiac Signs
By Brittany Beringer
These 3 Signs Are The Master Chefs Of The Zodiac
By Kristine Fellizar
These 4 Zodiac Signs Make The Best Bridesmaids
By Nina Kahn
These 4 Zodiac Signs Will Get An Ego Boost During The February Full Snow Moon
By Brittany Beringer
Get Even More From Bustle — Sign Up For The Newsletter
From hair trends to relationship advice, our daily newsletter has everything you need to sound like a person who’s on TikTok, even if you aren’t.