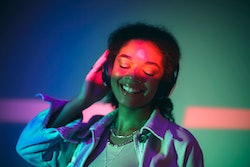 One of the defining markers in the astrology of 2022 is the presence of Jupiter in Pisces — an exciting transit that only happens every 12 years and can bring spiritual growth, creative expansion, and a greater sense of interconnectedness. On April 12, during mighty Jupiter’s year-long journey through the sign of the fish, it’ll make an extremely rare and special connection with dreamy planet Neptune, also known as the Jupiter-Neptune conjunction in Pisces. This spiritual cosmic union has the potential to bring blessings to all zodiac signs, so you’ll want to know what to expect from its once-in-a-lifetime magic.

In astrology, jovial Jupiter is the planet of luck, philosophy, and expansion. Its growth-oriented energy helps us to expand our minds, manifest abundance, and often brings good fortune, too. Neptune, on the other hand, is the planet of dreams and illusions. Its mystical energy is associated with intuition, spirituality, and symbolism — and its hazy vibe can sometimes make it hard to see things clearly. When these two planets form a conjunction aspect, it makes it easier for us to fully embrace our spiritual self and enhance our creative instincts. It’s great for deepening any mystical practice, expressing emotions through art, and tapping into our intuition.

Jupiter and Neptune come together in the zodiac approximately every 13 years, making this a relatively uncommon alignment. However, it’s much more rare that these celestial bodies meet in the dreamy sign of Pisces — this hasn’t happened since 1856 and won’t again until 2188 — making the 2022 Jupiter-Neptune conjunction a once-in-a-lifetime event that you don’t want to sleep on.

What Happens During The Jupiter & Neptune Conjunction In Pisces 2022

Any time two planets come together in a conjunction aspect in astrology, it’s the beginning of a new cycle. In the case of Jupiter and Neptune, the last cycle began back in 2009, when the two met in the futuristic sign of Aquarius. This time around, the two planets are meeting in Pisces, which only happens approximately every 150 years. This particular zodiacal placement is especially notable because of both Jupiter and Neptune’s associations with Pisces: Jupiter is considered the traditional ruling planet of Pisces, while Neptune is considered its planetary ruler in modern astrology. To have both of Pisces’ cosmic crowns traveling through its watery realm at once is profound, as it allows both planets to operate more effectively, embrace their true nature, and feel “at home.”

Jupiter traverses through Pisces about every 12 years, and spends about a year in the sign in total. In 2022, it’ll be in the sign of the fish through May 10 and again from Oct. 28 to Dec. 20. This auspicious period could bring rapid spiritual growth, dreamy artistic inspiration, and a deep sense of idealism. It’s also great time to pursue the exploration of mystical arts, creativity, or emotional healing. Meanwhile, Neptune only visits Pisces every 165 years or so — but when it does, it stays for more than a decade. In our lifetime, Neptune first dipped into Pisces in 2011, and it’ll sail through its seas until 2026. The Jupiter-Neptune conjunction on April 12 marks the only time during this Piscean transit that Jupiter and Neptune will perfectly align.

What To Expect From The Jupiter-Neptune Conjunction

While Jupiter and Neptune have been traveling together in Pisces for months (and will continue to do so on-and-off through the rest of this year), they’ll be at the same degree of the zodiac on April 12, which marks the peak of their conjunction. Because both planets are further from the sun and orbit more slowly, the energy of this conjunction will still be felt strongly for a week before and after the exact alignment.

With Jupiter and Neptune coming together in their collective home sign, the Pisces zodiac energy is being greatly amplified. Spiritual, creative, and intuitive, Pisces is all about embracing our emotions and losing ourself in intangible things. Pisces is also the final sign of the zodiac, so its energy is mutable, ethereal, and transcendental — it teaches us to heal and transform. All zodiac signs will be able to tap into this energetic flow more easily during the Jupiter-Neptune conjunction. It can also be helpful to look at where Pisces is located in your birth chart for an even clearer idea of how this might manifest for you.

Regardless of your zodiac sign, the Jupiter-Neptune alignment has the potential to strengthen our sense of spirituality, heighten our intuition, and encourage us to explore our subconscious minds more deeply. Because expansive Jupiter brings abundance and illusive Neptune brings mysticism, we might find that it’s easier to tap into a meditative state or glean insight from the symbolism in our dreams. Strengthened by the power of emotional Pisces, integrating new concepts on a subconscious level or new philosophies into our hearts becomes easier to access now. Together, Jupiter and Neptune are about feeling things in your soul. This makes it a powerful time for prayer, meditation, or a Pisces-themed ritual.

This alignment may also spark a creative renaissance, both on a personal and societal level. An influx of inspiration or artistic visions could help you bring a symbolic project to fruition, so try to express your feelings through whatever creative medium you’re drawn to. We may also find that we’re connecting with art, music, or film in a more meaningful way. Consider the last Jupiter-Neptune conjunction in 2009: The explosion of pop hits that dominated the charts in 2009 are still beloved bangers today, and the trends that emerged are thought to have influenced the pop music scene for years to come.

This isn’t to say that the Jupiter-Neptune conjunction is all rainbows and sunshine. Neptune has the potential to bring deception, while Jupiter has a tendency to expand everything it touches — meaning that escapism, delusions, or a lack of boundaries could be an issue. It’ll be important not to let yourself get swept up in any too-good-to-be-true illusions during this transit, as confusion is likely and things may not be as they seem. It’s also important to try to stay present and grounded, as the desire to flee from reality or put on rose-colored glasses may be hard to resist.

More like this
Your Ultimate Guide To Jupiter’s Annual Retrograde
By Brittany Beringer
August’s Astrology Includes Uranus Retrograde & A Rare Taurus Conjunction
By Nina Kahn
How Jupiter Retrograde 2022 Will Affect Your Zodiac Sign
By Brittany Beringer
The Death Tarot Card Meaning, Explained
By Kristine Fellizar
Get Even More From Bustle — Sign Up For The Newsletter