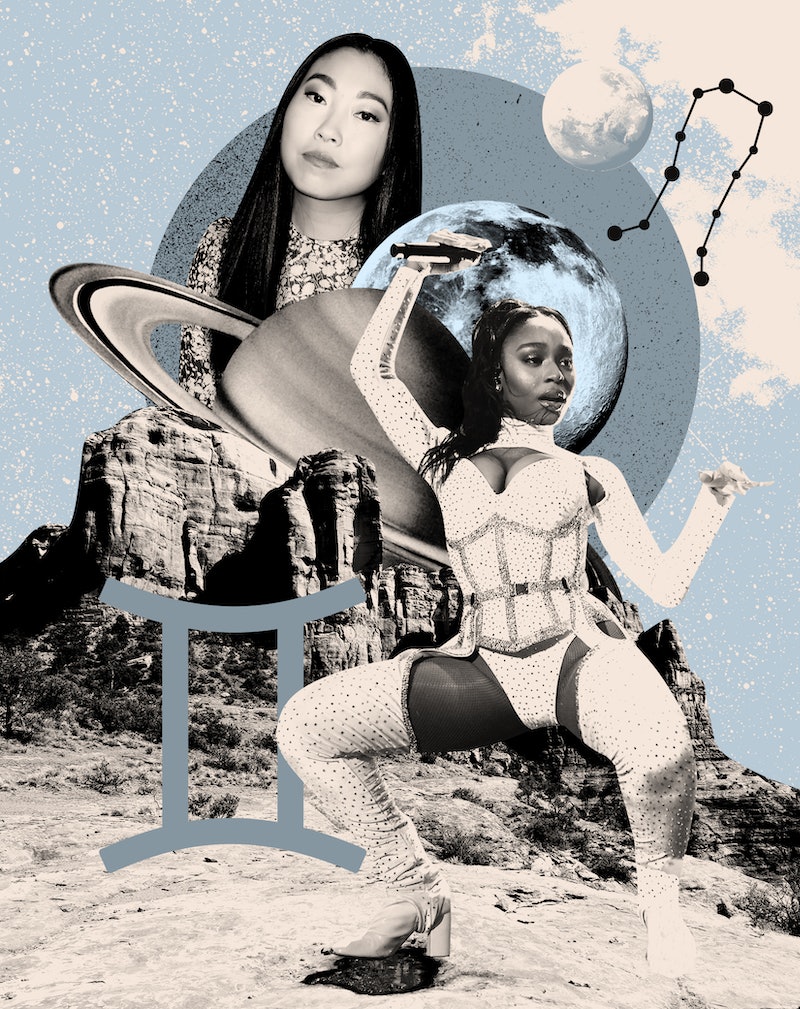 Sharing a zodiac sign with another person doesn’t automatically mean you’ll feel like you were separated at birth. In fact, some of the zodiac’s twins feel strongly that May Geminis and June Geminis may as well be from two different families. Everyone has a unique cosmic makeup, so this makes sense — as the placement of the planets in our charts will vary based on the day, year, and even minute of our birth, even if we’re born under the same sign. But do the alleged differences between May Geminis and June Geminis have any basis in astrological fact? Technically yes, but it’s more complicated than that.

Our sun signs are only the tip of the cosmic iceberg when it comes to the personality-building pieces of our birth charts, so it’s silly to think that all Geminis would have similar natures. Because while almost all people born between May 21 and June 20 are indeed Gemini suns and most likely share some Gemini traits, their moon, Mercury, Venus, Mars, and rising signs could vary wildly, depending on their exact birth date and time. They’ll probably still have some core Gemini qualities in common, but there can be major variations in the way they present themselves, show emotions, pursue relationships, or move forward on their goals.

That said, there’s another important factor that can set May Geminis and June Geminis apart — and that’s a concept known as decans. Decans refer to three subdivisions that exist within each zodiac sign, each of which can change the way a sign’s energy is outwardly manifested. Decans are based on degrees, so you can find your sign’s decan by looking up the degree of your sun sign in your birth chart. Because each sign spans 30 degrees on the zodiac wheel, the first 10 degrees of a sign is assigned to the first decan, the second 10 degrees comprise second decan, and the last 10 degrees make up the third decan. The sun travels approximately one degree per day, so this means that almost all May Geminis are first decan Geminis, while most June Geminis are either second or third decan Geminis.

Looking through the lens of decans, let’s explore the differences between May Geminis and June Geminis and get a more nuanced look at the zodiac’s mutable air signs.

1. May Geminis Have The Most Stereotypical Gemini Quirks

Gemini is one of the signs ruled by Mercury, which is the planet of thinking and communication. Geminis born in May (aka first decan Geminis) are solely ruled by this planet’s influence, but those born in June are second or third decan Geminis — which means they have a secondary planet that affects how they express their Gemini qualities. Because May Geminis are entirely ruled by Mercury, they often embody lots of stereotypical Gemini zodiac traits and can relate to the sign’s most well-known strengths and weaknesses — such as being talkative, witty, mischievous, and curious about the people and things around them.

All Geminis tend to be social people, given that they’re one of the communicative air signs of the zodiac. But because June Geminis are born in the sign’s second or third decan (which are co-ruled by relationship planet Venus or collective-minded planet Uranus, respectively), their friendships and partnerships tend to be an even bigger part of their lives than their May-born counterparts. Venus’ influence naturally enhances June Geminis’ need for interpersonal connection, while the quirky Uranian vibes make social groups, community, and collaboration a big theme for them, too (as Uranus is the ruler of Aquarius, the sign of friendships). Expect these twins to be attending more social events and being extra involved with their crew.

3. May Geminis Are More Flexible

As one of the mutable zodiac signs, Geminis are known for being especially changeable and go-with-the-flow. But because first decan Geminis (all born in May) are solely ruled by quick-thinking Mercury, they’re even more flexible than you’re average Gem. These Geminis can easily adapt to changing circumstances and are always willing to change their mind on something when presented with new information. They may be a little unpredictable and hard to pin down, but that kind of capricious energy is part of what makes this sign so exciting to be around.

Geminis rarely have trouble coming up with new ideas, as these clever intellectuals are always thinking, learning, and changing. But because second and third decan Geminis (all born in June) have either artistic Venus or innovative Uranus as their planetary co-rulers, they’re often even more creatively driven. These Geminis tend to have either a strong eye (and appreciation) for beauty, art, and visual aesthetics, or a knack for being hit with genius-like inspiration and coming up with radical new ideas — so tap these visionary chatterboxes if you’re looking for someone to help you brainstorm or talk through your creative process.

5. May Geminis Are The Best At Multi-Tasking

The sign of Gemini is represented by the symbol of the twins — which reflects their ability to think, work, and talk twice as fast as just about any other sign. But no one’s quite as capable of effortlessly multi-tasking as a May Gemini. As first decan Geminis, who are arguably blessed with the most generous serving of Mercury’s intellectual prowess, these detail-oriented people can process information quickly and do many things at once (while making it look easy). They feel better when they’re able to have multiple projects going simultaneously, as it keeps their highly-active minds stimulated and engaged.

Geminis are total sponges when it comes to absorbing facts and new information, so they tend to be pretty well-informed and up-to-date when it comes to keeping up with current events. But because second and third decan Geminis (all of whom are born in June) have either fairness-minded Venus or community-oriented Uranus as additional cosmic influences, they tend to be even more passionate about working toward equality and fighting against social injustices. Power imbalances irk these Geminis more than most, so they’ll always speak up for what they feel is just and try to right wrongs against people.