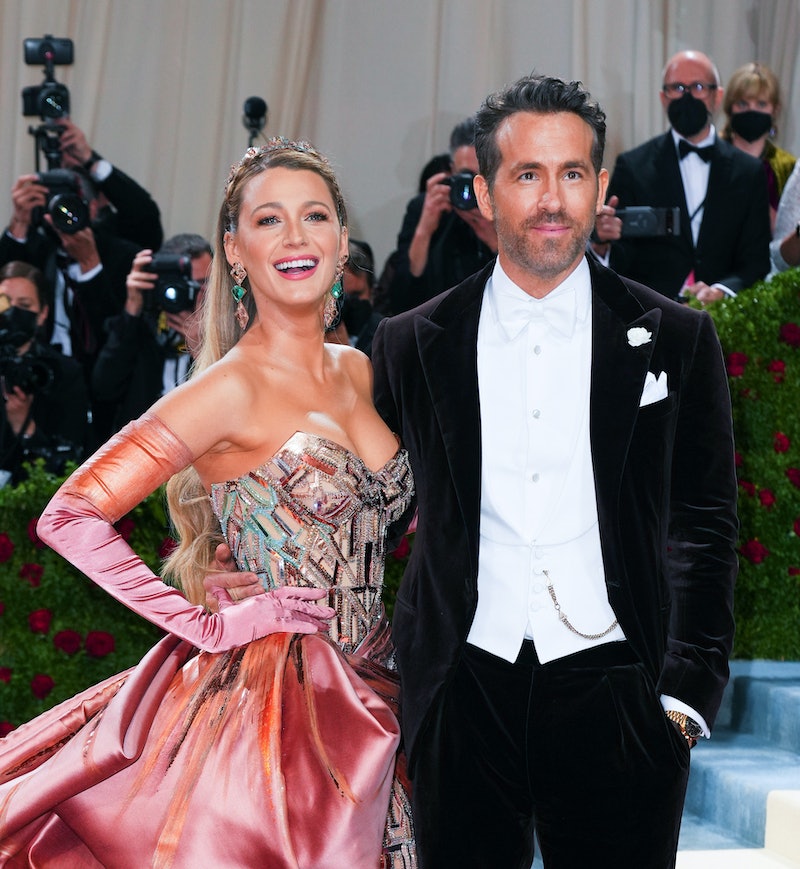 Hollywood relationships come and go, but one A-list couple that’s stood the test of time — and simultaneously won our hearts — is Blake Lively and Ryan Reynolds. After being cast alongside each other in The Green Lantern back in 2010, the pair tied the knot in 2012, and they’ve been seemingly smitten ever since. Known for their love of publicly trolling one another as well as their love of publicly gushing over one another, it’s hard not to root for these stars and the sweet relationship they share.

Given that Lively and Reynolds are currently expecting their fourth child together and appear to be as happy as ever, I decided to take a look at some of the cosmic magic that’s taking place behind the scenes of their astrological charts. Using their birth dates, times, and locations, I explored their relationship astrology using a process called synastry, which takes into consideration the way the planets interact with one another in their natal charts.

Read on for the full scoop on Lively and Reynolds’ astrological compatibility.

Lively (born Aug. 25, 1987) is an astute and down-to-earth Virgo, and Reynolds (born Oct. 23, 1976) is a deep and intense Scorpio. This cosmic combination tends to mesh well, as earth and water are considered receptive zodiac elements, and both signs are introspective and attentive. Their Virgo-Scorpio compatibility goes even further — as Lively and Reynolds each have an entire stellium of planets in their respective zodiac signs. Lively has the sun, moon, Mercury, Venus, and Mars clustered together in Virgo, while Reynolds has the sun, moon, Mars, Uranus, and the North Node in Scorpio. These planetary clusters amplify the couple’s easygoing connection and denote strong compatibility in their charts overall.

Their sun signs form a delightfully sweet sextile to one another, so they’ve likely had an easy time being themselves around each other from the start. Sextile aspects are super helpful for communication, and this connection indicates a strong foundation of friendship beneath the romance. Lively confirmed this in an interview with Marie Claire, saying "I knew [Reynolds] would always be my best friend for my whole life ... I'd never known anything like the friendship that I had with him.” With their sun signs linked so harmoniously, it makes sense that these two are bonded by a powerful friendship above all.

Additionally, Lively and Reynolds were both born under a new moon phase. New moon babies are generally intuitive and in touch with their feelings, and can trust in their ability to make decisions for themselves. Paired with their compatible moon signs — also in Virgo and Scorpio, respectively — this couple probably has no trouble connecting emotionally and communicating about their individual wants and feelings.

There’s still more of a magical synastry between the luminaries in this couple’s collective charts. Lively’s moon is blowing a sweet kiss to Reynolds’ Venus (planet of love), which brings ease and connection when it comes to emotions and romance. Meanwhile, Reynolds’ sun is being supported by Lively’s Mars (planet of sexuality), which means that steamy passion and mutual motivation is basically built into their bond. Overall, these alignments are equal parts energizing and comforting, bestowing Lively and Reynolds’ relationship with the best of both worlds.

To round out the astrological big three one must look at Lively and Reynolds’ rising sign connections. The rising sign — also known as the ascendant — is the point that dictates how people present to and interact with the world. Reynolds’ rising sign is Virgo, which aligns beautifully with Lively’s Virgo stellium and makes understanding and relating to her come naturally.

Lively’s ascendant is in proud and bright Leo, which gives her an air of confidence and charisma — but Reynolds has responsibility planet Saturn sitting directly on top of this point. Saturn’s energy can be a little restrictive and stern, but it also symbolizes patience and long-term commitment in synastry. While it can point to challenges, this connection also illustrates that this couple has longevity on its side and can be great teachers to one another. Reynolds has echoed this in an interview with Entertainment Tonight, stating that he and Lively “grow together” and “learn from each other.”

Squares are considered one of the hard aspects in astrology, as they can bring conflict and discord — and Lively and Reynolds’ synastry contains a few major ones. However, the most relevant is the square between each star’s Venus placement. Venus is the planet of love, values, and partnerships, so their Venus-Venus square may very well be the aspect that propelled them out of the “friend zone” and into a relationship back in 2011. Romantically, this Venusian alignment can spark instant chemistry and attraction between two people, making it hard to resist the excitement of the connection. While their differing values may sometimes cause friction, there’s plenty of kiss-and-make-up energy to work with in Lively and Reynolds’ relationship.

Even with some stubborn squares, this couple’s bond probably feels like it was meant to be — and that’s thanks to some powerfully positive connections between their Venus signs and the North Node of Fate. The North Node is a point that relates to a person’s lifelong destiny, so when it aligns favorably with lover planet Venus, it can feel like romance is written in the stars. With Lively and Reynolds’ Venus and North Nodes in mutually beneficial aspects to each other, their relationship could be truly life-changing, and they can easily support each other’s spiritual growth and destiny.

Between Lively’s pragmatic Virgo sensibilities and Reynolds’ emotional Scorpio sensitivity, this detail-oriented couple definitely won’t miss a beat — whether it’s an appointment (thank you, Virgo) or a subtle shift in mood (that’s you, Scorpio). Their powerful sun, moon, and rising sign alignments promise a solid foundation of friendship, but their romantic Venusian connections seal their fate as lovers and spices up their compatibility. Overall, Lively and Reynolds’ relationship is destined to change their lives forever — and they’ll have a lot of fun along the way.