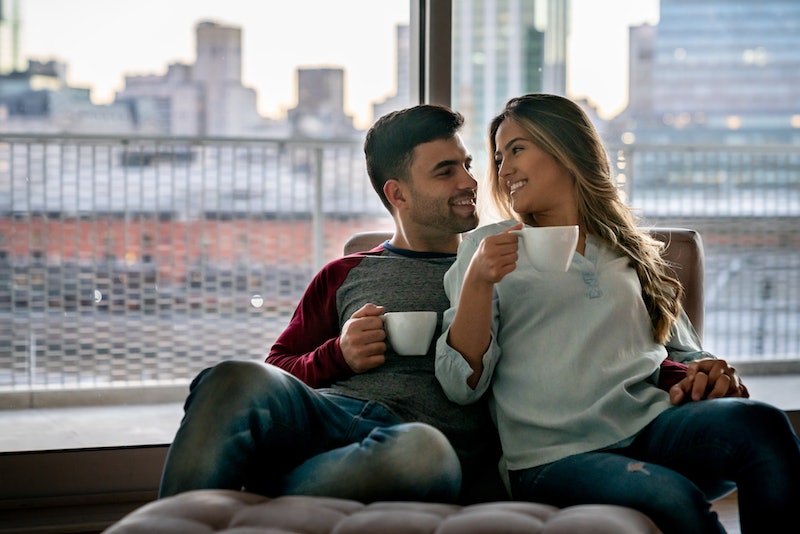 Cancer and Leo zodiac signs are like day and night. The Moon-ruled crab is deeply emotional, sensitive, and introverted, while the Sun-ruled lion is passionate, fierce, and extroverted. Cancers are happiest spending quiet nights at home with their family, while the sociable Leo loves being surrounded by their large group of friends. Their personalities are so different, you might not expect for these two to last — but they’re both true romantics at heart, loyal to the core, and value lasting love. While a Cancer-Leo pairing may not be the most smooth-sailing, it still can be a relationship that’s worth giving a shot. Cancer and Leo’s zodiac compatibility has everything you need to know about this water and fire sign duo.

“A relationship between Cancer and Leo can be a sexy, steamy, and tumultuous, rollercoaster of a ride,” astrologer Mitzye Ramos Ribas tells Bustle.

This is a unique pairing because it’s ruled by the “luminaries”, which are two of the most important “planets” in astrology: the Sun and the Moon. According to Ribas, the light and energy between Cancer and Leo is mirrored by each other. “This can be wonderful, but blinding,” she says.

Cancer is also a cardinal water sign, while Leo is a fixed fire sign. Cardinal signs are the initiators and visionaries of the zodiac. They’re full of ideas and easily embrace new beginnings and change. Fixed signs, on the other hand, are very focused. They’re notoriously stubborn, but once they set their mind on something, they will see it through.

“This is a meeting of shape-shifting water and fire,” Ribas says. “It can work if the water is akin to a river that runs next to a campfire, or it can fail if it's a roaring wildfire that gets put out by gallons of water. Either way, a Cancer-Leo couple will always remember each other.”

Both zodiac signs are romantics — they’ll set the mood by dimming the lights and turning on their special playlist. And are both generous lovers in their own way. According to Ribas, Leo will bring passion and excitement to the bedroom, encouraging their partner to come out of their shell. Leos love feeling adored, and Cancer, who’s attentive, will make them feel desired.

But it’s possible that their libidos may be a mismatch. According to astrologer Kristina Semos, astrologer and owner of AstroOils, Cancer’s sex drive tends to go in waves. This can be an issue for the fiery Leo who is often more in the mood and energetic consistently, Semos says.

Sexually, Leo can open Cancer up and help them explore their bodies more. But sex can also feel one-sided if Cancer doesn't feel emotionally in tune with their Leo partner. According to Ribas, Cancer is eager to please. But if they don't think their feelings are reciprocated, resentments can build between the sheets.

Emotionally, Cancer and Leo have a lot of similarities. They both aren’t afraid to share their feelings. Both signs value family, commitment, loyalty, trust, and emotional safety. They’re also sensitive to harsh criticism and can get a bit clingy at times.

Despite their basic differences, they do typically want many of the same things in life and have the same emotional needs, Semos says, but their approaches are different. “Leo is more bold and showy about it, while Cancer tends to be on the shy side, so there could be some missteps in getting to the point where they sync up and realize how similar they really are.”

According to Ribas, the Leo also has a tendency to be melodramatic. They love big gestures, and will shower their partner with gifts and adoration. Cancers, on the other hand, show their love through acts of service. To them, it’s the little everyday things that matter most. Although Cancer will be fine with Leo’s way of showing love, they will eventually want their partner to be more honest and sincere with their feelings.

“The lesson for both of them is to not project onto each other,” Ribas says. If they can accept each other as they are, their relationship can be harmonious.

Overall, a Cancer-Leo relationship isn’t the most compatible zodiac match for either sign, but it isn’t the worst. In fact, Ribas says it’s not an easy relationship to navigate, but as two people who are loyal, loving, and commitment-oriented they do have lasting potential. If they can establish healthy boundaries and learn how to deal with each other’s way of expressing emotions, this relationship can work.