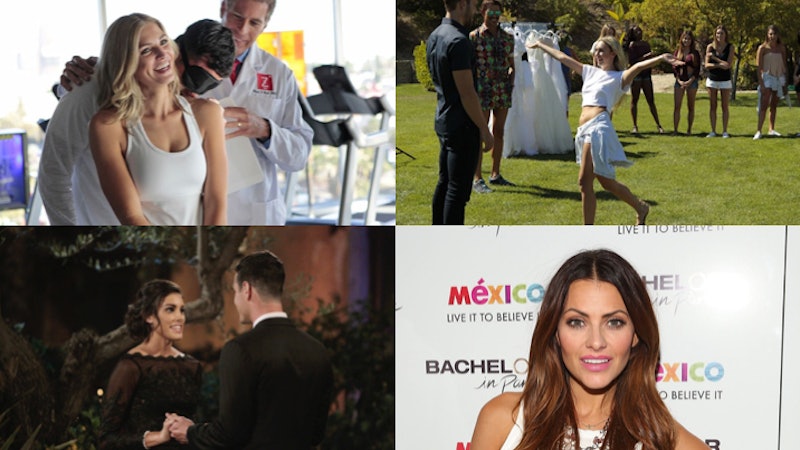 Casting on a show like The Bachelor has been made nearly a literal science. There's always just the right number of blondes, some Laurens, some over-the-top drama queens, a couple of quiet women, one or two "quirky" ones, and then, of course, the villains. You know, the ones who aren’t necessarily going to cause the drama, but they’re certainly not going to shy away from it. They always say early on in the season that they're there to find love, not, as the saying goes, to make friends. Most of the time, these women get turned in to memes and GIFs and ridiculed no matter what they day. Except, really, the women of The Bachelor usually end up being pals with the other contestants more often than they get the guy (only one Bachelor is married to their winner). What if the Bachelor villains really aren’t villains after all?

What if some of the alleged villains on The Bachelor are made of short fuses, stress, and bad editing? There’s only so much you can blame on editing, of course, but reality show producers can very easily manipulate situations and sound clips until they have a completely new storyline on their hands. It’s the magic of television!

Other women sometimes probably are really awful to the other women in a particular moment. But you have to imagine that living in a house all together, with cameras everywhere, and being judged mostly on your looks (sorry not buying that "connection" thing with 20-some other women around) has to be stressful. Who wouldn't snap just a little?

In the moment, it can be easy to see how the public thought of some contestants as “villains,” but looking back, hindsight is always 20/20. Mostly, the people who are villains are just the ones who wanted to put themselves out there with the Bachelor. Oh, and gain Instagram followers. Most want that, too. But in the interest of fairness, let’s take a look at some of the Bachelor Nation“villains” that weren’t actually all that bad and deserve a little more love.

Corinne was the blonde temptress of Nick Viall’s season. She ate cheese pasta and had a nanny, and she was barely in her 20s. Corinne was sexually forward with Nick, which angered the other women on the show. According to Us Weekly, she later said that she felt slut shamed by the experience and I don't blame her. Corinne may have been stuck up at times, but Corinne’s not a villain. She was just a young woman who was trying to figure out how to be in a relationship on national television.

Different season, same story. Michelle was all over Brad Womack on his second season of The Bachelor (because he chose not to pick anyone the first time, sigh), and the other women didn’t like her forwardness. But why should she be faulted for going after what she wanted? Michelle redeemed herself in the eyes of the public on Bachelor Pad, but she should have never been on the you-know-what list in the first place.

Usually, when you’re on The Bachelor, you go to date the Bachelor. But during Jake Pavelka’s season, Rozlyn was accused of making other plans She allegedly had an affair with a producer during filming. Chris Harrison said at the time that he had corroborating reports of their relationship, but Rozlyn has always denied the encounters. Since there is no concrete proof, I’m on Rozlyn’s side on this one. Why don't women ever get the benefit of the doubt?

Ah, Lace, who was a needy vortex on Ben Higgins’ season of The Bachelor. Lace demanded a lot from Ben — including uninterrupted eye contact — but what it really seemed like, looking back on it, was that Lace just wanted to spend some time with Ben and that she, like anyone in an awkward situation like The Bachelor, dipped into one too many cocktails. The Bachelor is a tough experience to acclimate to, and Lace was trying to get Ben’s attention the best she could.

During Chris Soules season, fans had no idea she was. It wasn't until Bachelor In Paradise that she became known as a "villain" for crafting a backstory with Joe to explain why they knew each other. But really, all she ever did was not understand the concept of a "hot mic" and in light of Colton's behavior with former contestants, this was pretty harmless.

Fans initially called her the "Regina George" of Bachelor Nation during Arie's season, and to be fair, she was seemingly pretty mean to some of the girls. (Remember that breakdown she had when Arie decided to include the rest of the girls on night out? Sheesh.) But maybe she was just looking for love, because on Bachelor In Paradise as soon as she connected with The Goose, she was pretty nice! Now, they're happily engaged, so maybe it was just the situation that made her seem so mean.

Kelsey and Ashley Iaconetti had the best two-on-one date of all time, in that it was awkward and terrible to watch. Kelsey had some over-the-top moments on Chris Soules’ season of The Bachelor, but she was in mourning — her husband had suddenly died a short time before the show. She was accused of using her husband’s death for gain on the show, but can a grief-stricken woman be allowed to process in her own way, please? Not fair.

OK, hear me out on this one. Courtney was awful on the 16th season of The Bachelor. She was mean to the other women and was even booed at the reunion. So, yea. That's bad. But she did win her season and ended up engaged to Ben Flajnik, although she ended it back in 2012. Then, she wrote a book called I'm Not Here To Make Friends and even briefly dated Arie, proving that she was definitely on the show for one sort of right reason: fame and fortune. You have to respect the hustle.

Olivia was also on Ben Higgins’ season of The Bachelor, and all the other contestants instantly hated her. Why? Well, she told Ben that the other women weren’t… that smart. That’s not going to ingratiate you to anyone, of course, but think about being forced to live with 25 other women you have nothing in common with. What would you even talk about? The bullying came out full-force against Olivia (especially by twins Haley and Emily Ferguson), but Olivia deserved none of it. She was just in an uncomfortable situation.

Colton’s new season of The Bachelor starts soon, but let’s remember — with every so-called villain, there’s another side to the story.