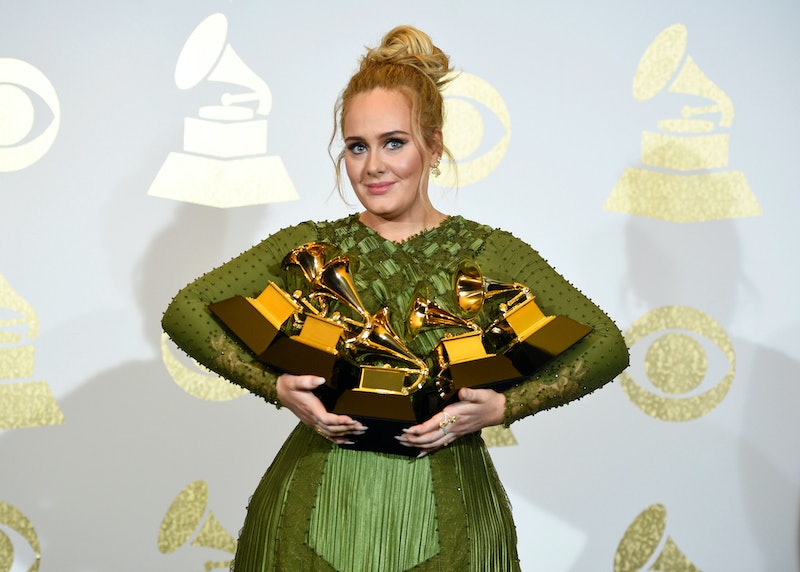 The Grammy Awards — aka music's biggest night of the year — is set to stun once again with another round of electrifying live performances, drunken speeches, and contentious winners. While preparation is well underway, and families across the US are already getting the popcorn ready for their viewing parties, you shouldn't feel like you're missing out on the fun just because you live in the UK. The Grammys cause huge annual hype across the globe, and you can watch it along with everyone else. Here's how to watch the Grammys in the UK.

The 61st Annual Grammy Awards Ceremony is set to take place at the STAPLES Centre in Los Angeles, on Sunday, Feb. 10, and will have you pulling a late night, as it commences at 5 p.m. GMT and rounds off the next morning at 1 a.m., according to Smooth Radio. Yep, the Grammys really require a valiant viewing effort. It's a long stretch.

Whether you're in it for the long run, or just want to keep up with the winners, The Sun has suggested numerous places where it's available to watch in the UK. While it won't be broadcast on UK TV, they report, there a plenty of ways to stream the awards online.

You'll be able to stream the ceremony via CBS All Access, but it won't come cheap, with subscriptions starting from $59.99. If you're not up for splashing that kind of cash, then the awards are also available to stream if you have a subscription to Youtube TV or Playstation Vue.

You'll also be able to watch and comment along with the rest of the word, as the ceremony is also conveniently set to stream live on Facebook. And, if you're not in it for the full experience, but just for the headlines, then you'll be able to get updates of all the big news and winners by following The Grammys on Facebook, Twitter, and Instagram.

As well as getting to see who'll take home the awards for Album of the Year, Song of the Year, and Best New Artist, you'll also get to see performances from the likes of Cardi B, Janelle Monáe, Diana Ross, and plenty more, Billboard reports. Oh, yeah, and one of those performances includes that baffling — but hella exciting — collab with St. Vincent and Dua Lipa.

And, perhaps most exciting of all, you'll see all of that fun and frivolity presented by the legendary Alicia Keys, as the singer is set to host Sunday's ceremony, Bustle reported on Jan. 19. While Keys might seem like a wildcard choice, that's definitely not the case. "I know what it feels like to be on that stage, and I’m going to bring that vibe and energy," she said in a statement, as Billboard reported on Jan. 15. And besides, Keys oozes charisma and kindness.

I gotta say, I'm more into her than last year's host, James Corden, anyway. I think this is set to be a Grammys to remember, and Keys will make it better still.