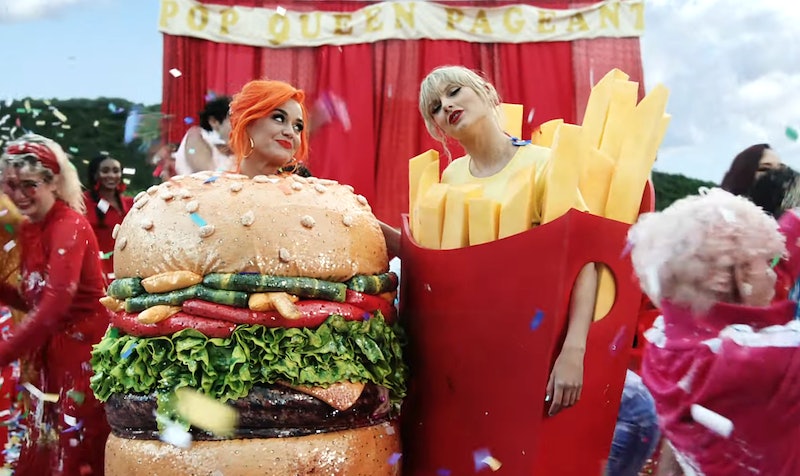 Is there anything better to mark the end of a feud than a wedding? Well, two pop stars might just find out, as reports are circulating that Katy Perry may invite Taylor Swift to her wedding. A source reportedly told Entertainment Tonight that Perry and fiancé Orlando Bloom are discussing having a wedding in the fall, and that Swift just might be on the guest list. After a years-long feud, the two made their reconciliation known publicly in Swift's "You Need To Calm Down" music video. So if this claim to ET proves to be true, then their friendship goes even deeper than cameos in music videos.

Perry and Bloom got engaged in February and although the "Never Really Over" singer had previously said she wanted to take things slow, the couple has reportedly begun to start their wedding planning in earnest. "They are so ready to start their new life together," the source told ET. "Their plan is to have a close friends and family wedding in the fall, but are keeping many of their plans private." It's not clear if the couple will have another, larger wedding later, but one not-so-private aspect of their wedding planning is that Swift could land an invite. "They’ve already talked guest list, and have even talked about including Taylor Swift!" the source said.

The pop feud between the two singers was at its peak in 2014 when Swift released the song "Bad Blood," which was purportedly about Perry "sabotaging" Swift's Red tour by hiring some of Swift's backup dancers, as Swift explained to Rolling Stone. But the drama and ill-will continued long after that. Yet, things took a turn for the better in 2018 when Perry sent Swift an olive branch for the start of her Reputation tour.

Although they made the end of their feud happy-meal official in Swift's latest music video, they've reportedly been doing well for some time now. Swift told the U.K.'s Capital Breakfast radio show that they have been on "good terms" since the whole olive branch incident. After all, how can you remain mad at someone when they send you something so wacky and iconic as the universal symbol for peace? According to Swift, they just wanted to make sure they were "solid" before letting all their fans in on this rekindled friendship.

Right now, Bloom and Perry's wedding guest list is purely speculative. But depending on how large they go, there could be another feud to watch out for on their big day. Perry may possibly also invite Kanye West and Kim Kardashian. Perry and West collaborated on her 2011 song "E.T." and have kept in contact since with Perry and Bloom attending West's Sunday Service concert and church service in March 2019. And while it's not super well-documented, it appears that Perry has her own friendship with Kardashian as well. Perry even noted how Bloom's extravagant proposal was like something West would do for Kardashian in an interview with Capital Breakfast.

If both Swift and West were to be invited and attend the wedding, it could possibly start the next chapter in the Swift-West feud. The issues between Swift and West started in 2009 when he infamously interrupted her acceptance speech at MTV's Video Music Awards. While they seemed to move on from this moment, the pair began feuding again — with Kardashian jumping in and defending her husband — when he released the song "Famous." Kardashian seemed to call Swift a "snake" in a tweet and Swift had addressed this time and time again, using snake imagery in her work and even featuring a giant snake during her Reputation tour.

Currently, Swift seems to be in a better place regarding the entire Kimye feud. She's turned in her snake imagery for butterflies for her upcoming Lover album, and doesn't seem interested in fighting anymore. If these reports and rumors are true, Swift and Kimye may come face-to-face at Perry's wedding. And hopefully, another feud could be squashed along the way.

"This is Katy and Orlando’s day and they are going to create a special moment that best represents their style, which means a beautiful celebration of their love with the people they most care about," the ET source said. And that's what's really important. Celebrity feuds come and go, and at the end of the day, Perry and Bloom's wedding should be about the two of them, not any celebrity feuds.