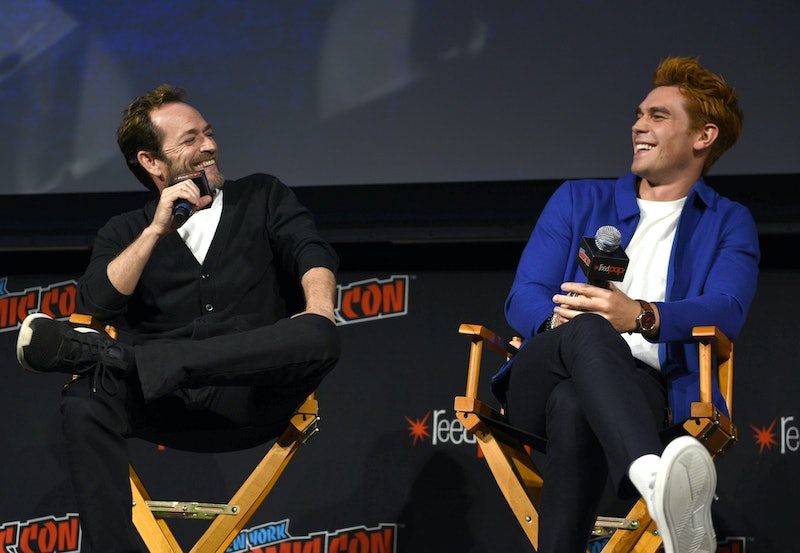 Following the death of Luke Perry on Monday, March 4, KJ Apa has opened up about losing his Riverdale dad. On Thursday, March 7, Apa posted a tribute to Perry on Instagram. Perry, who died at the age of 52 after experiencing a massive stroke, portrayed Archie Andrews' dad Fred on The CW series since the pilot, and shared a lot of scenes with Apa, who played his onscreen son. And in the days since the actor's passing, many Riverdale cast members have shared tributes to Perry on social media.

Due to their close relation on the show, the 21-year-old New Zealand actor shared a lot of screen time with Perry on Riverdale, and the bond between this onscreen father and son duo evidently extended beyond the show. Apa addressed his costar's death on Thursday by sharing a photo of Perry looking peaceful, with the wind in his hair, while riding on a boat. Apa included the simple message, writing, "Rest in Love bro."

Apa's tribute joins those from fellow Riverdale stars Camila Mendes (Veronica), Madelaine Petsch (Cheryl), Lili Reinhart (Betty), and Cole Sprouse (Jughead), who have each posted their own messages of mourning. Meanwhile, the entire cast and crew were given a few days to grieve as production of the TV show was temporarily shut down following Perry's death.

This tribute from Apa joins many others from celebrities and Perry's costars over the years. Perry was best known for portraying Dylan McKay on Beverly Hills, 90210, and his co-stars from that iconic '90s show, including Tori Spelling and Shannen Doherty, have also been sharing memories of their time with Perry. On March 5, Perry's daughter Sophie wrote how much all the "beautiful and heartfelt messages" from celebrities and fans have meant to his family.

Over the course of Riverdale's three seasons, Apa had shared his admiration for Perry. Back when the fourth episode of Riverdale premiered in February 2017, Apa tweeted, "Love working with Luke." Apa also acknowledged the 90210 actor for the iconic '90s figure he was when he posted an older shot of Perry on Instagram in June of 2017, simply with the word, "Legend." Apa even called them the "dream team" in one Instagram post. And in October of 2018, Apa and Perry told the Today show that they "hang out a lot outside of set," so there was apparently a lot of love and mutual respect there.

Riverdale Season 3 is currently airing, and Perry briefly appeared in the March 6 episode, which was dedicated to the actor. It's unclear how many more episodes Perry will appear in this season, and no details of how the series will address Perry's death has been revealed yet. However, showrunner Roberto Aguirre-Sacasa declared on Twitter that every episode from here on out will be dedicated to the man behind the Riverdale patriarch.

The many posts about Perry are proof that he touched so many people's lives — whether they had the honor of knowing him directly, or just through their TV screens. The world will continue to mourn his loss, and, as Apa's post makes painfully clear, the town of Riverdale will never be the same again.