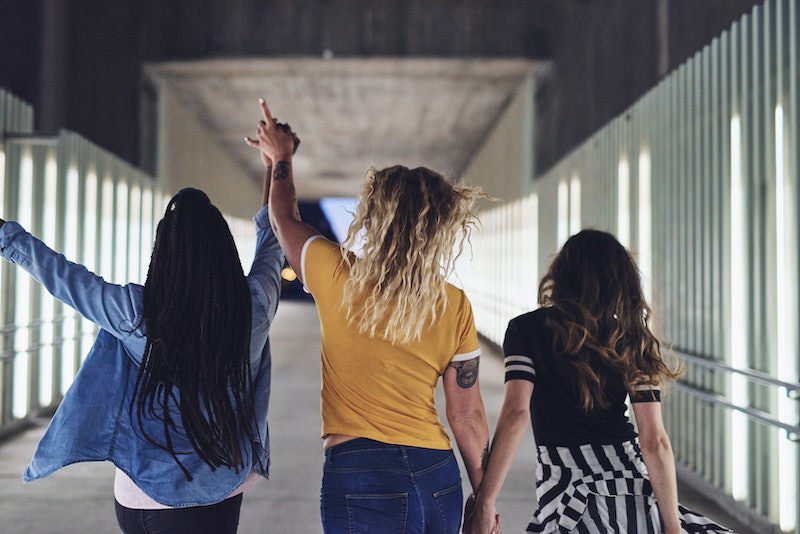 From a very early age, I knew that I had a deep-seated desire to be liked. There were so many ways in which I stood out from my peers that my one recourse to being a desirable friend option was to mold my personality in order to fit in with the people around me. My technique was to adapt, or suffer the consequences. It was this type of thinking that led me straight into accepting unrequited friendship — but now, I'm finally ready to give it up for good.

An unrequited friendship, much like an unrequited crush, is purely one sided. An unrequited friend will take advantage of your compassion, but is unable to offer up anything in return. They'll take you up on your offer of an early-morning yoga class, but won't ever accept your invite to go out to dinner (where, heaven forbid, they might be Instagrammed with you). They'll call you in the middle of the night, in a panic over a relationship problem or issue at work. You'll listen patiently, offering your support and advice when needed. But upon hanging up, you'll have the realization that you can't actually recall the last time they asked about what's going on in your life.

My first unrequited friendship began in elementary school, but continued through the beginning of high school. She was a classmate of mine who, like me, fell outside the standard set for popularity. When other kids were listening to boy bands, she was rocked out to punk music. Instead of re-enacting scenes from Legally Blonde during recess, she set up her own business selling sticks she found on the playground. We became friends when I approached her during lunch period asked if I could buy into the trade. She said no. I tattled on her to our teacher, who shut down the entire operation. Impressed, she decided to take me under her wing.

While I was incredibly proud of our new alliance, it was apparent that my new friend was not. Although it would take years to admit this to myself, she took large strides to hide me from her world. My invitations to her lavish birthday parties would get mysteriously lost in the mail. She would forget to introduce me to her other friends at school dances or co-ed mixers.

The older we grew, the more often she would put down my appearance. She would rate my attractiveness well below average, and then tell me that I was her pet project, a work in progress. (This was, of course, an excuse to keep me away from her fabulous friends and potential suitors.) And the worst part was, that I believed her — I had convinced myself that I wasn't worthy of her affection, at least not the same kind of affection I'd given her.

But regardless, I stayed in that toxic, unrequited friendship for years. Her friendship mattered to me: she was the first person that I had offered myself to, wholly. It took her sudden decision to literally move away for me to realize that she had never given anything back. It took the rest of my high school years to rebuild my depleted confidence.

As I grew more grounded in who I am, I found true friendship with others where I least expected it. But the sneaky unrequited friend still continues to slip into my life when I least expect it. There was the one college classmate who I tried to convince not to transfer, who then went on to declare me "a bore" behind my back. (Who even says that? I thought.) Or the adult friendships I'm in now, who expect me to give them non-stop attention, but can't be bothered to answer my texts. Despite my experience growing up, I still find myself falling into the familiar patterns of befriending people who demand the world of me, knowing I'm ready to offer mine up on a platter.

So why do we engage in unrequited friendships? Perhaps, like in romantic relationships, we hold out hope that we can truly change people, and once they are changed, the reward of their empathy — of their love — will be worth it. Or perhaps we are stubborn in our thinking, resistant to the idea of being “a quitter." We don’t want to leave people in our lives halfway through their journeys; we deserve to see how the story ends. Unrequited friendships are like Netflix shows that we want to stop watching after the second season, but feel overly committed to the plot, no matter how emotionally draining they might be. So we end up marathoning twelve whole seasons, instead of getting out of bed and taking care of our own lives.

After many years of pouring so much my energy into other people, I'm exhausted. So I made the decision to quit unrequited friendships once and for all. I plan to turn my attention fully to all the wonderful friends I have had the pleasure of making over the years, with whom I share mutual respect and appreciation. I am going to stop worrying about those around me, and instead focus on improving my well-being. Because if there's one thing i've learned, it's that the most important reciprocal relationship to be in, is with yourself.