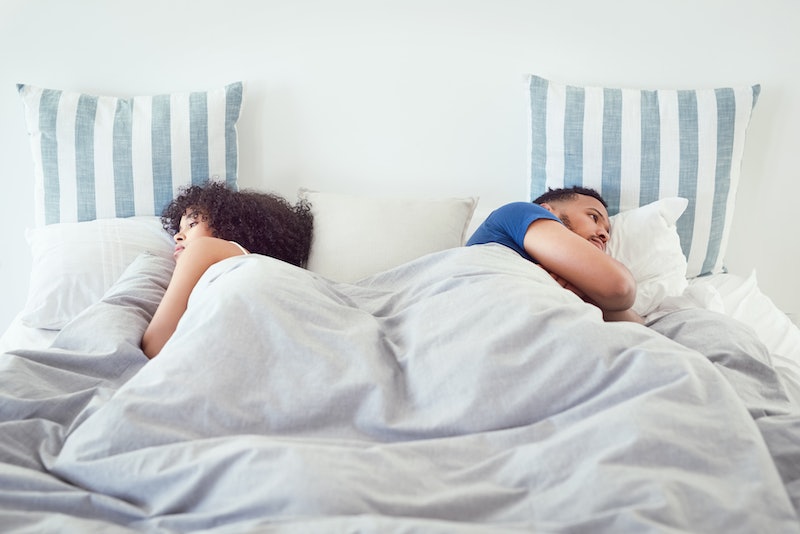 We’re always hearing that we could be having better sex, a better orgasm, or a better relationship. But how often do we actually hear the nitty-gritty details of how we might actually achieve those things? Bustle has enlisted Vanessa Marin, a licensed sex psychotherapist based in San Francisco, to help us out with the specifics. Our latest topic: What to do when your partner wants sex more than you do.

Q: Do you have advice for what to do when you and your partner are on different pages about how much sex you should be having? My boyfriend always wants to have sex, but my sex drive is way lower (he would be happy with sex every day, while maybe 2-3 times a month would be fine for me). I’ll admit that sometimes I turn him down because he can be so demanding and whiny when he initiates, and it turns me off. I don’t want to break up, but I don’t want to fake being into it when I’m not. What should I do?

A: In my experience as a therapist, this is the most common argument couples have about sex by far. I think a lot of people operate under the belief that “healthy” or “normal” couples are supposed to always want sex at exactly the same time. This couldn’t be further from the truth. Would you expect to be completely in sync with your boyfriend with any of your other needs? Should you always want the same thing he does for dinner, or should he always want to watch TV when you do? Of course not!

Sexual desires and needs vary so much from person to person that it’s impossible to ever be on exactly the same page. What’s more important than arbitrarily deciding how many times to have sex every week is to get more skillful at negotiating each potential sexual interaction. So if your boyfriend wants sex all the time but you don’t, or if he has a higher sex drive than you, here are five crucial steps you can take:

I think it’s important for couples to talk about their sexual initiation patterns. It sounds like when your boyfriend wants sex, he’s maybe initiating it in a way that isn’t exactly inspiring you to say yes.

What sort of feedback could you give to your boyfriend about better ways to initiate sex? Is there anything he could do or say that would make you feel more interested in connecting with him in that moment? Maybe if he offered to give you a back massage first, or if he used an inside joke that always makes you laugh?

You might also want to talk to him about how his current approach is affecting you. I’m just taking a shot in the dark about your feelings, but you could say something like, “Sometimes when you initiate sex, I feel like you’re already upset with me or disappointed with me. That makes me start to feel defensive, so I shut down, which I know is the exact opposite reaction you were hoping for.”

A lot of couples initiate sex non-verbally, which can start to cause confusion and stress. Both you and your boyfriend can practice saying, “I want you” or “I’m so turned on right now.” Use your words when you’re turning each other down, too. If he knows you’re not in the mood because you’re stressed out from work, he’s less likely to take it personally.

Don’t Think You Have To Decide Immediately

Because of this, I encourage many of my female clients to give themselves a little bit of time for foreplay. Think about your own natural rhythm: Are you usually good to go right away, or do you take some time to get turned on? Try to estimate how much time it generally takes you to get aroused, and give yourself that much time before saying “yes” or “no.”

Have Other Kinds Of Sex

Keep in mind that responding to your boyfriend’s initiations isn’t a black-or-white decision. You can say yes to kissing, massage, or foreplay, without saying yes to sex. If you’re not in the mood when your boyfriend wants to have sex, take a moment to ask yourself if there’s something else that sounds appealing to you. If you eliminate the pressure of feeling like it’s an all-or-nothing decision, you’re more likely to be open to being intimate.

Examine What Sex Means To You

If it truly feels like he’s using sex to essentially masturbate inside of you, that’s a different issue. But the two of you may realize that sex is sometimes about connecting with each other, spending quality time together, soothing anxiety, being playful, or giving each other pleasure. If you’re able to recognize that when your boyfriend wants sex, it also means he wants to feel close to you, that may soften up some of the resentment you feel toward him right now. And if that’s not the case? Well, then you have every right to take major issue with that.

Recognize The Importance Of Sexual Compatibility

Most people don’t value sexual compatibility enough. We give more weight to other things, like looks, money, life ambitions, and shared values. I’ve worked with lots of couples who clearly knew that they were sexually incompatible, even from the early stages of their relationships. They continued dating anyway because they didn’t think their lack of compatibility was a good enough reason to break up.

In my opinion, sexual compatibility is one of the most important aspects of a relationship. You’re never going to be on exactly the same page; sometimes you may feel that your boyfriend has a higher sex drive or wants to have sex more than you do. But every day and once every other week are pretty different. Your sex life can be improved by following the steps I’ve detailed above, but some discrepancies are just too big.

Take the time to think about whether or not this relationship is working for you. Are you sexually satisfied? Can you envision this sexual dynamic in the long term? At the end of the day, you’re the only person who can make the call about whether these differences feel surmountable or not. I wish you the best of luck.