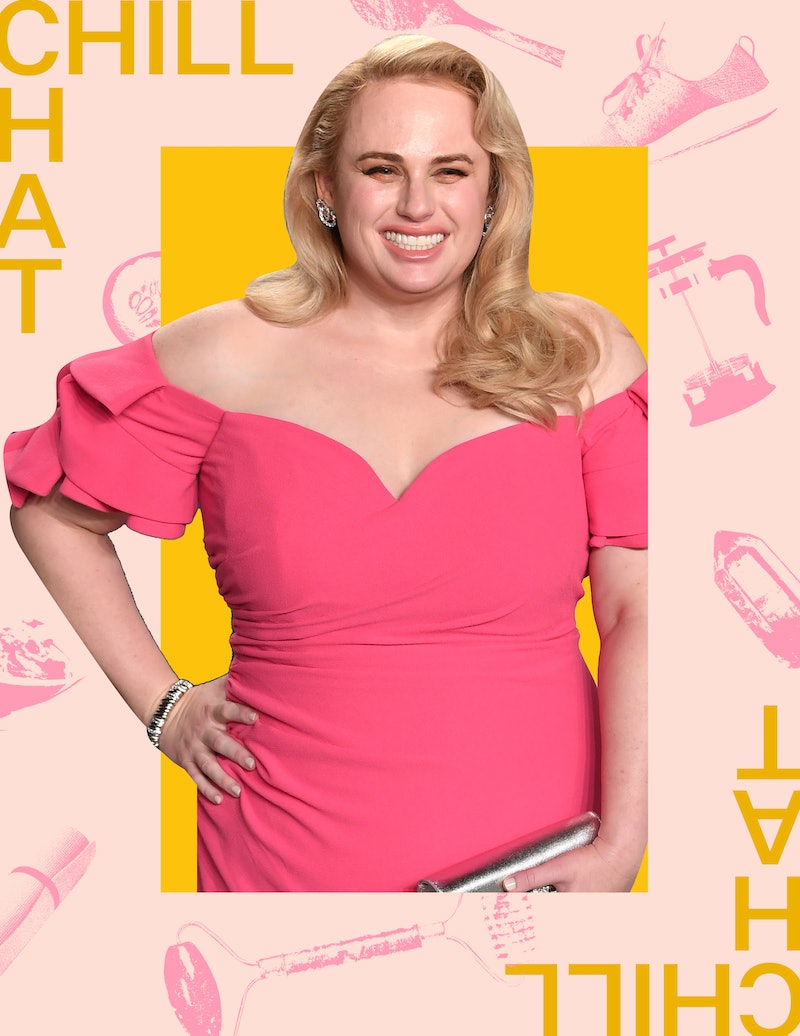 In Chill Chat, Bustle sits down with stars to chat about all things wellness, from their ultimate workout playlists to their most reliable self-care hacks. Here, Rebel Wilson shares her morning routine and the massage treatment she swears by.

Before 2020 came around, Rebel Wilson already decided it was going to be her “year of health.” “It originally started because I was interested in fertility stuff and freezing my eggs, and the doctors told me if I’m healthier, I’ll get a much better result,” she tells Bustle over Zoom. “But up until two years ago, I had zero wellness or self-care [routine].”

The 41-year-old comedian, actor, and producer says that she used to travel all the time and not prioritize taking care of herself, all on top of a battle with emotional eating. “So I realized I was going to dedicate the year to embark on a health journey,” says Wilson. She kicked it off by going on a “lavish” Austrian health retreat — and then the pandemic and subsequent lockdown came. Translation: She had to learn how to fine-tune her wellness regimen on her own time.

The biggest lesson Wilson’s learned over the past year? “I’m trying to have much more of a balance,” she says. “I used to be go-go-go 24/7, and so I’ve come to that realization that you can’t just do movies and stuff back to back all the time and work 20 hours a day. It’s not a healthy thing.” Now, Wilson — who’s partnered with supplement brand Olly — notes she’s set up a decent routine for herself. “You don’t need to go to a fancy [wellness center] to be healthy,” says Wilson. “The day-to-day stuff is easy — it’s more about going on walks and concentrating on what you’re eating and doing the emotional work, like listening to podcasts and audiobooks, which most people can access.”

Here, the star — who recently finished shooting the upcoming film Senior Year — reveals her go-to self-care practices, how she sets up the perfect bath, and the weirdest wellness treatment she’s ever gotten.

OK, so I’m a bit weird — I don’t drink coffee ever, and I don’t drink matcha. Sometimes when I’m filming at night and need a bit of caffeine, I’ll drink a Diet Coke.

Regularly, I like getting up at around 8 a.m. and doing this gratitude practice where I think about five things I’m grateful for. I’m not sure if I picked it up from Oprah or one of the podcasts I listen to, but it makes you start the day in a positive mindset. I stupidly then always look at Instagram, which I know I shouldn’t. My phone stats said I was on my phone for seven hours one day last week — I’ve got to stop. After that, I’ll usually go to the gym and work out.

What’s your favorite way to work out?

Literally just walking. I used to be pretty sporty as a kid and I played tennis and basketball at quite a high level, so I also really enjoy going to the gym. I’ve been training with Gunnar Peterson here in Los Angeles, and I really like lifting, too.

What’s always on your workout playlist?

I go through phases. I’ve been writing a movie about girl groups, so I have a lot of Little Mix. For when I go hiking, I like a lot of hip-hop songs with an attitude to power me up, like Megan Thee Stallion or Cardi B.

I have a bubble bath pretty much every night — I just think they're so luxurious. I normally put in Epsom salts because athletes have given me the tip that it helps release all your muscles. So I do that, and I also put in all these oils and light candles. I also have a TV though for watching reality television shows... I have a little chair my laptop sits on so I can watch Below Deck while I’m in the bath.

I’ve given everything a go. I’ve tried cryotherapy. I’ve had one colonic, which was the scariest thing ever. It was very invasive. I’d say the thing I do regularly is a lymphatic massage, which is all the rage here in Los Angeles. It’s kind of weird because they press you in very particular areas... some are more personal. And they press on the lymph nodes to help you with higher immunity, a better digestive system, and it kind of helps with de-bloating.

One thing I did in Austria that was pretty weird was a water shiatsu massage. You just kind of float in a pool and a lady sings Austrian folk songs to you, and you relax and do nothing — you lose all consciousness of where you actually are because it goes on for 90 minutes. You really have to just go with it, but I enjoyed it.

What do you need to get a good night’s sleep?

I’ve been taking these Olly Sleep gummy vitamins for like 18 months. For some reason, melatonin is illegal [without a prescription] in Australia — so this is a hot commodity. It just helps me sleep deeper. I take two, put on a reality show, and then I’m normally dead asleep within 15 minutes.