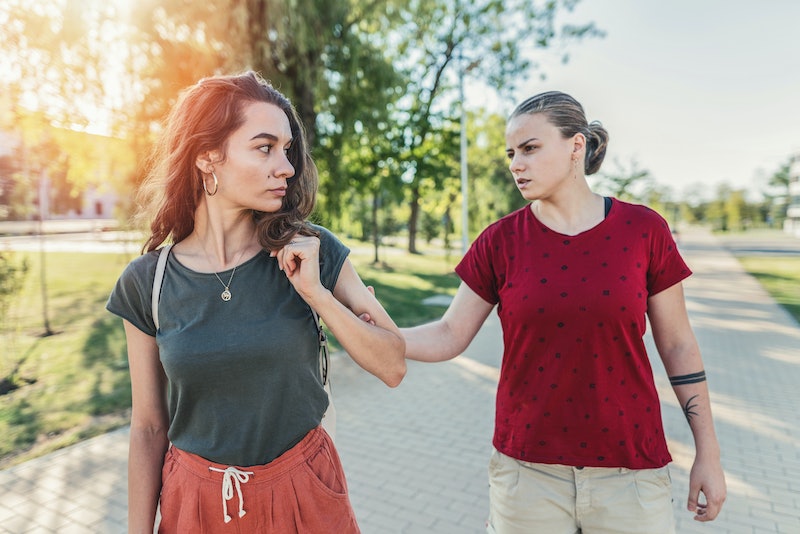 It can be really tough to tell when you’re being used in a relationship. Not only are there multiple ways to be used — financially, sexually, or emotionally, for example — there also tends to be a lot of deceit and manipulation involved, all at varying degrees.

“On the less destructive — but still problematic — end of the spectrum, [a partner might be using you] to avoid loneliness,” Dr. Carla Marie Manly, a clinical psychologist, speaker, and author of upcoming book Date Smart, tells Bustle. They might start a relationship with you in order to fill a gap in their life, to find sexual fulfillment, or to alleviate a financial burden, without realizing that they’re being toxic and unfair.

Manly calls these “convenienceships” because your partner is using you to meet a need without the intention of investing further or giving back. If the scales are always tipping in their favor, chances are you have a user on your hands. There’s also an extremely toxic end of the spectrum, Manly says, where a partner might use you for sheer financial gain or to have someone to bully and control.

In any case, “using” connotes dishonesty and manipulation — and that can really take a toll. “The deceit factor causes significant mental and emotional harm,” Manly says. “When you realize that a partner has been using you, it’s normal to feel sad, upset, and angry. Using another person is absolutely disrespectful, and it never feels good to be disrespected — especially by someone who says they love you.”

Here are 11 signs your partner may be using you as well as how to fix the problem.

1. They Show Signs Of Disinterest

If someone maintains a relationship with you, while also showing little to no interest in your everyday life, take it as a sign something’s up. “Most often when someone is using another they will show signs of disinterest in conversations, in the other’s activities of choice, and in their likes and dislikes,” Tina Sadri, LMFT, a licensed marriage and family therapist, tells Bustle.

It might seem like your partner isn’t fully listening when you speak or they might constantly forget to ask how you feel, even while claiming to care. Their disinterest may show up in less obvious ways as well, including asking other people to join you on dates, Sadri says.

This is often done as a way to disperse the attention across a group. If you go out with others, your partner won’t have to invest as much time or attention in you. They will, however, get to say that they “took you out” as a way of feigning interest so the relationship remains intact.

2. They’re Suddenly Super Nice When They Want Something

While they may seem distant and disinterested most of the time, a partner who is using you will likely come on strong when they want something. They’ll switch from being checked out to super nice — and then will ask a favor soon after.

Now, that’s not to say that a partner who asks for help is automatically a “user.” There isn’t anything wrong with lifting someone you love out of a financial bind, taking over one of their chores when they’re busy, or making a greater effort in the relationship when they’re going through a tough time. Doing these things is a sign of love and support.

It’s only a problem if there’s a consistent habit of not caring, and then pretending like they do because they want something. “If you feel like you're giving more than you're getting and you struggle to feel like you're cared for in a way that elicits a sense of balance, safety, and trust, something is awry in the connection and should be addressed,” Rachel Greenberg, LCP, a clinical psychologist, tells Bustle.

3. They Have Weirdly High Expectations

If your partner is using you, they might have very high expectations when it comes to your achievements — but not because they’re cheering you on or rooting for you to achieve your goals. Rather, they’re invested because they’re concerned about what you can do for them. “For example, they may expect to be invited to events that would benefit them socially or financially,” Sadri says.

It’s why your partner wants to tag along at your work events or asks to hang out with your friend who knows someone in a field they’re interested in. To them, it’ll be all about networking and moving up. They may also encourage you to take higher-paying jobs and then guilt-trip you if you say you aren’t interested. It’ll feel like they’re encouraging you, but it’s only because they see something in it for them.

4. You Feel Uneasy Around Them

According to Amalia Sirica, LCSW, a licensed clinical social worker, your body can tell you a lot about someone’s intentions, so pay attention to how you feel whenever you talk to or hang out with your partner. Do you get jittery? Do you tense up? Do you feel angry for seemingly no reason? Physical and emotional reactions like these might be a sign your partner doesn’t have your best interests at heart, even if you can’t put a finger on why.

5. They Cross Your Boundaries

If your body is reacting negatively, it might be because your partner pushes past your boundaries. So pay attention to moments where they cross the line, both big and small.

“You can learn a lot about someone by the way they respond to your boundaries,” Sirica says. “A person who is in a relationship with someone because they like you will usually respond to boundaries with ease and understanding, even if it takes them a minute sometimes.”

If your partner is being extractive or “using,” the opposite will be true. They’ll likely get really angry and push back against your boundaries, Sirica says, “instead of adjusting their behavior as they’ve been asked to. In other words, they won’t be respectful.”

If you’re feeling used, consider the balance of your partnership. “A partner who is using you will generally have a lopsided, inequitable approach in the relationship,” Manly says. “This can manifest in financial, emotional, and physical ways.” It might feel like you’re always the one to pay for things, to plan things, to buy gifts, and do chores — and they never seem to meet you halfway. “If your partner seems unwilling to return the favor, or unexcited to give back, chances are they’re using you on some level,” Manly says.

Similarly, you’ll notice that they don’t seem to feel bad for taking, taking, taking — and never giving back. In fact, they might even find a way to make you feel like you “owe” them something. As Manly says, “People who are users often feel entitled to give nothing or ‘get’ more than they give.”

8. They’ve Created A Sense Of Resentment

With all the favors, the guilt-tripping, and the outlandish requests, you may notice that you start experiencing some form of resentment, clinical psychologist Kim Chronister, Psy.D., tells Bustle. This won't be the case in a balanced relationship where everyone's needs are being equally met. If you’re genuinely being used, you’ll start to feel like a dried-up well.

Manly echos this saying, “When a partner tends to engage only for superficial reasons — a desire for sex, to fill a loneliness void, or to have a companion for an event — you’re being undervalued and under-appreciated.”

If your partner claims they want a “relationship,” but doesn’t seem interested in actually committing, take note. As Deborah J. Cohan, Ph.D., an associate professor of sociology at the University of South Carolina Beaufort says, a user won’t want to move the relationship past the early stage where they get everything they want — sex, attention, someone to hang out with — without any of the commitment or responsibility.

And there could be any number of reasons for this. “We are a culture that prioritizes being in a couple and sometimes people want that feeling more than they actually want to be with the actual person,” Cohan says. “For someone being used, this can really take a toll emotionally because a person might feel like they are not good enough, that they are not high enough priority for someone, that they can be easily taken advantage of, and question their overall sense of worthiness.”

If a partner is acting a bit lopsided accidentally, you’ll notice that calling them out results in an apology and different habits going forward. But if someone is using you on purpose, you’ll likely notice that they get defensive and argumentative the moment you point it out, Keischa Pruden, LCMHCS, LCAS, CCS, a therapist and owner of Pruden Counseling Concepts, tells Bustle.

Instead of being willing to talk about finances, or your sex life, or outside friendships, they’ll shut the conversation down. And that is not OK. “If a person in a relationship is not willing to listen to the other person's concerns and work towards a mutually satisfying solution,” Pruden says, “it may be time to evaluate your situation and see if this relationship is [...] beneficial.”

11. They Act Different Behind Closed Doors

If you find yourself wondering, “Am I being used?” you should also look at how your significant other behaves in private. “Users can often be tremendously charismatic and their appealing qualities can make it hard to see what’s really going on,” Manly says. “However, partners who use others tend to give themselves away through serial red flags that share a common theme of being self-entitled.”

You might notice, for instance, that they drop the act of being nice behind closed doors or after they do one nice thing. “A partner who is using you will often have a sense of indifference,” Manly says. “A lack of investment in your thoughts, feelings, and needs is often a sign that you’re being used — and not being given the consideration and respect you deserve.”

Again, it’s so easy to get swept up in a relationship like this, since users have a way of rationalizing and excusing their behaviors. But by taking a step back, Manly says, you will begin to be able to see that manipulation and self-absorption at work.

What To Do If Your Partner Is Using You

Let’s say some of these red flags stand out and it seems like your partner is using you. The first thing you should do, if it feels safe, is have that conversation where you explain the imbalances you’ve noticed and how they affect you.

“Address the issue directly and respectfully,” Manly says. “For example, if you feel that your partner has been using you financially you might say, ‘I’ve realized that I’m paying all the rent and most of the expenses. It would feel fair and balanced to share expenses equally.’”

If your partner doesn’t step up and make a change, or seems completely disinterested in your feelings, that’s when you’ll know you’re with a true, malicious user — someone who won’t ever apologize and change. At that point, Manly says, “the wisest option is generally to cut your losses and move forward with self-respect.”

This article was originally published on May 5, 2016