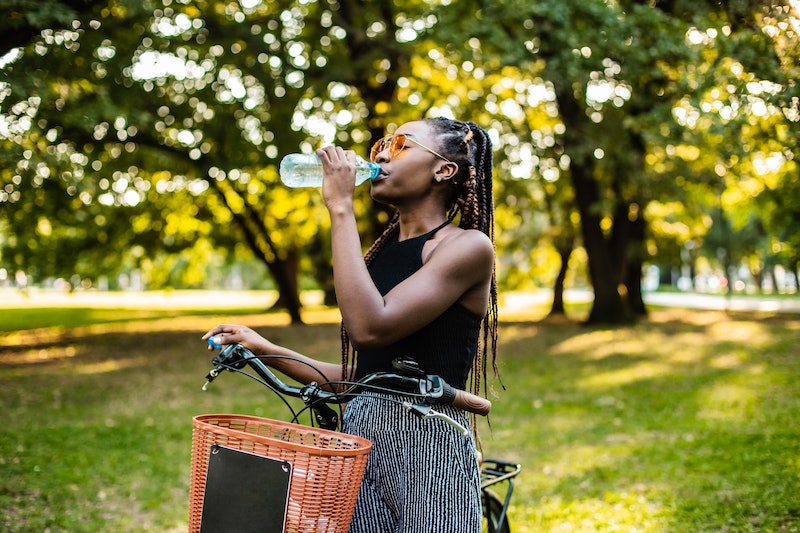 If you're sober-curious, or just want to spend a little time hangover-free, you may have heard of Sober September. Like Dry January, people try to go alcohol-free for a month to reset their drinking patterns. Unlike Dry January, however, its origins are a little more mysterious. While history tells us that abstaining from alcohol in the post-yuletide period is a very old concept — a teetotal version of "new year, new you" — the idea of not drinking for a month in the fall is relatively new.

"People have been reaching out to me consistently about reevaluating their alcohol intake," Ruby Warrington, author of Sober Curious and founder of non-drinking club Club SÖDA NYC, tells Bustle. More millennials are identifying as "sober curious," or keen to investigate the benefits of not drinking — whether that's for a month, or over the longer term, and Dry January and Sober September provide great opportunities to experiment.

Taking even a short pause on drinking is pretty good for you. According to 2018 research from the University of Sussex that studied people who went sober for the first month of the year, Dry January helped people feel a sense of achievement, save money, sleep well, and have more energy, improved concentration, and better skin. What's more, those who went back to drinking once the month was over continued to drink less over the next six months. The same team also studied Dry January in 2019, and found that people felt more prepared to deal with difficult issues in their lives after they'd participated. A 2016 study of Dry January published in Health Psychology also discovered that participants were more capable of refusing drinks at social events after their alcohol-free month.

More millennials are identifying as "sober curious," or keen to investigate the benefits of not drinking.

People wanting to go sober in September this year may find it's less popular due to the pandemic. The stress of 2020 have led to a spike in drinking; data released in July by Nielsen showed that in-store alcohol sales had increased by 54% and online alcohol purchases by 500% compared to 2019. If you feel like your quarantine drinking habits have gotten out of hand, though, Sober September may offer a reset button.

The idea of Sober September may have emerged in England with the charity Cancer Research UK, which was credited with creating it in 2016 and now hosts "dryathlons" year-round to raise money for cancer research. In the U.S., Yahoo Health suggested in 2018, it may have gotten a boost because it coincides with the start of the new school year. "September has a back-to-school feel, and after a boozy summer it's a month that finds a lot of people in detox mode," Warrington tells Bustle. "People also see September and October ('sober October' is also popular, in the UK in particular) as a good time to take a break from drinking before Halloween and the holidays kick in."

If one month without booze seems difficult, particularly in a pandemic, go slow. "Even if you don’t go completely sober, a reduction in drinking is still a worthy goal as it not only improves your sleep but can improve your overall health and wellbeing," Dr. Joseph Volpicelli M.D., a psychiatrist and sobriety expert, tells Bustle. "Sometimes a goal of lessening up alcohol consumption can be a great lifestyle transition for a month."

Sober September may be just the beginning.The Atlantic reported in 2019 that alcohol-free cocktails had become easier to find as millennials — and, as they come of age, Generation Z — become less enthused about drinking in general. Sobriety may be tougher now that we're all hosting cocktail parties on Zoom, but if you're thinking about going sober before Halloween, you definitely aren't alone.

This article was originally published on Aug. 20, 2019