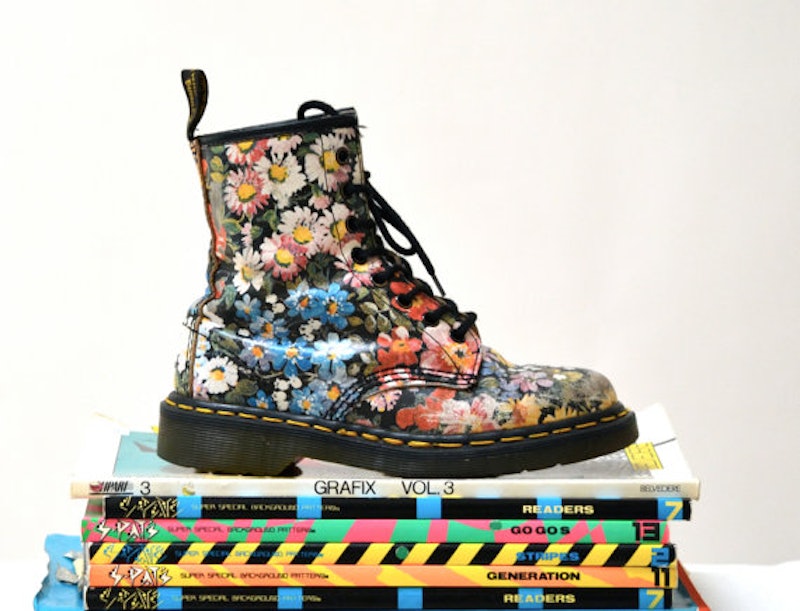 The 1990s was a wonderful time filled with a plethora of boy bands and pop princesses who we obsessed over, the exciting, early days of the internet, and iconic fashions that summed up the decade. The fashionable footwear of the '90s will probably be studied in centuries to come and people will furrow their brows, tilt their heads, and attempt to unravel the reasons why we used to wear these shoes on a daily basis. Much like certain contemporary reactions to traditional corsets from years gone by.

There were so many kooky fashions during the '90s that it's difficult to keep track of all of them. Some of the most popular styles we loved to flaunt included crop tops, low-rise jeans, tattoo choker necklaces, inflatable backpacks, and bandana tops, to name a few. These pieces were staples in the wardrobes of '90s cool girls.

Then there were the shoes. If you wanted to be considered "rad" in the 1990s, there were specific shoes you likely had to have. If you didn't own at least one pair of stylish kicks, you had to make peace with yourself that you weren't going to be the next Cher Horowitz. The '90s was a cut-throat decade of very niche trends, and if you didn't follow the fashions, you apparently weren't worth hanging out with. Unless a popular rich kid gave you a "makeover." Harsh, huh?

Whether you owned them or daydreamed about them, chances are you were obsessed with these '90s shoes.

Growing up, you might have had a pair of Dr. Martens, especially if you tended to shy away from the "mainstream" and saw yourself as more of an alternative kid. Being into Dr. Martens was an expensive hobby, because every time a unique, new style was offered up, we lusted after them. We wanted a pair in every color, and it's likely most of us still do.

Another type of '90s footwear that seems to be having a contemporary reboot is the humble Birkenstock. At first, I remember being a little confused as to why everyone wanted to look like a math teacher on a field trip. But once I realized that they were actually insanely comfy and could be worn for a variety of occasions, I lusted after these sandals, too. Nowadays, all the cool kids have Birkenstocks.

These were the shoes we all begged our moms for, but never got. If you were lucky (or whiney) enough to bag yourself a pair of L.A. Gear light-up sneakers, you probably had never-ending fun playing with your new toy/footwear hybrid.

Britney Spears + Skechers = an unstoppable force to be reckoned with. Whatever she was advertising, we wanted. Although Spears was signed to Skechers in 2000, we'd already been subjected to the brand's pop culture references in movies such as 1999's 10 Things I Hate About You , for instance. So by the time Spears was advertising Skechers, we were completely devoted to the brand.

Platforms were all the rage in the '90s because they represented girl power. As seen on practically every member of the Spice Girls — except Sporty Spice, perhaps — we loved the style. Unfortunately, our moms would inwardly cringe every time we wore them, worried that we would fall and break every bone in our bodies.

Although the '90s clog was undoubtedly precious, chances were you felt like you had bricks strapped to your feet after 30 minutes of wear. There was no running around in clogs: You usually had to kick them off and go barefoot or change into something more sensible, like your Birkenstocks.

If you were a teen in the '90s and going through your angsty phase, you probably needed a pair of black goth boots that matched the color of your soul. When it came to goth boots, the more buckles, the better. Additionally, they could only be classed as proper goth boots if they were rocking a big-ass platform. The decade was all about the revival of the 1970s platform, after all.

When you had an adorable pair of jelly shoes strapped to your feet, you felt invincible. You could run, splash, swim, adventure — the world was your oyster. It's no wonder that these lovable Care Bears of the footwear world came back in vogue a couple of years ago.

John Fluevog Shoes rocketed onto the fashion scene in the '90s, arguably thanks to Lady Miss Kier and Madonna. If you were a devoted follower of trends, you needed a pair of space-age, Marie Antoinette style Fluevogs in your life to show the world that you had your finger on the sartorial pulse.

When it snowed in the 1990s, there was no other type of footwear that could be worn apart from Moon Boots. Not only were they fairly functional, but they also went so well with your crazily patterned graphic snow suit.

If you wanted to fit in with the popular crowd at school, you needed a pair of Steve Madden sandals, in particular the single strap black kind that showed off your perfect pedicure. You felt so grown-up in these shoes and you believed that you looked at least 16. In reality, everyone thought it was so precious how you were trying to look mature while wearing your stick-on earrings and inflatable backpack.

Do you have any of these 1990s shoes hidden in the back of your closet? You could likely make some extra money by selling them online to nostalgic Millennials. Or go for it and rock a head to toe '90s look if you can't bear to part with them!