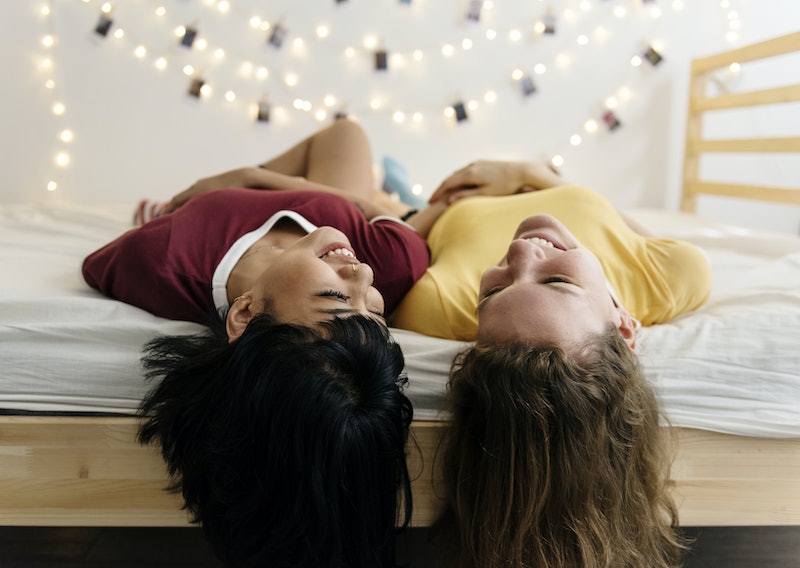 When it comes to feminism, it's important to keep in mind that we all have our own definitions and perspectives about what it's all about. At its core, though, feminism is about equality — for everyone, no matter what your identity or intersection of identities might be. It's interesting, therefore, to think about what college traditions are rooted in feminism; right away when I think about college and feminism, I think about things like the awesome women's colleges that still exist today, the way barriers have been broken down for people who were once denied education based on anything from their gender to their skin tone, and more. In many ways, we're still struggling for basic equality and recognition despite all the decades (and, indeed, centuries) that have passed; still, though, we've come a long way, too. And that, as they say, isn't nothing.

When it comes to college, things are not all golden for... basically anyone who isn't a cisgender white man. Sexual assault is essentially an epidemic on college campuses, where it disproportionately affects women and gender non-conforming people; slut-shaming and victim-blaming can seem like they're built into the environment; somehow some people still think it's acceptable to attend college parties in blackface; and on, and on, and on. But intersectional feminists are fighting for and with each other through protest and raising awareness of these issues in an effort to bring about the changes we need in policies and behavior.

And indeed, some longstanding traditions are actually more feminist than you might think. Let's take a look at a few of them:

Sororities definitely face some hard stereotypes: Too often, people still regard them as superficial cliques that only care about parties and dating. But the stereotype that sorority girls are inherently ditzy, dumb, or not in college for the "right reasons" is harmful because it hinges on negative biases against women. In fact, joining a sorority can totally be a feminist move: You're supporting and respecting your fellow sisters and you're upholding community beliefs and ethics to boot.

For many of us, living in a dorm is the first time we live with people outside of our own families. But although it might be a little difficult to get used to sharing a limited living space — especially if you've been fortunate enough not to have to share a room with anyone before — dorm living gives you the opportunity to bond with other women (or gender non-conforming students, depending on your school's policies) and grow and nurture one another not only in the classroom, but in your life outside of class, too. Dorm living is also a time when many of us are first getting our feet wet in terms of independence and adulthood, so supporting one another through the trials and tribulations can absolutely have a feminist bent.

Of course women aren't the only people in the world who do internships, but pursing an internship can definitely serve a feminist agenda if that's how you roll. Even today, pretty much everyone besides cisgender white men still face discrimination and harassment in the workplace; indeed, even breaking into a male-dominated field can feel almost impossible. But when women participate in internships in male-dominated fields, it provides them with access to the industry and the opportunity to bring diversity and fresh perspectives. Even if you intern in female-dominated industries, internships develop your skills, personal knowledge, and employment prospects. What's more feminist than helping women and minorities get ahead in the workforce?

4. Participating In A Rally Or Protest

No matter what the issue is, participating in a rally or protest is definitely a feminist move. In college, there are lots of feminist marches and protests to participate in, especially around the topic of sexual assault and sexual violence against women. For so long, women weren't able to use their voices to express themselves, their concerns, and their needs, either as individuals or as a group. Participating in a march or protest lets people know that you have a message that merits attention and that you and your cause demand to be taken seriously.

OK, so this one is less traditional and more breaking tradition; for a long, long time (and, unfortunately, still frequently today), women weren't encouraged to pursue math, science, or technology. However, women mathematicians and programmers have been working behind the scenes for centuries (remember Ada Lovelace, the first computer programmer?), so in many ways, when women pursue STEM fields, they're going back to their feminist roots and all the groundbreakers who came before then. In the end, no matter what major you choose, pursuing an education, period, is an act of feminism.

More like this
How To Fight For Reproductive Rights, Based On How Much Time You Have
By Courtney Young
Sandra Bullock, Girlboss Extraordinaire
By Matt Harkins & Viviana Olen
Yomi Adegoke On The Offline Diaries & The Power Of Representation
By Jessica Morgan
The Music Industry Continues To Fail Black Women
By Precious Adesina
Get Even More From Bustle — Sign Up For The Newsletter