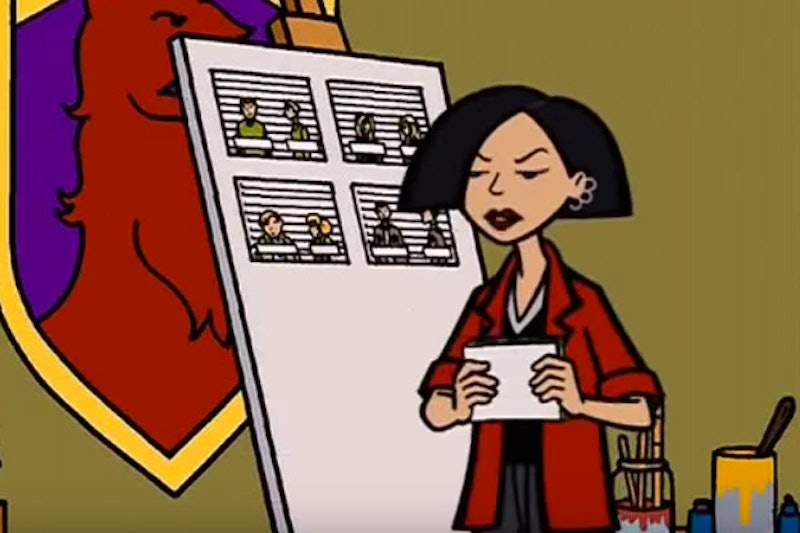 There's no escaping the fact that fashion is cyclical and, consequently, that we've been trapped in a 1990s style bubble for quite some time now. What with all the crop tops and brown lipliner, it was only a matter of time before we noticed popular '90s piercings that are cool again.

Your age in the '90s will likely dictate what piercings you had or lusted after. There's obviously a huge difference between the types of piercings a 16-year-old and a 6-year-old would want. If you were a kid during the ‘90s, you likely idolized child movie stars of the period like Lindsay Lohan and Mary-Kate and Ashley Olsen. Thus, you'd beg your parents to let you get any piercings they were rocking.

However, folks who were teens in the 1990s would have had a whole different set of style icons, repping an array of way “edgier” piercings, like tongue ones and cartilage studs. It’s safe to say that folks of all ages idolized the Spice Girls, though, who were known for pushing the boundaries with their style choices, including wearing trendy piercings that epitomized the time period.

So let's take a stroll down memory lane together and look back at the most popular piercings of the '90s, along with who's rocking them and making each cool again now.

If you weren't allowed to get your ears pierced in the 1990s, you likely tried to do your own with the help of your bestie, just like that scene from The Parent Trap . However, my guess would be you were too chicken to actually go through with it.

In early 2016, Kylie Jenner attended the Golden Globe Awards Post-Party. On her right ear, she wore a plethora of piercings, but she kept her left lobe classic with a solo stud.

Angsty teens of the '90s who were into the grunge scene likely adored bad gal Nancy of The Craft's style, including her rebellious nose ring.

At Coachella 2014, Kendall Jenner wore a huge nose ring and brought back this trend in a big way. Who cares if it was faux? It still looked cool AF. Miley Cyrus' collection of piercings also included a nose ring and Kesha rocked one for what feels like forever.

This image makes me want to travel back in time to the late '90s, when there were four members of Destiny's Child and Beyoncé's diamanté bellybutton shone like a thousand suns.

With late '90s and the early '00s trends on the fashion horizon in 2016, the bellybutton piercing looks to be on the rise. It's so great to see all sorts of folks flaunting their pierced navels, like plus size beauty and fellow Bustle writer Courtney Mina. After all, navel jewels are made to be adorned by any body.

New model Stella Tennant wore a septum piercing on the runway at the beginning of her career in the early '90s. It gave her a super rebellious edge, because it made a nod back to the punk movement of the '80s when piercings were everywhere. The fact that Tennant was born to Scottish nobility likely made her look like even more of a rebel.

From Kat Graham, to Ellie Goulding, and even Madonna, so many celebrities are rocking septum piercings. Fake or real, it makes no difference — they all look stunning IMO.

Sure, she's a cartoon, but chances are that if you watched Daria in the '90s, you probably thought her BFF Jane Lane was one cool cat. Jane wore multiple cartilage piercings and she may have inspired you to brave a solo cartilage one at the top of your ear, much to the disappointment of your grandmother.

Although simple stud or hoop earrings were popular choices to wear in your cartilage in the '90s, nowadays it's all about experimentation and industrial piercings. This style seen here on Willow Smith is becoming super popular.

Sporty Spice had us all begging our parents to get a nose stud in the '90s. If your folks were chill and you were old enough, they might just have let you.

Katy Perry's been spotted wearing a subtle yet stylish nose stud, making this piercing trend feel more grownup than it was in the '90s.

Back in the 1990s, nipple piercings were more common among men, like Mötley Crüe member Tommy Lee.

Nowadays, things are (thankfully) a little different. Speaking with Page Six in Sept. 2015, Kendall Jenner confessed that she had a nipple piercing. Jenner told the publication, "I was going through a period in my life, having a rough time, being a rebel and was like, ‘Let’s just do it.’"

It seems the nipple piercing might be an eternal symbol of the good girl gone "bad," but I'm just pleased to see more ladies flaunting nipple embellishments, because #freethenipple.

Mel B got her tongue pierced in the '90s and sent adolescent girls worldwide into a frenzy. However, your mom probably didn't let you get one, even if you were nearing adulthood.

Early this year, J. Colby Smith, piercing expert at New York Adorned, spoke with Glamour about the hottest body piercing trends. Glamour reported, "Smith recalls a model client who had to talk him into piercing her tongue."

According to Smith, "She just wanted this little gold thing, and it didn't look obnoxious or trashy. It looked adorable and sweet and worked with her job." It seems that subtle, delicate, and elegant tongue jewelry is the way to go if you want to add a contemporary twist to this '90s trend.

In the 1990s, eyebrow piercings seemed most popular amongst male heartthrobs in boybands. However, there were a few edgy gals who were way ahead of their time, like Lisa "Left Eye" Lopes of TLC .

After a resurgence of eyebrow piercings in the fashion world — aka the multiple faux piercings that models wore across their brows at Rodarte's spring RTW 2015 show — pierced eyebrows have come back into vogue. Kirstin Maldonado of Pentatonix looks seriously cool sporting her eyebrow piercing in this recent Instagram selfie.

So, one important question remains: Which '90s piercing will you go for?