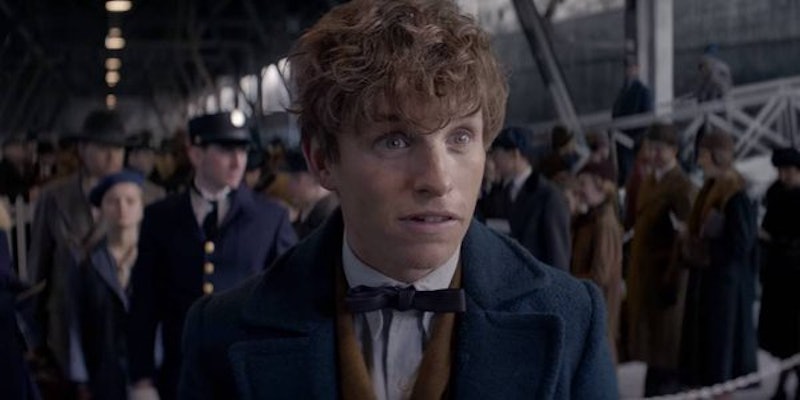 Warning: This post contains spoilers for Fantastic Beasts and Where to Find Them.

Newt Scamander is a rare bird — rarer even, perhaps, than the Thunderbird he recklessly smuggles into Manhattan in Fantastic Beasts and Where to Find Them. Newt tears up in wonder as a baby Occamy hatches, and tenderly refers to himself as "Mum" to a group of them. When Newt's privacy is violated by Queenie's Legilimency, his reaction, though he is feeling "angry and embarrassed," according to the screenplay, is merely to say, "Please don't read my mind," and then, "Sorry, I asked you not to." When Newt's beasts — the very nearest and dearest creatures to his heart, and the purpose of his entire life's work — are threatened, he doesn't try to lash out or fight or punish anybody. His pleas for MACUSA to see reason are entirely an appeal to their emotions, an attempt to reason not just with their heads, but their hearts: "No, no, don't hurt those creatures — please, you don't understand — nothing in there is dangerous, nothing!"

Newt Scamander takes every trope we know about the Male Hero — the toxic tropes that we have grown up with, that are so internalized in traditional narratives that we don't even blink at them anymore — and flips them on their head.

In an ordinary narrative (traditional Harry Potter narratives included) the idea of a Male Hero manifests very differently. See, if Newt were the hero we were used to, he would still defend those creatures, but out of some profound, Gryffindor-like sense of indignation and rage, which he'd use to justify whatever extreme means he'd employ to protect them. If he were the hero we were used to, he would have lashed out at Queenie, and we would have accepted it. Men's pain is traditionally considered weakness, and her exposure of his would open up a plot point for him to expose his manly fury. And the "manlier" thing to do when Newt's beasts were compromised was, no doubt, to hurt anyone and everyone he could.

And you know why the fandom wouldn't have blinked? Because we already had a hero who was subject to the harmful standards of toxic masculinity, and his name was Harry James Potter. He balked at the idea of women crying. He funneled his emotions by essentially speaking in capslock for the majority of his fifth year at Hogwarts. He was frequently the last to clue in on the poignance of an emotional situation, and one of his biggest, very Slytherin-esque fears was that he might be too weak to save the people he loves. We know how harmful this was to Harry in particular because we took that journey with him, and watched how those standards derailed him. We also know how harmful these standards are to men and women at large, because of all the research that has gone into proving the negative emotional consequences of toxic masculinity. It was very clear through Harry's arc that J.K. Rowling was making a statement about just how it affected him over time, and in some ways, the psychological ramifications we see in the older Harry in Cursed Child is a continued response to it.

By virtue of this, it is no coincidence that Hufflepuffs are the house the most often made fun of. The world was introduced to the idea of Hufflepuffs in the '90s, a time when toxic masculinity reigned supreme — when mainstream entertainment favored brooding, angry heroes who were bossy and insulting, and it was up to the women in their lives to see them for all the ~good~ underneath (looking at you, every '90s rom-com ever). To have a house that was outright known for being sensitive and good edged us out of that comfort zone of what we thought "sexy" and "heroic" was. In order to sell the fandom on Cedric Diggory, the one case we had of a male Hufflepuff hero, the series still had to demonstrate a toughness and a swagger that was not necessarily aligned with the Hufflepuff.

So how exactly do we prime an audience to love a sensitive hero,when they have grown up on a steady diet of True Men Keep Their Emotions On The Inside (Except When They're Super Duper Mad)? In this particular case, there were two answers: extremely careful writing by J.K. Rowling, and the casting of Eddie Redmayne.

We've seen Rowling grapple with the harmfulness of toxic masculinity before, so it is not necessarily a surprise that she could pull off the response to it: a character who, despite the repressive world around him and living in the shadow of a Typical Male Hero war veteran as an older brother, manages to stay true to his own nature. But rarely can an actor do justice to this kind of hero without making it seem forced — which is what is so remarkable about Redmayne as an actor, and the roles he chooses. Redmayne first hit the mainstream as Marius in Les Miserables, the boy revolutionary who falls in love while every man around him is taking up arms for revolution. He went on to win an Oscar for his nuanced portrayal of Stephen Hawking in The Theory of Everything. The next year, he scored another Oscar nomination for portraying Lili Elbe in The Danish Girl , a movie which not only took down toxic masculinity tropes, but also demonstrated the true tragedy of them. Redmayne as an actor seems to be drawn to these types of roles, and for good reason — it seems to be very true to his own nature, and he is damn good at it.

Also essential in Fantastic Beasts's changing this narrative of men being weak for showing their emotions are the reactions of the people around Newt in the film. The supporting cast of characters, both men and women — Tina, Queenie, and Jacob Kowalski, specifically — are all at some point or another surprised by his sensitivity, but foster a safe environment for it. The people who react poorly to it are clearly the "bad guys," and through this, the movie retrains its audience to see this hero through a different lens.

Topping this all off is Redmayne's recent PSA for Hufflepuffs, a (hilarious) plea to see the house in a different light, as well as recent claims by J.K. Rowling in 2015 that we were beginning an Age of Hufflepuffs. But this is so much larger than getting justice for the fictional organization that is the Hufflepuff House. The idea of bringing the traits that represent Hufflepuffs to the forefront is speaking to a pervasive culture that has for so long favored dynamics whereby the strongest are the most celebrated, even when that strength comes from toxic places — which is ultimately harmful to both men and women. By putting a Hufflepuff hero in the spotlight and demonstrating the power of kindness, loyalty, and compassion, the arc of Newt Scamander challenges all of those ingrained notions, giving both male and female heroes room to breathe. The further we let ourselves stray from the brooding, toxic heroes, the more space there is to also have emotionally charged female heroes whose sensitivity isn't a "weakness."

The box office success of this film is not just a testament to the loyalty the Harry Potter fandom, but also to how ready the world is to embrace new archetypes for heroism — heroes who are honest, vulnerable, and unafraid to feel. We know we've got four more Fantastic Beasts film with a sensitive hero left. Hopefully, his success will pave the way for many more to come.

More like this
Netflix Shut Down 'Bridgerton' S3 Rumours About A “Very Dark” Storyline
By Bustle
Kukulkan From 'Wakanda Forever' Has A Surprising Connection To Marvel History
By Grace Wehniainen
Michaela Coel Has Some *Thoughts* About The Nepo Baby Discourse
By Maxine Harrison
Rupert Grint Just Shared A *Major* Update About Ron Weasley’s Future
By El Hunt
Get Even More From Bustle — Sign Up For The Newsletter
From hair trends to relationship advice, our daily newsletter has everything you need to sound like a person who’s on TikTok, even if you aren’t.