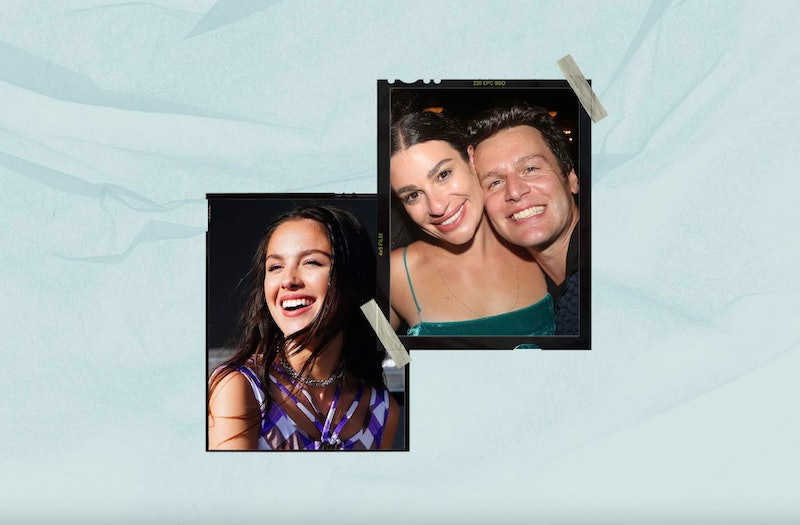 Glee star Lea Michele took over the role of Fanny Brice in Funny Girl on Broadway in September, receiving seven standing ovations on her opening night. Since replacing Beanie Feldstein, the 36-year-old entertainer has seen an outpouring of celebrity support, most recently from three-time Grammy winner Olivia Rodrigo, who described Michele’s performance as “INCREDIBLE!!!!”

The Funny Girl casting shakeup, of course, has also come with its fair share of critics, including some of her former Glee co-stars. Chris Colfer, who played Kurt Hummel alongside Michele’s Rachel Berry on Glee, shaded Michele when asked whether he would go support her on Broadway: “No, I could be triggered at home.” Other celebs who have come out against Michele’s casting include Samantha Ware, Amber Riley, and Yvette Nicole Brown.

Here’s a list of celebrities who have stopped by August Wilson Theatre to support Michele.

The “good 4 u” singer visited Michele backstage at her Oct. 12 show. Rodrigo enjoyed the show, commenting on Michele’s Instagram photo, “LOVE U! U WERE INCREDIBLE!!!!”

Though Rodrigo gives Glee a shoutout in her hit song “deja vu,” she later confessed on Instagram Live that she had never actually seen the show when she wrote the lyric. “I think it's so funny, some of the specifics in ‘deja vu’ are like, not entirely reality at all. And like, Dan [Nigro] and I wrote that line, ‘Watching reruns of Glee,’ and neither of us had ever watched an episode of Glee when we wrote that,” she told her followers when her album came out in 2021.

A former Glee castmate of Michele’s, Darren Criss and his wife Mia attended the show on Oct. 5. The duo have remained close friends since the show ended, even going on tour together in 2018, covering the hit song “Shallow” from A Star Is Born.

As Michele’s best friend and former Glee castmate in the Tony-winning production of Spring Awakening, it’s no surprise that Jonathan Groff was among the celebs at opening night. He reportedly led the seven standing ovations and was seen crying during the performance.

Jamie Lee Curtis, who starred with Michele on the campy drama Scream Queens, made her way to the Sept. 21 performance of Funny Girl. In October, Michele and Groff appeared on Curtis’s podcast “Good Friend,” and Curtis playfully chided Michele for not having won a Tony yet. Groff burst into laughter and it seems like Michele took the joke in stride.

Michele became a household name after Glee, and she can thank Ryan Murphy for that. The TV mogul who is responsible for shows like Nip/Tuck, American Horror Story, and the recent Netflix juggernaut Dahmer – Monster: The Jeffrey Dahmer Story gave Michele her first chance to play Fanny Brice via performances on Glee.

In a segment on her eponymous talk show, Barrymore revealed she was also in attendance on opening night. Barrymore said she was “crying really hard” at the end of the performance and even shared some tears with Michele’s father, who was overcome with emotion during the show.

Fashion designer Michael Kors is among the recognizable faces who have stopped by the show. In October, Michele repaid the favor by wearing one of his designs in an appearance on The Tonight Show with Jimmy Fallon.

Also featured in a roundup posted on the Funny Girl Instagram page is Modern Family star Jesse Tyler Ferguson. The Broadway stalwart, who is currently starring in Take Me Out, popped over to the August Wilson Theatre with his husband Justin Mikita to see Michele in the show.

More like this
Hailee Kaleem Wright's Topsy-Turvy Path From MTV To Broadway
By Samantha Leach
Bonnie Milligan's Wellness Routine, From Daily Journaling To Drugstore Teas
By Jessica Derschowitz
What Really Happened Between Lea Michele & Sadie Sink On 'The Tonight Show'
By El Hunt
Riley Keough Joins Celebs Paying Tribute To Late Mom Lisa Marie Presley
By Radhika Menon
Get Even More From Bustle — Sign Up For The Newsletter
From hair trends to relationship advice, our daily newsletter has everything you need to sound like a person who’s on TikTok, even if you aren’t.