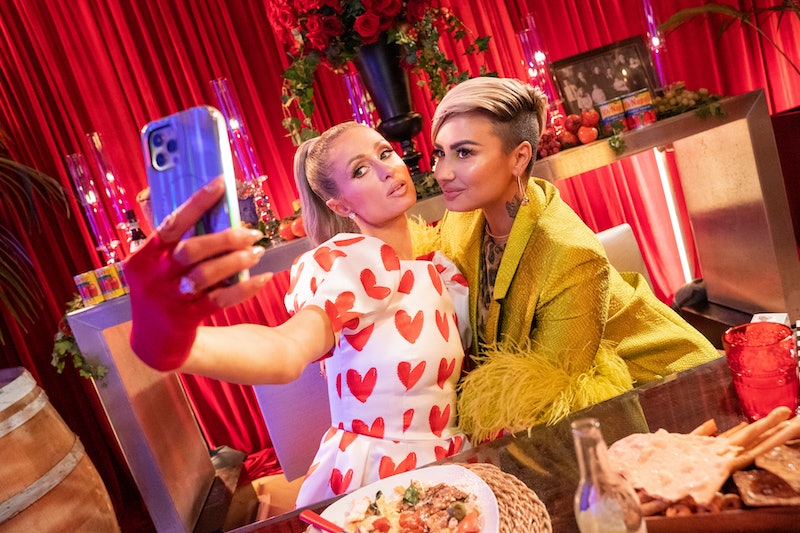 Given the generation gap between them and their seemingly different career paths, Demi Lovato and Paris Hilton aren’t the likeliest of friends. But the pair has more in common than most people think. Lovato has more chart-topping hits and a bigger acting resume, but they’re both musicians and actors in their own right (never forget Hilton’s turn in House of Wax). They also both have YouTube documentaries that drop bombshells about their traumas, and they’ve gone through extreme tabloid scrutiny — even if Hilton takes the crown of paparazzi queen. Given these shared experiences, their bond makes a lot more sense, especially when you look at the fun, hilarious, and often supportive moments that make up Hilton and Lovato’s friendship timeline.

While it’s not known exactly when they met, Hilton said on her new show Paris In Love that she met Lovato at Ellen DeGeneres’ birthday party and they instantly clicked. On the final episode of that show, which aired Jan. 27, 2022, Lovato is shown at Hilton’s November 2021 wedding singing Whitney Houston’s “I Will Always Love You,” another indicator of their strong friendship.

Lovato has said they’ve known Hilton since they were just 15 years old, when Lovato was still best known for Disney Channel work like Camp Rock and Sonny With a Chance. While the duo isn’t seen out together 24/7, like Hilton was with her former assistant Kim Kardashian and Simple Life co-star Nicole Richie in the early 2000s, Hilton and Lovato have worked hard and played hard together more than you think. Perhaps a Lovato remix of “Stars Are Blind” will be their next collaboration? One can dream.

The video for Lovato’s 2017 hit single “Sorry Not Sorry” featured unexpected appearances from a bevy of A-listers, including Wiz Khalifa and Jamie Foxx. But the true star of the show was Hilton, who served as DJ of Lovato’s neon-lit pool party, because who else would you want to provide the soundtrack to your bash? The duo had a ton of fun on set, but the shoot didn’t go without some hiccups.

Hilariously, Hilton came to the video shoot more prepared than Lovato did. “Paris Hilton did bring, I think it was 11 or 12 suitcases full of clothes, just to make a cameo in my music video,” Lovato told Harper’s Bazaar in April 2020. “And I didn’t even bring that many clothes to pick. I think there was one point in the night where I was like, ‘How is your outfit more glamourous than mine?’ It was just dope.” The singer also told a fan on Twitter that Hilton’s hair got stuck in a portable fan while filming, which really just may be the sign of a great party.

Hilton attended the premiere of Lovato’s 2017 documentary Simply Complicated and supported her friend on the red carpet. “I love her, I’m so proud of her,” she told reporters. (These comments were made years before Lovato started identifying as nonbinary and using they/them pronouns.) Hilton also reflected on her experience filming “Sorry Not Sorry” music video. “We’ve had so many fun times together,” she said. “It was a lot of fun being on set with her and Wiz Khalifa.”

On July 24, 2018, Lovato was hospitalized after they were found unconscious at home following a drug overdose. In the days to come, as they became stable and alert, stars from all walks of life reached out both publicly and privately to Lovato, including longtime friend Hilton.

Just days after the overdose, Hilton expressed her love for Lovato when confronted by a paparazzo at LAX. “I love her so much forever and ever,” Hilton said. “She’s such a beautiful, strong woman, so I’m sending her my best wishes. She’s so lovely and so talented, just beautiful inside and out.” On Aug. 5, 2018, Hilton also took to social media to send Lovato her support. “Love you so much sis @ddlovato,” the heiress wrote on Twitter, complete with a simple heart emoji.

When it comes to Halloween, these two can always count on each other to deliver looks (well, expect for 2020, when COVID-19 ruined everything). On Oct. 25, 2019, Lovato went to Hilton’s annual Halloween party as Marie Antoinette, with the most opulent blond wig and ruffled corset. Hilton returned the favor the next day when Lovato hosted their own Halloween party. As seen in a now-deleted Instagram post, the reality TV star attended as a sexy schoolgirl, while the host dressed as Pennywise, the horrifying clown from It.

Just months after Hilton released her revealing YouTube documentary This Is Paris, Lovato followed by teasing their own YouTube docuseries, Demi Lovato: Dancing With the Devil, which sees them open up for the first time about the tragic events that led up to their 2018 overdose and its devastating aftermath. After the singer shared the moving trailer on Instagram on Feb. 18, Hilton responded with love in the comments section, writing a bunch of heart emojis in support of Lovato speaking their truth, just as Hilton did in her own doc.

Lovato and Hilton may be great friends, but as proven on the TV star’s Netflix show Cooking with Paris, they’re not always the best cooks. Hilton brought on Lovato to make cannoli, but they both forgot one key step with the filling. “I was supposed to keep this in the refrigerator,” Hilton said. “We’ve had it out the whole time. So it’s all melted. Great.” They ended up covering their mess with tons of glitter and sprinkles, because when in doubt, add more glitter.

Not only was Lovato invited to Hilton’s wedding to Carter Reum in November 2021, but the artist was also asked to sing at the reception, and boy did they sing. Lovato performed a cover of Whitney Houston’s “I Will Always Love You” for the newlyweds and 250 wedding guests, including Nicole Richie, Kim Kardashian, Paula Abdul, and Hilton’s famous family, who were all on their feet for Lovato’s spectacular vocal runs. Lovato’s emotional number was filmed for the January 2022 finale of Hilton’s Peacock series Paris In Love.

Prior to the wedding, Paris In Love also included scenes of the duo hanging out at Hilton’s home and going shopping at Dolls Kill to pick out looks for Hilton’s neon carnival (her post-reception afterparty). While at the store, Hilton thanked Lovato for giving her the motivation to speak out about her allegedly abusive experiences as a teenager at Provo Canyon School in her YouTube documentary This Is Paris, saying she was inspired by Lovato’s honesty and candidness about their struggles in their first YouTube documentary Simply Complicated.

More like this
Brittany Snow Files For Divorce From Tyler Stanaland After 'Selling The OC' Drama
By Grace Wehniainen and Radhika Menon
Andy Cohen Apologized To Larsa Pippen After A 'RHOM' Season 5 Reunion Dust-Up
By Brad Witter
'Bling Empire: New York’ Star Tina Leung Has A Superhero Alter-Ego
By Alyssa Lapid
'Bling Empire: New York’ Star Dorothy Wang Wants To Try 'The Simple Life'
By Alyssa Lapid
Get Even More From Bustle — Sign Up For The Newsletter
From hair trends to relationship advice, our daily newsletter has everything you need to sound like a person who’s on TikTok, even if you aren’t.