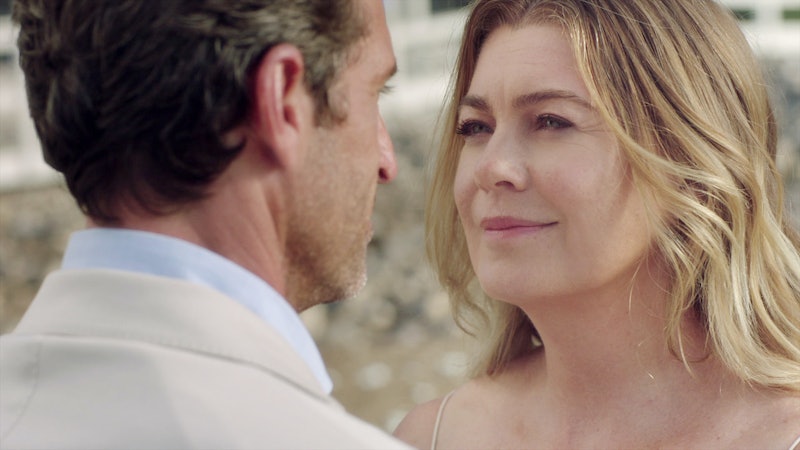 In 2020, Grey’s Anatomy tackled the pandemic more directly than perhaps any other show. Premiering in November, its 17th season depicted the mental and emotional toll coronavirus took on the doctors at Grey Sloan Memorial (and hospitals as a whole), with Meredith Grey herself even contracting the virus and becoming unconscious for a majority of the season. Even so, Ellen Pompeo’s titular character continued to get plenty of airtime, as Meredith remained on a dream-like beach where she was visited by several ghosts of Grey’s past.

“We had to work around COVID obviously and so we had to be creative and think of ways to keep the show going and still be safe,” Pompeo told Entertainment Tonight on Sept. 19. “The coma was one and then the beach and the dream sequences was another and of course, bringing back people who had passed on to the other side. I think it just resonates with people right? Everyone wants to have one last conversation with someone they've lost.”

There was also plenty of classic Grey’s drama and romance, with the June 3 finale ending on a largely positive note that included a wedding, an adoption, two proposals, and Meredith’s triumphant return to the O.R. Here’s everything else to remember before Grey’s Anatomy Season 18 premieres on Sept. 30.

Meredith Had A Long COVID Battle

After the mystery illness that caused Meredith to collapse in the Grey Sloan parking lot was revealed to be COVID, the famed surgeon’s fate hung in the balance throughout the season, with many fans coming to believe that she would die. Following a false recovery and relapse, Meredith was put on a ventilator in the winter finale, then unsuccessfully taken off and put back on said ventilator, before Teddy Altman (Kim Raver) ultimately removed the device for good. Even after she seemed out of the woods, however, Meredith remained unconscious, much to the puzzlement of her colleagues.

In the end, it was her daughter Zola’s voice that helped Meredith wake up. She continued to struggle with long-term effects from COVID, but by season’s end, she’d returned to Grey Sloan as the head of the intern program and, later, successfully performed a double lung transplant.

After Meredith passed out in the Season 17 premiere, Patrick Dempsey’s Dr. Derek Shepherd was the first of several major surprise characters to show up on an imaginary beach somewhere deep in Meredith’s subconscious. Derek appeared three additional times throughout the season. In one episode, he revealed that he’d been watching over his wife and kids, giving Meredith a sense of closure while also providing longtime viewers with a needed dose of nostalgia. In one of Derek’s final Season 17 scenes, he and Meredith even finally had their beach wedding.

Elsewhere, Derek also seemingly gave Meredith his blessing to move on romantically, perhaps with Cormac Hayes (Richard Flood). Meredith’s possible new love interest “McWidow,” who Cristina sent her) also appeared on the beach and begged her to fight for her life. Hayes revealed he’d been facilitating video chats between Ellis, Bailey, and Zola with their mom. The pediatrics doctor even repeated a comment Derek had made earlier about Ellis looking like Meredith.

Derek’s comeback was followed by that of T.R. Knight's George O'Malley, who died in a Season 6 bus accident. After reminiscing about their interning days, George revealed that he, too, checks in on Meredith’s kids. In the episode’s poignant final scene, Richard Webber (James Pickens Jr.) and Miranda Bailey (Chandra Wilson) — the only other two remaining original cast members — joined Meredith and George on the beach.

Several months later, Mark Sloan (Eric Dane) and Lexie Grey (Chyler Leigh) returned to the show, revealing that they’re still together in the afterlife following the Season 8 plane crash that killed them. With the wisdom of hindsight, Lexie and Mark counseled Meredith that fighting change and resisting pain is “such a waste of life.” After Meredith said she’d missed them both “so much,” Lexie informed her that they “never left” her.

Though still technically living at the time, Andrew DeLuca (Giacomo Gianniotti) also visited Meredith’s beach, though he soon died from stab wound injuries he’d sustained while pursuing child trafficker Opal. “If I go back and you don’t, I’ll miss you,” Meredith told her recent ex. After promising her she’d be OK, DeLuca took off down the beach and reunited with his late mother. Police arrested both Opal and the unidentified man who stabbed DeLuca, but the tragedy still hung heavily over the Grey Sloan staff.

After witnessing racial inequality in medicine during the pandemic, a conflicted Jackson visited his estranged father Robert Avery (Eric Roberts) in Montana for some deep soul searching. Once back in Seattle, Jackson announced that he’d decided to move to Boston, where he could use a position in his family’s foundation to help battle systemic racism. (Greg Germann’s Tom Koracick asked Jackson to give him a job in Boston, also exiting the series.) But first, Jackson had to convince his ex April Kepner (Sarah Drew, in another Season 17 Grey’s alum return) to move cross-country with him and bring their daughter Harriett. Following some debate, April agreed. The two left it open-ended whether they’d get back together, but they both had their “fingers crossed for new horizons.”

Maggie & Winston Had A Whirlwind Romance

After former colleagues Maggie Pierce (Kelly McCreary) and Winston Ndugu (Anthony Hill) reconnected at the end of last season, their romance rapidly progressed from virtual, long-distance dating to an engagement within just a few months. Winston relocated from Boston to Seattle (with a horrific police encounter along the way), and the pair got married in the Season 17 finale.

Despite the episode making clear that he and Amelia Shepherd (Caterina Scorsone) were not on the same page about marriage and having more babies, Link enlisted the help of Zola, Bailey, and Ellis and proposed on the beach after Winston and Maggie’s wedding. With just one heartbreaking look, Amelia rejected the proposal, and a devastated Link later arrived at Jo’s door looking for a place to crash.

This season, Jo Wilson (Camilla Luddington) switched surgical specialties and joined the Grey Sloan OB/GYN team, while also beginning a casual fling with Jackson. After her application to adopt baby Luna was denied, she sold her shares of Grey Sloan to Koracick to be able to afford an ace adoption lawyer. Jo eventually got approval to adopt Luna, and the duo later moved into Jackson’s luxurious, recently vacated apartment.

For much of the season, Owen Hunt (Kevin McKidd) and Teddy remained estranged after she cheated on him with Tom and he canceled their wedding. Despite making some progress, Teddy revealed that Allison (who their daughter is named after) was actually her girlfriend who died during the Sept. 11 terrorist attacks. Teddy also experienced a PTSD-induced mental health crisis following DeLuca’s death, and after bouncing back with Owen’s help, she ultimately reconciled with Owen. During a Christmas scene in the Grey’s Season 17 finale, he proposed to Teddy again in a backyard filled with synthetic snow.