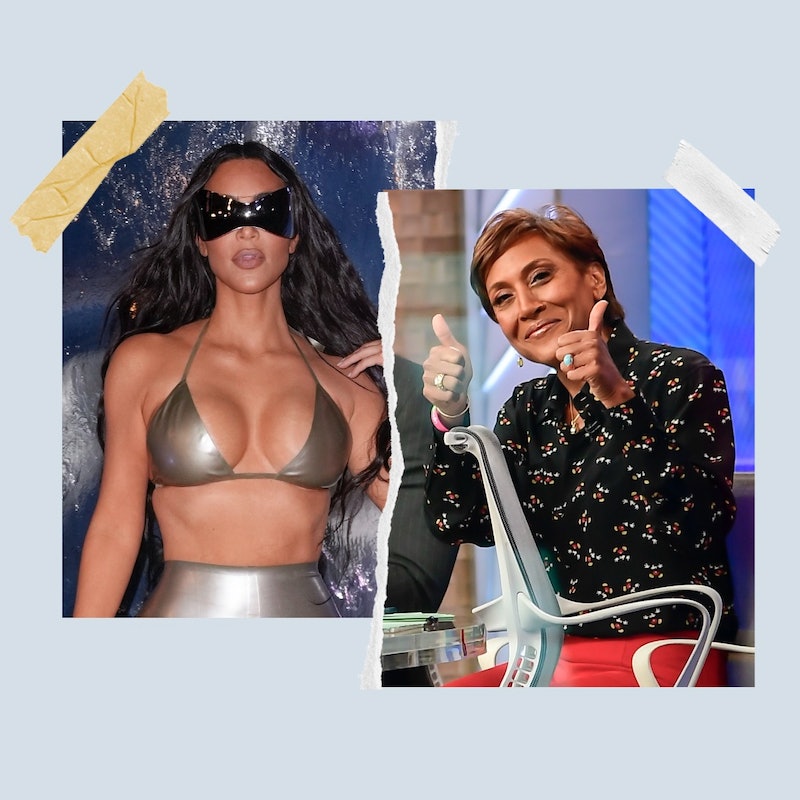 Ahead of the release of their new show The Kardashians, ABC’s Robin Roberts sat down with Kim, Khloé, Kourtney, and momager Kris Jenner to talk about love, business, and that Hulu reality series. The ABC News primetime special interview airs April 6, just a week before the April 14 premiere of The Kardashians. All of this comes 10 months after one of the most famous families in America stepped away from Keeping Up with the Kardashians after 20 seasons on E!

“The special takes an intimate look at the Kardashian-Jenner family with rarely seen home videos and photos,” ABC announced in statement. “For the last 15 years, America watched as the Kardashian-Jenner family shared their private lives with the public through reality TV — redefining celebrity, setting new standards for beauty, and dominating pop culture. This hour-long special explores the family dynamic between the women, the rise of ‘Kardashian Inc.,’ the tension between maintaining privacy, and creating a top reality show and how younger members of the family, Kendall and Kylie Jenner, navigate fame differently.”

Here’s everything we know about the Kardashians’ interview with Roberts, so far.

When Does The ABC News Special Air?

What Does Kim Talk About?

In an exclusive video teaser shared with PEOPLE, Kim opens the teaser with, “It’s hard to live your life on a reality show and then say, ‘I want certain things to be private.’” Roberts then quickly asks the Skims founder, “Do you feel that as much as you’ve accomplished that you’re still fighting for respect?” Kim replies, “Absolutely.”

ABC revealed that Kim will address “her recent divorce from rapper Kanye ‘Ye’ West, the impact of the spotlight on her personal life and family, and her recent comments about women and work.”

Later in the teaser, Roberts questions Kim about her ongoing split with West as a photo of the two is shown: “How have you leaned on your family through the divorce with Kanye?” No answer is given in the teaser. But following her very public feud with soon-to-be-ex-husband Ye regarding parenting their kids that she wishes was private, many online have commented that it’s odd she’s upset that he’s sharing their conversations when she does so much of the same on TV.

Following a chat about one love ending, Roberts pivots to one that’s just beginning. “Exciting for you! A new love in your life!” Kim laughs as the questions continue, with the Good Morning America host asking, “Will we see Pete [Davidson] in the show?” Kim opens her mouth to answer, but the editors cut away quickly to not give the answer away before the special airs.

READ NEXT: A Timeline Of Kim, Kanye & Pete’s Messy Relationship

Days before the teaser appeared on PEOPLE, another short segment from Roberts’ interview aired during Good Morning America. In it, she asks Kim what she meant by her controversial “Nobody wants to work” quote and what she wanted to say about it now. “It became a soundbite really with no context,” Kim clarified. “[It] came off of the notion and the question right before, which was, after 20 years in the business, you’re famous for being famous. My whole tone and attitude changed with the previous question that went into that question about what advice would you give to women. And the advice that I would give is that … having a social media presence and having a reality show doesn’t mean overnight success. You have to really work hard to get there, even if it might seem like it’s easy. It wasn’t a blanket statement toward women or to feel like I don’t respect the work or don’t think they work hard. I know that they do. That was taken out of context, but I’m really sorry if it was received that way.”

What Does Kris Talk About?

In the teaser, Roberts gets right down to dollars and cents with Kris. “Now the Kardashian brand is a multibillion dollar family business, are you the mastermind?” Kris smiles at the comment, but her answer will remain a secret until the special airs.

Roberts leaps from business to pleasure when she mentions to the momager of the family, “Kim has found new love. I think you said his name rhymes with feet?” Kris immediately laughs and says, “I knew this was coming.” As she begins to talk about the budding relationship, she prefaces her comments by saying, “[Kim will] probably kill me.”

What Does Khloé Talk About?

In the teaser, Roberts jumps right into the topic of relationships with Khloé, who replies, “Oh my lord.” Roberts mentions Khloé’s ex Tristan Thompson by name and asks, “Where do things stand? How are you all doing?” The teaser doesn’t give anything more away beyond that, and neither does the star’s face in that moment.

What Does Kourtney Talk About?

The teaser then switches to Kourtney and her new love. A photo of her and Blink-182 drummer Travis Barker pops up on the screen, and the two dive right in, with Roberts congratulating her on her engagement.

She then asks, “How did this happen? He was your friend, Travis. And now you all can’t keep your hands off of one another.” Kourtney responds with a smile and a simple, “I know, can you believe it?”

More like this
Kim Kardashian Gives “Bucket List Dream” Lecture At Harvard
By Alyssa Lapid
Khloé Kardashian Writes Touching Instagram Tribute To Tristan Thompson’s Mother
By Alyssa Lapid
Travis Barker's New Tattoo Is Causing Some Awkward Confusion Among Fans
By Stephanie Topacio Long
Andy Cohen Apologized To Larsa Pippen After A 'RHOM' Season 5 Reunion Dust-Up
By Brad Witter
Get Even More From Bustle — Sign Up For The Newsletter
From hair trends to relationship advice, our daily newsletter has everything you need to sound like a person who’s on TikTok, even if you aren’t.