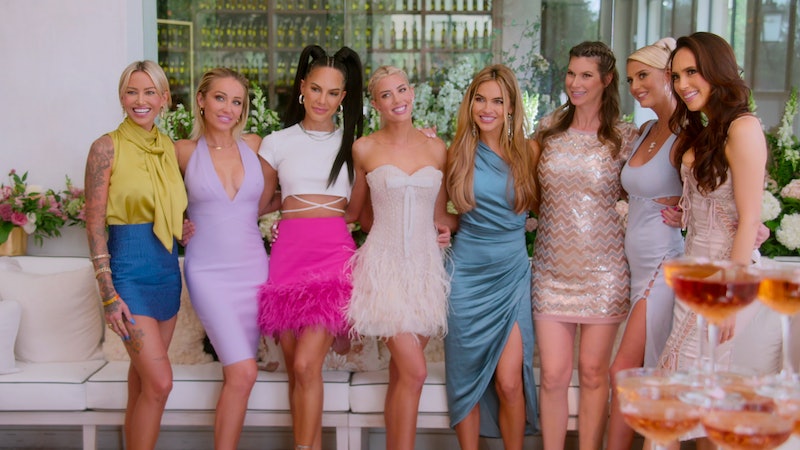 Several months before Netflix even premiered Season 5 of Netflix’s Selling Sunset, Us Weekly reported that the streamer had already renewed the hit real estate-centered reality show for not one but two more seasons. As newly minted boss Mary Fitzgerald cryptically warned in Season 5, though, there isn’t enough desk space at The Oppenheim Group anymore — so somebody’s gotta go. While the Season 5 finale left the futures of several Selling Sunset cast members in jeopardy, fans will have to wait to find out who gets cut from the agency, and possibly the show itself. Here’s everything you need to know about Season 6 of Selling Sunset in the meantime.

Selling Sunset follows the lives of the glamorous team of real estate agents at The Oppenheim Group in Los Angeles. But it's not just luxury homes and high heels — the drama between agents at the brokerage and in their personal lives was and continues to be a major engine of the reality show’s plot.

While Season 4 of Selling Sunset focused on the conflict between Christine Quinn and newcomer Emma Hernan after it was revealed that the realtors had previously both dated the same man, Season 5 centered on Chrishell Stause’s relationship with boss Jason Oppenheim which was confirmed in the summer of 2021. As the fifth season wrapped they had split, so perhaps next season will follow the aftermath of their December 2021 breakup? Watch this space.

On April 12, E! News reported there will also be a Selling Sunset Season 5 reunion, which will likely tee up some Season 6 storylines as the women address lingering questions. According to the outlet, the first-of-its-kind special is slated to tape on April 24 in Los Angeles, and will be hosted by Queer Eye star Tan France.

However Maya Vander told E! in December 2021 that she wouldn’t return to filming full-time for Season 6. “I'm probably not going to be a full-time cast member because it's going to be difficult for me logistically to do the back-and-forth again, especially with a third child,” the realtor who was pregnant at the time, explained. “Realistically speaking, I'm probably going to stay more focused on Miami, my family, and my business here, if we get renewed for another season.” However, after Season 5 filming wrapped, Vander lost her third child in a stillbirth at 38 weeks. She has also since opened her own Florida real estate company, The Maya Vander Group.

Though they’ve yet to make any official announcements one way or the other, Vanessa, Chrishell, and Christine’s futures at The Oppenheim Group were also left up in the air at the end of Season 5. After revealing she’d been considering moving to London to live with her boyfriend, Vanessa’s final scene cryptically showed her wheeling luggage toward an airport’s international departures terminal. Meanwhile, after Emma alleged that Christine offered her client $5,000 to quit working with her, it seemed equally likely that Christine could either quit or be fired from The Oppenheim Group. Finally, Chrishell’s finale breakup with Jason also sowed doubt of whether she could continue working for her ex. As of publication, all three women are still listed as Oppenheim Group agents.

Though Selling Sunset Season 5 wrapped filming in December, the cast was planning to take “a bit of a break” before heading back to work on Season 6, a source told Us Weekly in January. Season 5 of Selling Sunset premiered on April 22, so fans can likely expect a similar four-month release timeline when production does begin on Season 6.

This post will be updated with more information about the Selling Sunset Season 6 cast, premiere date, and trailer when available.

This article was originally published on Jan. 24, 2022