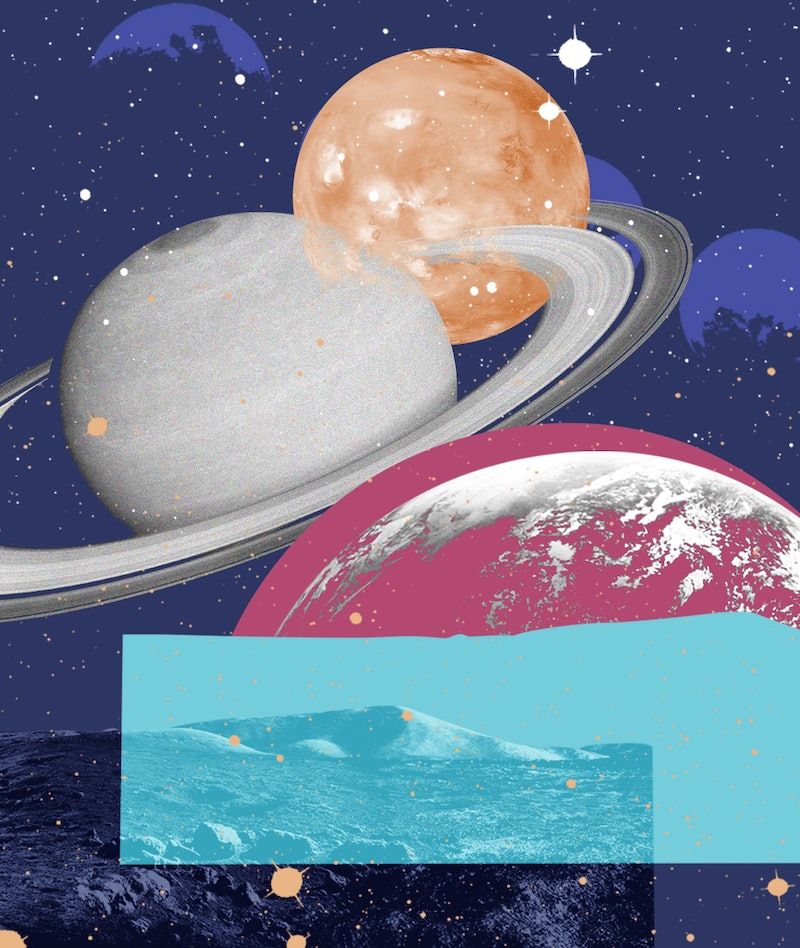 October 2020 was a doozy, as it brought us a Mercury retrograde period, a rare Halloween full moon, and the chaotic lead-up to Election Day, among other turbulent planetary power struggles. But if you thought we might catch a cosmic break this month, think again. The astrology of 2020 is chock-full of intense and rare planetary happenings, and astrology of November 2020 is no exception.

So what did the stars line up for November so far? Mercury retrograde fall 2020 ended on November 3, which kicked off the month with a whole lot of confusion and upheaval (as we're now officially in the middle of Mercury's post-retrograde shadow period, which lasts through Nov. 20). But the rest of the month is packed with astrological surprises, too. For example, we'll see a rare planetary alignment between Jupiter and Pluto, two more retrogrades coming to end, as well as a full moon lunar eclipse on Nov. 30, which will usher us into the year's final eclipse season. On top of it, with all the Scorpio energy that's currently running the cosmic show, we'll all be deep in our feelings for most of the month.

Read on to get the scoop on the major November 2020 astrology highlights so you know what to expect from the penultimate month of this wild n' crazy year.

Jupiter (planet of abundance and expansion) is aligning with Pluto (the planet of darkness and transformations) on Nov. 12 for the third and final time this year — and it serves as a powerhouse of motivation that helps us dig deep in order to win big. "This conjunction will motivate us to achieve success, no matter the cost," astrologer Lisa Stardust tells Bustle. Now's a time to get scrappy about making your dreams a reality — don't leave any stone unturned in your quest for success. This series of alignments only occurs every 13 years, so make the most of it.

Mars retrograde 2020, which began on September 9, has marked a frustrating time full of repressed rage, low energy levels, and a collective struggle to figure out healthy ways to express our anger. But this exhausting backspin is finally coming to an end on November 13, which will reinvigorate our energy levels and re-ignite the flames of passion for our goals.

While this energy is great for making bold career moves, getting back into physical activities, and firing up your sex life, it can also make us feel a little headstrong and overly-aggressive about getting our way. That's because Mars will still be in its home sign of Aries until January 2021, so watch your temper and be sure you're playing fair, even if you're on a mission.

An Influx Of Emotional Scorpio Energy

Scorpio is the fixed water sign of the zodiac, known for its intense emotional energy and razor-sharp focus —and the first three weeks of November comprise the bulk of Scorpio season 2020, which is inspiring all of us to go beneath the surface of our feelings and cut straight to the heart of our emotions. The transformational November 2020 new moon in Scorpio, which takes place on the weekend of November 14, feels like the pinnacle of Scorpio's brooding energy. With the sun and moon aligning in the cosmic scorpion's territory, everyone will be exploring the depths of their shadow sides, so beware of added moodiness and sensitivity.

But that's not all the Scorpio action taking place this month. Mercury retroshade 2020 re-entered Scorpio on November 10, which gives our communication style a moody edge and fixes our mind on life's mysteries. Additionally, love planet Venus enters Scorpio on November 21, so we can expect to get deep, intimate, and possessive when it comes to relationships, too.

We'll experience a sudden vibe-switch once the sun enters Sagittarius on Nov. 21, which break up some of the heavy Scorpio energy that reigned during first three weeks of the month. Sagittarius season 2020 will imbue us with a more spontaneous, optimistic, and adventurous spark, shifting our focus from emotions to passions. "The sun in freedom-loving Sagittarius allows us to embrace new philosophies and defend them," Stardust says. Instead of getting fired up over our own feelings, we'll find ourselves expanding our belief systems and taking on a more worldly mindset.

The third and final planet to end its retrograde in November 2020 is Neptune, the planet of dreams and illusions, which begins moving forward again on November 28. "Elusive Neptune ends its planetary backstroke in Pisces, bringing past deceptions to light," Stardust says. Neptune retrograde 2020, which began back on June 23, was a time to get real about the truth at the core of our fantasies. But now that the retrograde has ended, it could be harder for us to step back and look at things objectively — unless we actively work on blending our tangible efforts with our idealistic dreaminess.

The Gemini Full Moon Ushers In Eclipse Season On Nov. 30

About twice a year, we experience a series of eclipses that align with the full and new moons, and these periods are called eclipse seasons. The November 2020 full moon that rises on the last day of the month kicks off the final eclipse season of the year, ushering in a transitional period of changes in all of our lives. "The lunar eclipse in Gemini allows us to seek intellectual stimulation," Stardust says. Eclipses can be really unstable cosmic events that shake up our realities, so instead of setting full moon intentions, try to sit back and allow the eclipse to show you your fate.

Unpacking the astrology of 2020 is endlessly fascinating — and congrats, because we've almost made it through this hectic year! The planetary happenings coming up in December are some of the most transformational yet, so hang in there through this rocky month as we collectively ring in a new era.