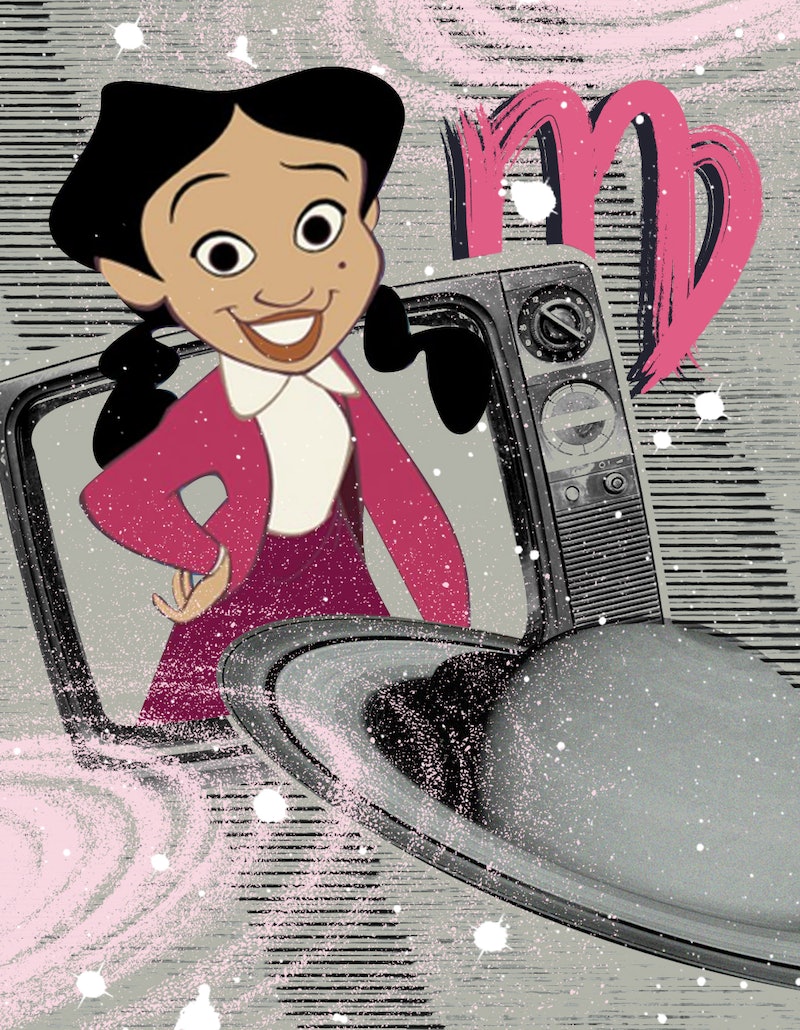 In Astrologically Speaking, astrologers make their case for your favorite character's zodiac sign, based on specific scenes, quotes, and even fashion choices. Here, Nina Kahn, author of Astrology for Life and Wander the Stars, explains why Penny Proud of The Proud Family is most definitely a Virgo. Spoilers for The Proud Family follow.

Nothing gives me a nostalgic Y2K high quite like a Disney Channel original series — and one of the most beloved of the bunch was most certainly The Proud Family. The classic show, which premiered in September 2001, revolved around spunky yet responsible Penny Proud, who navigates the world of friendships, dating, racial issues, school, and more. While the 14-year-old’s lovable cast of friends make regular appearances, the heart and soul of the show is Penny’s eccentric but supportive family, who help guide her through her teenage trials and tribulations with love, life lessons, and plenty of laughs.

With a modernized version of the show coming out Feb. 23 on Disney+, I looked back on the classic series in an effort to get to know the show’s lovable leading lady. As she says herself in the show’s debut episode, “I’m Penny Proud, I’m cute, and I’m loud, and I’ve got it goin’ on.” Given that, what would Penny’s zodiac sign be? Penny’s sassy and strong-willed personality could certainly point to some fire sign energy in her birth chart — my money’s on a Leo moon — but ultimately, her groundedness, logic, and problem-solving abilities prove she’s probably a Virgo sun sign.

Read on to learn why Penny Proud is almost definitely a Virgo zodiac sign.

Throughout the series, Penny earns good grades, fulfills her family obligations, and stays busy with a smorgasbord of extracurricular activities — including football, cheerleading, writing for the school newspaper, singing, dancing, and poetry. Virgos are known for keeping to a schedule and have a natural knack for staying organized, so it makes sense that Penny could responsibly balance so many different activities. While she’s often frustrated by her parents’ rules and antics — especially those of her overprotective father — she (almost) always respects them, like a true-to-sign Virgo.

Penny’s Virgoan sensibilities are on full display in Season 1, Episode 13, “The Party,” when she puts together a slideshow presentation in order to convince her parents to let her throw a party. As she scrolls through the presentation, she rattles off an impressive list of personal accomplishments. She notes that she maintains an A- grade average in school, has held school office for the past four years, has earned 18 Girl Scout patches, and is successfully learning Spanish, among other accolades. Perfectionistic Virgos tend to be high achievers, and their detail-oriented approach allows them to explain things in-depth — so this definitely checks out as Virgo behavior.

Virgos are ruled by Mercury, the planet of communication, words, and thinking. We see this Mercurial influence in Penny’s personality when it comes to her natural affinity for writing. In Season 2, Episode 9, “Pulp Boot Camp,” Penny vies for a spot as a reporter on the school newspaper staff — and in true Virgo fashion, she devotes herself to “looking for the perfect story.” In an effort to get every facet of her article down pat, she goes undercover as a delinquent to craft a compelling piece titled “The Diary Of A Bad Girl.” Naturally, her perfectionist tendencies, attention to detail, and strong writing skills earn her a coveted spot as a student journalist.

Additionally, Penny’s Mercurial Virgo magic also shines through in her extracurricular writing hobbies. In Season 2, Episode 4, “Poetic Justice,” Penny shows off her poetry skills at an open mic night, and gives her friend Dijonay a tutorial on how to write and perform an original poem, too. Attentive Virgos make great teachers, and Penny proves she is no exception. In fact, Dijonay learns so much from Penny’s thoughtful lessons that she winds up winning the poetry competition later in the episode.

Virgos have a reputation for being rigid and nitpicky, but these mutable signs actually excel when it comes to rolling with life's punches. Sure, their critical eyes can spot issues from a mile away, but that simply allows these practical-minded thinkers to come up with solutions more effectively. Penny often proves she can troubleshoot like a true Virgo. For example, in Season 1, Episode 9, “Teacher’s Pet,” Penny goes out of her way to help clear up the decades-old drama between her teacher and her grandmother after realizing that they used to be old friends. This act of kindness highlights the altruistic side of Virgo energy, which seeks to be of service to others and make the world a better place.

Penny uses her finesse to get out of trouble, too. In Season 1, Episode 18, “The Altos,” the Gross Sisters rob Penny of the $50 that she had saved up for a shopping trip. Penny does the right thing by notifying the principal and her parents of the crime, but ultimately, she gets her money back by coming up with a clever solution: She tells the Gross Sisters that they should be storing their stolen stash in a savings account where it’ll accrue interest, and offers to be their financial guru in exchange for the return of her diligently saved cash. As earth zodiac signs, Virgos are known for being smart with money, and Penny’s behavior here perfectly portrays the qualities that are characteristic of this sign.

Penny loves to have fun like any other teenager, but at the end of the day, like a true Virgo, she takes her responsibilities to her family, school, and friends seriously. Penny’s Mercury-ruled Virgo vibes make her a gifted writer, a respectful family member, and a pragmatic problem solver, too. Even when she gets a taste of fame in Season 2, Episode 1, “A Star Is Scorned” — when she steals the spotlight as the star performer of her friends’ singing group, LPDZ — her down-to-earth Virgo nature keeps her humble. (Although her foray into girl group fame was admittedly giving Beyoncé in her Destiny’s Child days — another iconic Virgo!). Penny’s character perfectly illustrates just how independent, spunky, and bright Virgos can be.

More like this
Eleven From ‘Stranger Things’ Is A Cancer Zodiac Sign, An Astrologer Says
By Brittany Beringer
Are Cancer & Virgo Compatible In A Relationship?
By Kristine Fellizar
Your Guide To Earth Signs
By Nina Kahn
Here’s Your Fourth Of July Weekend Horoscope
By Mecca Woods
Get Even More From Bustle — Sign Up For The Newsletter