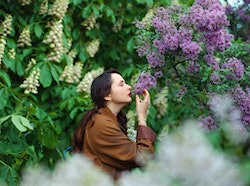 Pisces season always goes hard when it comes to invoking emotionality, empathy, and lots of ethereal energy. But this year’s Pisces season marks an even more potent period for these fishy themes. We’ve got some very important planets banding together in this water sign’s realm, bringing some once-in-a-lifetime magic through March and April. When a group of three or more planets are in the same zodiac sign at the same time, it’s known as a "stellium" in astrology — and the Pisces stellium 2022 is here to plunge us into our feelings and amplify our fantasies.

Pisces is the zodiac’s mutable water sign, and its energy is dreamy, intuitive, and imaginative. Thanks to its watery elemental influence, Pisces is deeply associated with our emotions, and its feelings-focused vibe puts us in touch with our sensitive sides and activates our sense of compassion. Pisces is ruled by mystical planet Neptune in modern astrology and lucky planet Jupiter in traditional astrology. When we have a stellium of planets in Pisces — as we will throughout March and April 2022 — it can intensify the zodiacal qualities of the sign and shift our focus toward less tangible matters, such as our feelings, fantasies, and imaginations.

All the personal planets, which include the sun, moon, Mercury, Venus, and Mars, will be pulled into the Pisces stellium of 2022 at various points, as will Jupiter and Neptune. Expect to spend some serious time swimming through the seas of this feelings-oriented sign. Here’s everything you need to know about the 2022 Pisces stellium and how you can work with its energy.

Stelliums are always special, but 2022’s Pisces stellium is particularly powerful due to the fact that both the traditional and modern planetary rulers of this sign will be part of the cosmic pack. Pisces’ modern ruler — illusive Neptune — will be in Pisces through 2022, and its traditional ruler — lucky planet Jupiter — will spend most of the year here, too. Having both of Pisces’ cosmic captains together in their collective home sign sets the stage for the special stellium action that’s to come, as these two spiritual planets haven’t come together in Pisces in more than 150 years.

The sun entered Pisces on Feb. 18, joining Jupiter and Neptune in the sensitive sign of the fish. This kicked off Pisces season 2022, during which the solar spotlight is illuminating matters of spirituality, sentimentality, and our intuitive senses for a full month. While the start of Pisces season in mid-February amped up our emotions, the real Pisces season power kicks off in March, under the rays of the new moon in Pisces on March 2. This lunation aligns with Jupiter and gives us a gorgeous opportunity to connect with our inner selves and manifest our dreamiest desires.

On March 5, two days after the new moon, the sun connects with Jupiter in Pisces for the first time since 2010, bringing massive opportunities for creative growth and spiritual expansion. A few days later, on March 9, mental planet Mercury will enter Pisces, too — making this Piscean planetary pile-up an official stellium and serving up several weeks of heightened intuition. When Mercury is in Pisces, we’re thinking with our hearts and letting our feelings do the talking.

On March 20, the sun will leave Pisces and kick off Aries season — and it’ll be followed by Mercury, which exits Pisces one week later, on March 27. The stellar hiatus won’t last long, as romantic planet Venus enters Pisces on April 5. During this period, our expressions of love and affection take on especially sensitive and compassionate vibe, and all zodiac signs will be prone to feeling like a hopeless romantic. To add to the magic, Venus is “exalted” when in Pisces, which means it’s easier to connect with the planet’s values.

On April 12, we’ll reach the sparkly zenith of the Pisces stellium, which is a powerful conjunction aspect between Jupiter and Neptune — Pisces’ two cosmic rulers. This Piscean planetary union hasn’t happened since 1856, and it won’t happen again until 2188 — making it a once-in-a-lifetime astrological event that enhances the fantastical energy of this period. With Venus’ loving presence there too, this is a beautiful time to embrace new beginnings in romance, creative arts, and spirituality alike.

On April 14, action-oriented planet Mars joins Venus, Jupiter, and Neptune in Pisces, making this stellium’s redux even more powerful. With Mars in Pisces, we’re prone to simply seeing where the tides take us rather than taking definitive action, and our feelings could have a major influence on the way we chase our goals. This cluster of planets will sail through the Piscean seas together through the end of the month, so lean into your intuitive side, embrace your daydreams, and let your feelings flow freely.

What To Expect From The Pisces Stellium

The influx of Pisces planetary energy that dominates the astrology of March and April will affect all zodiac signs, so it’s a great time to connect with your inner dreamer and embrace some Pisces zodiac traits. When we’re submerged in this water sign’s seas, it’s likely that we’ll feel our emotions in a more powerful way — so instead of repressing your feelings, find ways to connect with and accept them without judgment. This vibe is also lighting up our imagination and offering dreamy bursts of inspiration, so make the most of the Pisces stellium’s creative potential and channel your emotions into something beautiful and symbolic.

Pisces is the final sign of the zodiac, and it represents transcendence and healing, so we may also feel more in touch with our intuitive sides during these months. If you feel inclined, start exploring your relationship to mysticism in a more meaningful way, or dabble in some divinatory arts to strengthen spiritual connection. Practicing some Pisces season rituals can help you align with the natural vibration of these cosmic energies, too. Let go of your need for control and allow yourself to go with Pisces’ ever-evolving flow — because this stellium has so much to teach us about ourselves, if we’re willing to connect with its magic.

More like this
The Lion's Gate Portal On August 8 Is One Of The Year's Luckiest Days
By Nina Kahn
Your Daily Horoscope For August 16, 2022
By Alexandria Lettman
The Best Careers For Virgo Zodiac Signs
By Brittany Beringer
The 3 Most Humble Zodiac Signs
By Nina Kahn
Get Even More From Bustle — Sign Up For The Newsletter