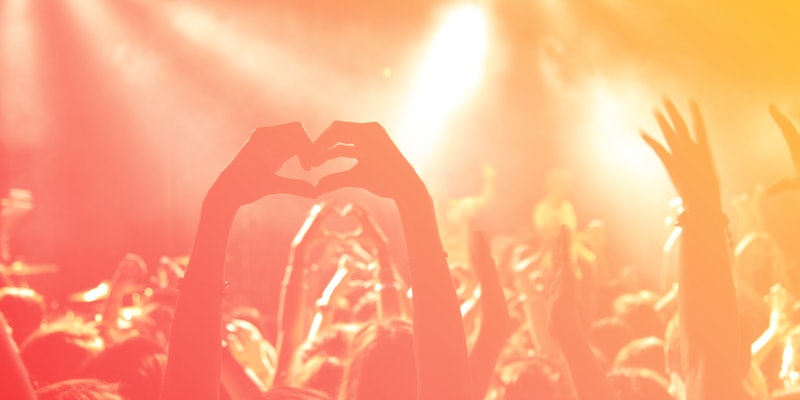 Music has the ability to move us, whether through the hustle and bustle of our morning commute, the throes of a bad breakup, or as the cornerstone of a political movement.

As we've learned from their incredible stories, Bustle's group of dynamic Rule Breakers of 2018 have the ability to ignite change and inspire greatness. And like most fearless powerhouses, they all have a few songs to get them across the toughest of finish lines.

Listen to Bustle's Rule Breakers 2018 playlist, featuring songs that inspire superwomen like Jessamyn Stanley, Mary Lambert and Celina Kimmelman. Let the sounds motivate your goals. You got this... so get after it.

"Is there even a question why?"

Song: "Running Up That Hill"

"People talk a lot of sh*t. They try to minimize me, my work and my success because I didn't come up through the same systems as they did. The chorus of this song reminds me that regardless of what anyone says, I am where I am because I earned it and because of who I am."

"It's my pump-up song. I had it at the end of my special. Petty personally approves every use of his music, and he approved it, and I was like, 'I love him.'"

"When I was at my lowest point, I used to listen to that song and I realized how resilient I am, just like an elastic band; you pull, you pull and pull, and it just springs back. All the issues, I've been bullied, body shamed, discriminated against, ostracized in society, downplayed by people, whether it's friends or family. You can tug on me as much as you want to conform to your ways, to conform to your rules and your views, but I'm not going to do that."

"What I usually do is I pick a genre of music and kind of just stay with it until I move on to a new genre. So right now I've been listening to a lot of Motown, and a lot, a lot of Queen."

"I listen to it in repeat. It's just such a refreshing, exciting thing as a queer woman to hear this song [where] there's no political undertone. It's just Kehlani speaking from her perspective, and it's just a fun song."

"It is the perfect song to bake to. It has a repetitive hook which is perfect when you're scooping a million cookies or sprinkling a million sprinkles. I love anything by Lizzo, but that's my baking song. It's just like, make a million cakes and destroy the patriarchy."

"I pretend she’s singing about me and makes me feel unbreakable."

"'Can’t Be Touched' is my pump up song because Jones Jr. sounds so angry and it’s like him against everything— can’t be touched!"

Artist: Sarah Shook and the Disarmers

"There's a line that says, 'With the cards that I've been dealt, I can't win to save my life.' It might seem a bit nihilistic, but I love the the power of knowing I'm underestimated, so literally any mundane thing I do will be seen as an achievement."

"I think it's an appropriate song."

"I see a lot of my younger self trying to figure out who I was in the lyrics. I went through a lot growing up, tried to hurt myself and even attempted suicide twice because I was so scared that the world would reject me for being trans. This song pushes me to not only look at myself, but to look at others as more than the sum of their most obvious parts. We’re all rule breakers in one way or another and I think 'Pretty Girl' celebrates that."

Song: "Something Happened On The Way To Heaven"

"If I need to improve my mood in under five minutes (or 4:52, to be exact), I put on Phil Collins’ 'Something Happened On The Way To Heaven.' I dare you to listen to it without bopping."

"When I need motivation or I need courage, or when I need reminders that everything is going to be okay, I listen to worship music."

"I have literally not stopped playing it since it dropped. She stands for the same messages of women's sexuality, liberation, empowerment, and multifaceted-ness that I do and it all came together perfectly in this track."

"I have to go with my heart on this one: if you hear that first 'doh, clap" of 'Uptown Funk' and aren't immediately at max pump, I don't trust you. Plus, 'Make a dragon wanna retire, man' is arguably the greatest lyric of all time."

Song: "Look What You Made Me Do"

"To me, it's not a revenge song, it's just like, okay, I'm coming back at you now. I'm going to keep putting up a fight."

"Being brave can be the smallest littlest thing. It's about silencing that doubt in your mind, or taking it a little bit further."

"The song I've had on repeat for the past few months is 'Let Me Live,' by Kehlani off the A Wrinkle In Time soundtrack. I love this song because the lyrics are literally the heart of Smile On Me!"

"'I make money moves' is a great pick-me-up lyric to remind yourself that you're a boss and you got this."

"I like my f*ck you song to be a little grimy."

"It's my gym song, but it changes all the time."