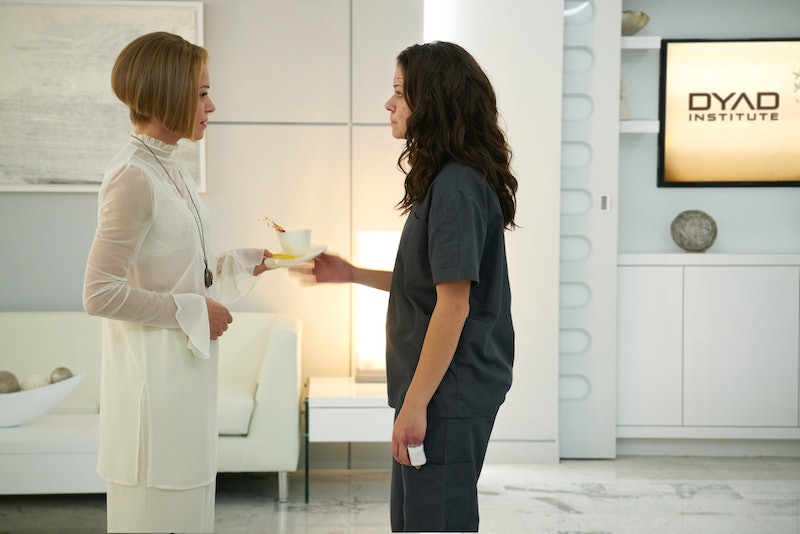 Over the past 40 episodes, Orphan Black has wowed audiences with both its thrilling sci-fi storylines and star Tatiana Maslany's incredible performance. Speaking of those storylines, though, they have admittedly gotten a bit convoluted over the years — so you'll be forgiven if you need an Orphan Black Season 4 recap before diving into the fifth and final season of the series. Yes, that's right: Orphan Black Season 5 will be its last, and I don't know if I'm ready to say goodbye to Clone Club just yet.

As if the inclusion of philosophies, organizations and experiments with fancy made-up names like Neolution, Proletheans, Dyad Institute, Project Leda, and Project Castor weren't enough, Season 4 had to go and throw another group into the mix: Brightborn Fertility and its parent company, GeneConnexion. Fans also met plenty of new characters — including a new, never-before-seen clone — said goodbye to some old favorites, and, in one case, even saw a presumed dead favorite return from the grave.

Clone Club acolytes were thrilled when Tatiana Maslany finally won the Emmy for Best Actress in a Drama Series last year… and it's no surprise that Season 4 was finally the one that earned her the trophy, when you consider everything that her many clones got up to in the show's penultimate season.

Our main clone spent most of the season trying to get a handle on the slippery war that was brewing within Neolution itself — between the old guard, represented by Susan Duncan and Project Leda (which uses old-fashioned cloning in order to create the perfect human), and the new guard, represented by Evie Cho and Brightborn (which uses icky maggot-bots implanted in people's cheeks to rewrite their DNA in order to create the perfect human).

In the midst of this conflict, Sarah is also forced to grapple with some relatively "normal" family drama, when Felix locates his biological sister, Adele, and Sarah doubts both their relation and Adele's motives. Ultimately, DNA tests confirm that the pair is related and Sarah is forced to eat crow and apologize to her irate adopted brother. (Oh, and also her daughter Kira has started exhibiting some vague psychic powers. So there's that.)

In the finale, Sarah journeyed to the Island of Dr. Moreau — I mean, the island of Susan Duncan — to rescue her sestra, Cosima… but a violent confrontation with the newly diabolical Rachel ends with her lying bleeding and alone on the beach, where she learned that Kira and Mrs. S had been taken captive by Ferdinand, desperate to reunite with his beloved Rachel.

In a series of flashbacks scattered throughout the season, it was revealed that Beth was investigating a series of murders in which corpses were found with their cheeks cut out. It turns out that this was Neolution's doing, as they were harvesting the maggot-bots they'd implanted in unwitting test subjects. (Beth also learned that her colleague Detective Duko was in on the scheme.) When she was almost discovered, Beth ran away from the scene of the crime — and wound up shooting the person who was tailing her, Prolethean spy Maggie Chen.

In the course of her investigating, Beth also met Evie Cho, who told her if she wanted to bring down Neolution, she needed to kill Susan Duncan. But when Beth went to assassinate Susan, she realized that Susan wasn't a threat (in fact, she loved her clones), and that Evie just wanted Beth to kill Susan so Evie could usurp her position. Beth confronted Evie, but the nefarious doctor told the clone that she knew too much and was therefore a danger to the lives of everyone she loved, who might be wiped out Helsinki-style. So, in order to protect her sestras, Beth stepped in front of a train… and the entire series came full circle.

Fans were introduced to one new clone in Season 4: test subject 3MK29A, real name Veera. The scarred hacker was the only survivor of the original Helsinki incident, and has been gunning for Neolution ever since the organization killed her friends years ago. She was working with Beth in her investigations before her suicide, she's the one who warns Sarah, Kira, Mrs. S, and Kendall to flee Iceland just as they're about to be apprehended, and she's also the one who makes Clone Club aware of the existence of Evie's maggot-bots.

When M.K. realizes that Sarah is collaborating with Ferdinand (who also saved Sarah when someone tried to kill her with a maggot-bot) in order to locate Susan Duncan, she attacks the former Neolutionist by taping him to a pressure bomb. Sarah convinces M.K. not to kill Ferdinand, and she absconds into the night with the man's money instead.

Cosima's storyline in Season 4 was consumed with discovering a cure for her own illness while simultaneously pining for her missing and presumed dead lover, Delphine. Eventually, she and Susan Duncan agree to work on creating a cure together — but before they can, Kendall (the clones' original) is kidnapped. The clones assume that Susan betrayed them, but Kendall's kidnapping turned out to be the work of Evie Cho, who was determined to put an end to Susan's cloning program once and for all, concerned that the archaic technology was drawing too many resources from more pressing projects… like her own maggot-bots.

So while a distraught Cosima looked on, Detective Duko murdered Kendall and then incinerated her corpse to prevent the clones from using any of her DNA. At a loss, Cosima briefly entertains the idea of experimenting on herself by implanting a bot in her own cheek, but Felix talks her out of it. Eventually, she has the brilliant idea of fertilizing a Project Leda egg with a Project Castor sperm to create an embryonic stem cell they can experiment on. This leads to a breakthrough and Cosima and Susan are finally able to come up with the cure… which Rachel promptly steals for herself.

Her research stolen, Cosima flees with young clone Charlotte to a camp on the island where Delphine also turns up, very much alive.

Alison and Donnie's drug dealing past finally caught up with them when Donnie was arrested… by none other than Detective Duko. The secret Neolutionist then threatens Alison that Donnie would be killed in prison unless she betrays Sarah. Although it initially seems like Alison has agreed to the deal, it's revealed that she and her sestras have set a trap, where he's finally gunned down by Mrs. S.

If I have one qualm about Season 4, it's that it was tragically light on Helena. Although the pregnant clone was staying with the Hendrixes, she could tell that her own impending motherhood was depressing the infertile Alison, so she took off for parts unknown. Fortunately, Helena turned up again just in time to save her former hosts, killing EMT and Neolution agent Frank, who was about to implant Alison with a bot.

While the self-aware members of Clone Club were investigating Evie Cho's deeds, naïve clone Krystal was also conducting her own investigation into Brightborn… except the "beauty professional" thought that the company's misdeeds involved stem cells in beauty products, not genetically-modifying cheek implants. Although Sarah and Felix attempt to induct Krystal into Clone Club, she refuses to see the resemblance between her and her frumpy genetic identical, and remains just as blissfully unaware as ever.

After collaborating with the Clone Club for most of the season, Rachel betrays them all at the last minute, stealing Cosima's research, killing Susan, and attacking Sarah. She also manages to get rid of Evie by leaking a video of the doctor admitting to the fact that Brightborn euthanizes deformed babies, becoming the new head of Neolution after Evie's killed for her failures. Oh, and her new prosthetic eye has been giving her visions of swans and a bearded man who may or may not be P.T. Westmoreland, the man who founded Neolution centuries ago and is apparently somehow still alive. As the finale ends, the egomaniacal clone eagerly awaits her meeting with Westmoreland himself.

Will the sestras be able to bring down Rachel before she destroys them all? Find out when Orphan Black Season 5 premieres this Saturday, June 10.