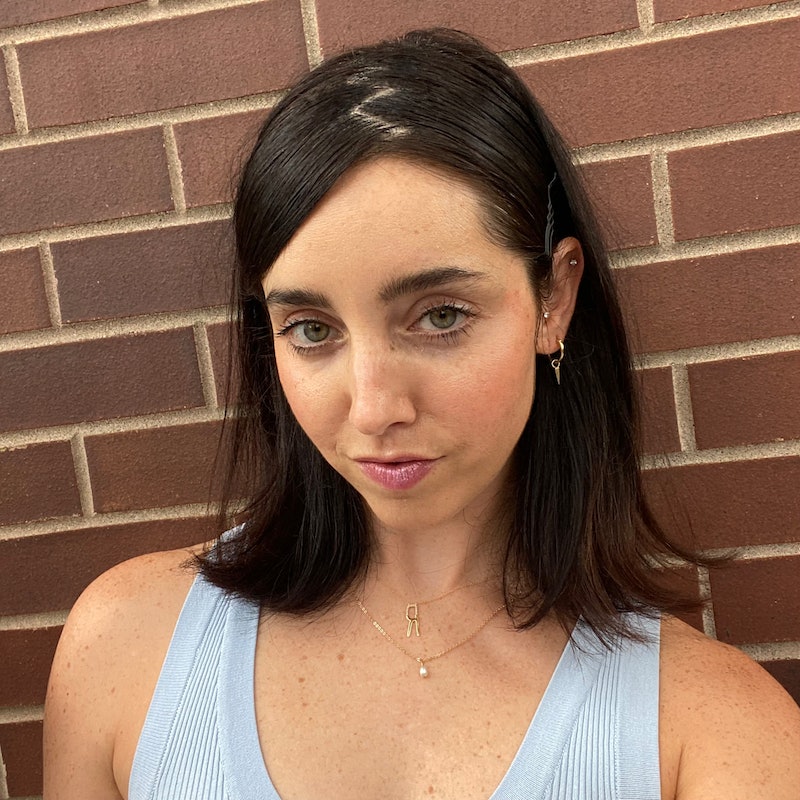 I’ve been all for the resurgence of ‘90s beauty and fashion styles. But the recent boom of Y2K trends gives me all the feels: Butterfly hair clips, baby tees, frosted makeup, and mesh tops make me nostalgic for days when I shopped at Limited Too and tried emulating Zenon (of Zenon, Girl of the 21st Century fame, naturally). And this is why I’m currently obsessed with the zigzag part.

Recently, I had the opportunity to get my hair done by celebrity hairstylist Laura Polko, the pro behind many of Bella and Gigi Hadid’s coolest looks. “What style would you like?” she asked me as I plopped into the salon chair. “Something with early 2000s vibes,” was my response. Five minutes later and Polko was combing my strands into a zigzag hair part.

After my hair was slicked down with gel and pomade — to really put the zigzag in the spotlight — Polko blow-dried my ends to flip out (!!!) and used a comb to zhuzh volume at my crown. And voila: I looked like I was ready to get my ears pierced at Claire’s.

At first, I felt like I was staring at a different person in the mirror. Every day my hair looks the same: I let it air dry into its semi-smooth natural texture and that’s it. Gel hasn’t touched my strands since I scrunched it into crunchy waves in middle school (remember that trend?). I’ve avoided letting my ends flip out since the style’s heyday in the early 2000s. But... I was really into my look.

“People are definitely very here for something a bit different, and so the 2000s stuff is fun,” says Polko of the era’s hair trends. With the zigzag part in particular, it’s easy to see the appeal. By just parting your hair in this funky way — versus the standard middle or side part — you’ve got yourself a look. It’s also perfect for unwashed hair. “It works really, really well with greasy hair and will hold better,” says Polko. “You can just pull it back into a pony and be like, ‘look, I tried.’”

In other words, a zigzag part is, basically, the dream hairstyle for lazy girls like myself. You just have to nail your technique. “The hardest part is starting it,” says Polko. “You're going to start at a diagonal, and then you’re going to line your comb up for the next diagonal. Make sure they’re equidistant.” Any hair type or texture can rock a zigzag part, too. That said, Polko recommends curly hair types to straighten their strands first so it’s easier to do. Then, once the part is done, you’re free to wear a slew of chic hairstyles.

I was ready to experiment. Read on for the four zigzag part hairstyles I played around with, along with how to copy them for yourself.

The quickest way to make a ponytail more interesting is to wear one with a zigzag part. As is the case with any zigzagged look, you’ll want to start by slicking the top of your head down so the part is visible. You’ll also need a fine-toothed comb for getting a super-defined, clean part. On my hair, I went with Polko’s product recommendations: Aquage’s Finishing Spray mixed with the brand’s CBD pomade for ultimate sleekness (and no flyaways). Then I just threw my hair into a low pony for the easiest casual look I’ve ever done.

This was the most Y2K/Zenon of all the looks. I kept my hair in the front slick and straight, then twisted my lengths into a claw clip. The end result? Spiky strands sticking up at the top à la Bella Hadid. Obviously this was meant to be worn with an early 2000s-style printed mesh top. This might become my go-to look for days when I want my hair out of my face.

With the 2000s coming back in full force, you’re going to have to face the return of pigtails. For a one-two punch of the era’s beauty trends, I paired my zigzag part with two loose ponies on the side. It’s cute, but... this is the one hairstyle I wouldn’t wear out in public. I’m just too old.

4. Down With Flipped-Out Ends

The one zigzag look I didn’t DIY is this one. Polko gave me the perfectly smooth part, texture in the back, and subtly flipped-out ends that had me feeling so nostalgic. I wound up running some errands with this hairdo and got lots of compliments — it’s definitely a style I’d wear again. Now all I need are some platform flip-flops and a Juicy Tube.

More like this
The Chicest ’90s Updo Hairstyles To Try
By Paris Giles
Your No-B.S. Guide To Female Pattern Hair Loss Treatments
By Parizaad Khan Sethi
15 Must-Have September Beauty Launches, According To Our Editors
By Rachel Lapidos
This Week’s New Makeup Releases & More Beauty Headlines
By Audrey Noble
Get Even More From Bustle — Sign Up For The Newsletter