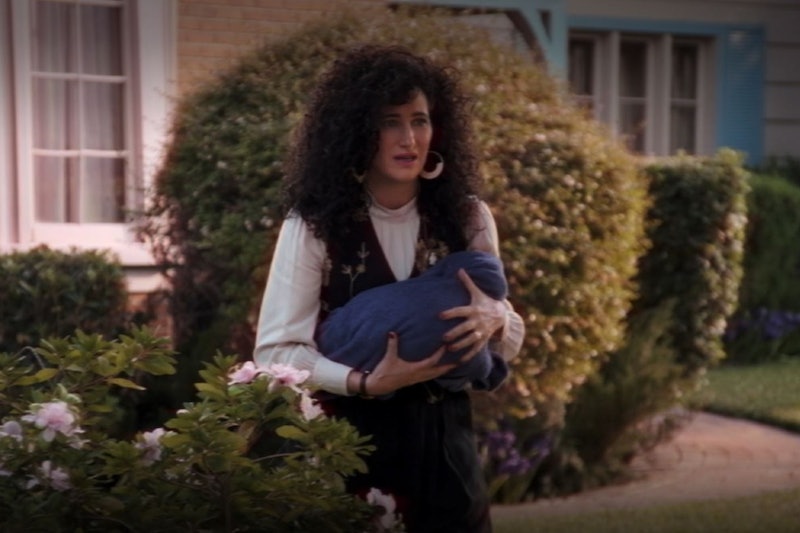 Up there with Olivia Rodrigo’s “Good 4 U” and BTS’ “Butter” is a contender for bop of 2021: Kathryn Hahn’s “Agatha All Along,” which she performed in witchy character in WandaVision. In the trippy Disney+ sitcom, Wanda Maximoff (Elizabeth Olsen), aka Scarlet Witch, and Vision (Paul Bettany) try to live as a regular suburban couple following Thanos’ defeat. Well, kind of.

Agatha Harkness (Hahn), one of the most powerful witches in Marvel history, assumes the alter ego Agnes, the couple’s nosy neighbor. Though she’s later revealed to be the master manipulator behind the couple’s troubles, Hahn’s character quickly became a fan favorite, whether she’s aerobicizing in full ’80s neon gear or singing about her villainy to Emmy Award-winning success. Now there’s cause for celebration: Fans will be seeing more of her oddball role.

On Nov. 12, Disney+ announced its lineup of new projects from the Marvel Cinematic Universe, and among them is Hahn’s very own spinoff, Agatha: House of Harkness. “Be sure to hide all dogs named Sparky,” the press release read. Jac Schaefer, who created and produced WandaVision, will be helming the spinoff. Here’s everything to know about Agatha: House of Harkness so far, including Agatha’s comic book origins, the show’s plot, and cast.

The Agatha: House Of Harkness Plot

For Agatha’s character, WandaVision ended exactly where it began — with her living under the identity of nosy neighbor Agnes. Only this time, it’s not of her own volition: Scarlet Witch trapped her in that identity in the Hex.

According to the Disney+ press release, the new show “will reveal more about the character first introduced in Marvel Studios’ WandaVision.” It’s vague, yes, but it’s also full of potential. Hopefully, fans get more of Agatha’s backstory in there. She’s lived such a long life, after all.

In both the comics and WandaVision, the centuries-old witch is shown to have lived through the Salem Witch Trials. (Her youthful glow is presumed to be thanks to her powers. Think of it as magical Botox.) Another similarity is that both feature Agatha with her sartorial staple: a brooch. It’s the accessory that led fans to speculate about Agnes’ real identity.

But the key difference is that she wasn’t evil in the books. At least, not entirely. Sure, she stirs the pot, sometimes crossing ethical lines, but Agatha’s also painted as a maternal figure, mentoring mutants with magical abilities. During her first appearance in Fantastic Four (1961) #94, she pretends to be a nanny to train a young Franklin Richards, in her witchy ways. The son of Fantastic Four’s Susan and Reed Richards, Agatha sensed his potential.

Later on, Agatha also trains Wanda and helps the young mutant control her unstable powers. She even supports (kind of) Wanda through her grief after she loses her children with Vision, wiping her memories. (Agatha would know something about grief, as she had to fight her own son, Nicholas Scratch, when he turned evil.) Whether the new Disney+ series will play up her villainy even more is to be determined.

The Agatha: House Of Harkness Cast

Only the Emmy-nominated Hahn is set to reprise her role so far. There are rumors that Olsen may appear, but those are yet to be confirmed. Wanda is a key player in Agatha’s life, so if the series ventures into their longstanding relationship, Olsen will likely come back.

If the series begins where WandaVision ends, there’s also a possibility that some of the neighborly characters from Westview will rejoin her. In an interview with The New York Times about Agatha’s WandaVision fate, Hahn said, “She needed to rest for a hot second ... She loves having the companionship — loves the mailman, loves Ralph, loves Dottie.” If Schaefer takes her word into account, we might just see the familiar faces of Amos Glick (the mailman), Evan Peters (Ralph), and Emma Caulfield Ford (Dottie).

The Agatha: House Of Harkness Release Date And Trailer

Since the show was only recently announced, it won’t hit the streaming platform for a while, with no set release date (nor trailer) set yet. Not to worry, though. There’s a lot lined up for MCU fans in the coming year, including the highly-anticipated series Ms. Marvel, Moon Knight, and She-Hulk. Films like Doctor Strange in the Multiverse of Madness and The Marvels are also slated to debut in 2022.

WandaVision ran for nine episodes with only one (!) featuring a Kathryn Hahn song number. However many episodes her new show will have, please let her release a full album this time around.

This post will be updated as more details about Agatha: House of Harkness are released.