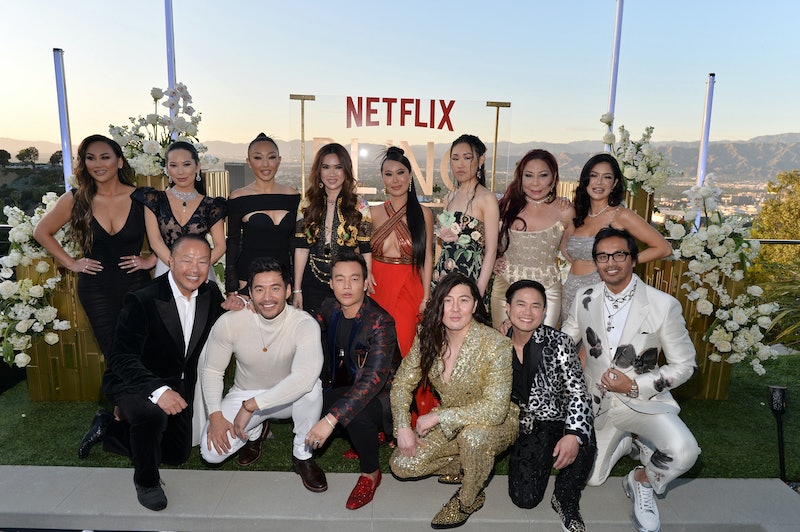 There are TV shows about people with money, and then there’s Bling Empire. The popular reality series follows “uber-rich Asians,” as Netflix puts it, as they run their businesses, care for their families, and stir up drama, especially between “rivaling queens Christine and Anna.” Most of the stylish cast members aren’t just rich, they’re incredibly wealthy, with some claiming net worths into the hundreds of millions of dollars. To put that into perspective using another Netflix show, the two richest Selling Sunset cast members are both worth an estimated $50 million each.

Bling Empire became a quick hit for Netflix after it debuted in January 2021 — so much so the streamer renewed it for another go just two months later. Season 2 premiered May 13, so now is a great time for a refresher detailing who returned for more screen time, who joined the cast, and how much money they all individually have in their bank accounts.

Read on to learn how much each of the Bling Empire cast members are worth.

Anna Shay is far and away the richest member of the Bling Empire cast. The socialite inherited her wealth from her father Edward Shay, who made a vast fortune by founding the defense contracting and weapons-making business Pacific Architects and Engineers. After he passed away in 1995, his son Allen assumed control, and 11 years later the firm was purchased by Lockheed Martin for $1.2 billion. That sum was reportedly split between the siblings, giving her $600 million. Shay is not afraid to spend her money, but she’s also very charitable with those around her.

Before Bling Empire, Cherie Chan was already on her way to becoming a star. She reportedly signed a record deal with Sony Japan, and while she spent time working on music, it doesn’t appear that anything was ever released. Chan apparently gave up that dream at the behest of her mother, who wanted her to find a career that was more “stable.” She then went on to found an alcohol brand called Religion Tequila. She is also an heiress to a denim fortune of untold millions.

Chan is now engaged to Jessey Lee, as she popped the question during Season 1. He also comes from money, but that hasn’t stopped him from making his own millions. He’s founded a furniture company, and he’s used his cash to invest in other firms based in an array of industries, including hospitality, food, health, and tech. Their combined net worth is $200 million, per Screen Rant.

Gabriel is a plastic surgeon in Los Angeles, and he co-owns the Beverly Hills Plastic Surgery, Inc. with his wife. While Gabriel does the procedures, Christine is the company’s managing director. Together, they have a net worth of $80 million, according to The Daily Mail.

While Christine may spend large sums on luxurious and fashionable outfits, she and her husband also give quite a bit of money away. She claims that “50% of every net dollar that comes into Beverly Hills Plastic Surgery” eventually finds its way back into the community.

One of the new additions to Season 2, Mimi Morris’s net worth is tough to pin down, as it’s connected to her husband’s, and how much he makes and is worth is also not clear. Mimi is married to Donald Morris, the CEO of Morris Group International. The firm is actually a “family of companies” that appear to work in the business-to-business space across various industries. While one source pegs the couple’s net worth as high as $800 million, another suggests it’s $52 million.

Jaime Xie grew up wealthy, as her father is Ken Xie, the founder of Silicon Valley cybersecurity company Fortinet. His net worth is reportedly just more than $5 billion, but Jaime has her own career and her own cash. While she apparently trained at a young age to become an equestrian, and at one point even had dreams of going professional, she is now a fashion influencer and vlogger, and she discusses new styles and the industry on social media and YouTube. Between the money she receives from her family and on her own, it’s reported that Xie has a net worth of $50 million, according to the South China Morning Post.

While Kane Lim comes from a rich family, he reportedly was raised with few luxuries, as his parents wanted to teach him the value of hard work and money. When he was still just a teenager, Lim went into business for himself. He explained his quick rise to his own wealth in an interview as such: “Started investing at the age of 17. Took a small loan from my father and paid him back in two months and by the age of 18-19, I made a sum of around seven figures. Invested in fashion and with the money I used it to invest in stocks.” Between investments and his fashion influencing, Lim’s net worth is estimated to be as high as $20 million, per Screen Rant.

Throughout the past decade, Kim Lee has worn many hats and had many jobs, and she’s become at least successful in some of them. She started modeling when she was just a teenager, and she has posed in magazines such as Maxim, GQ, Vanity Fair, Sports Illustrated, Elle, and FHM Singapore, which once called her the sexiest woman in the world. She has also ventured into music, DJing and hosting the TV show Yo! MTV Raps Asia. Lee has also acted in a few small roles, perhaps most notably in The Hangover Part II. What she is reportedly worth varies from publication to publication, and numbers as low as $500,000 and as high as $10 million have been published.

Another new cast member for Season 2, Dorothy Wang has not only been on TV before, she’s actually co-starred in a different reality show about being rich. Wang was featured in E!’s Rich Kids of Beverly Hills for several years, and now she’s back for more time in front of the cameras. It appears that much of Wang’s wealth come from her father, the former CEO of Golden Eagle International Group, and he’s a billionaire.

Throughout her life, Kelly Mi Li has worked in life insurance, real estate development, the food and beverage industry, and she reportedly even had a hand in launching a tech incubator in Los Angeles. She has invested in companies like Change.org and MeUndies. Li is credited as an executive producer on Bling Empire. In the first episode of Season 1, Li revealed that she was once married to a millionaire, but that he was arrested. Since they divorced, she’s been making her own money, and Yahoo puts her net worth at $5 million.

Andrew Gray is perhaps best known for his role in Power Rangers Megaforce, in which he portrays the Red Ranger. He has also appeared in the programs Dirty Talk and Betrayed, among others. Outside of acting, he has made money as a model for brands like Tanqueray Gin, Zara, and Sony.

With millions of followers across social media and YouTube, Guy Tang is a successful hairstylist and colorist, and his list of clients includes the Kardashians. He now spends a lot of his work time speaking and teaching. He is well-known for his technique, which allows him to create a rainbow effect in someone’s hair, though it’s not easy or cheap. His work can sometimes take 12 hours, and it may cost the client as much as $1,000. Tang now has a line of coloring products, which are sold at Ulta Beauty. He reportedly has a net worth of $2 million, according to Yahoo.

While most, if not all of the Bling Empire cast can claim net worths into the millions, Kevin Kreider may not be one of them — yet. He lives a modest lifestyle when compared to his castmates. He claims he pays just $1,000 a month in rent, and he has roommates. Some outlets have suggested he is worth $10 million, but he has confirmed that is not true, while others have reported that he is worth $10,000. At one point he was $26,000 in debt, though he has settled that. For a while, he made a living as a personal trainer, and later as a model, posing for magazines such as Men’s Health and Men’s Fitness. Now, he’s an actor and a reality TV star.

More like this
Which RHODubai Housewife Has The Biggest Net Worth?
By Hugh McIntyre
Charlotte Tilbury Muse Phoebe Dynevor Triples Her Income In One Year
By Catharina Cheung
‘Bridgerton’ Stars Nicola Coughlan & Luke Newton Got Polin Fans In A Tizzy
By Stephanie Topacio Long
Taylor Armstrong Would “Definitely” Return To RHOBH After Her Season 3 Exit
By Brad Witter
Get Even More From Bustle — Sign Up For The Newsletter