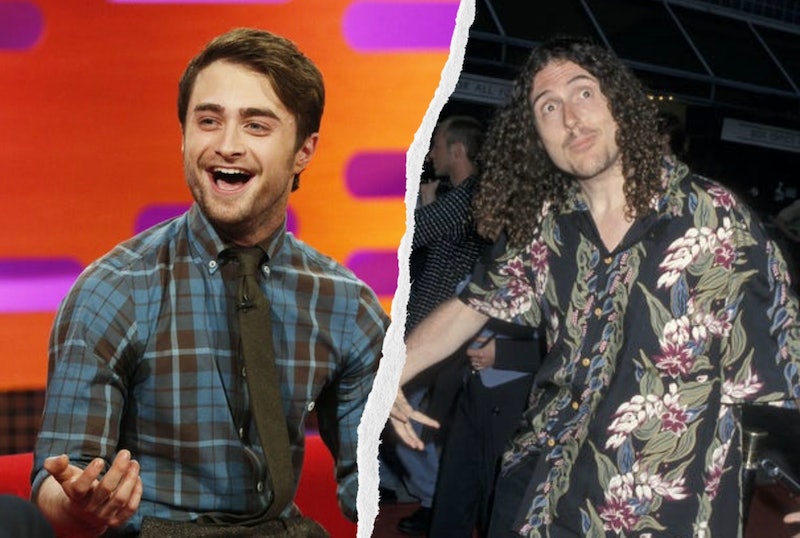 “Weird Al” Yankovic has been known to embody other notable pop culture figures since his debut in 1976, releasing iconic hit parody songs from “Eat It” and “Fat” (Michael Jackson’s “Beat It” and “Bad,” respectively) to “White & Nerdy” (Chamillionaire and Krayzie Bone’s “Ridin’”). But after more than four decades in the game, it’s time for someone else to step into the legendary comedic musician’s shoes. On Jan. 18, Roku Channel announced a biopic about Yankovic, titled WEIRD: The Al Yankovic Story, is currently in the works. Produced by Funny or Die and Tango, the biographical comedy is set to star Daniel Radcliffe as the A-list song spoofer. Here’s everything you need to know about WEIRD: The Al Yankovic Story, including its plot, cast, trailer, and release date.

Born Oct. 23, 1959, Yankovic was raised Christian and rose to fame after one of his first songs, “Belvedere Cruisin’,” was played on comedic DJ Dr. Demento’s Southern California-based radio show — which his mom banned him from listening to — at just 16 years old. His parody songs received national attention in the ’80s and have since garnered praise and respect from musicians including Jackson and Lady Gaga, who’s referred to being parodied by Yankovic as a “rite of passage” for any artist’s career. (He released a spoof of “Born This Way” titled “Perform This Way” in 2011.) Over his 40-plus years in the industry, Yankovic’s won four Grammy Awards and received a total of 16 nominations.

As expected with anything surrounding Yankovic, Roku’s press release for the forthcoming movie is laden with jokes. “The biopic holds nothing back, exploring every facet of Yankovic’s life, from his meteoric rise to fame with early hits like ‘Eat It’ and ‘Like a Surgeon’ [a parody of Madonna’s ‘Like a Virgin’] to his torrid celebrity love affairs and famously depraved lifestyle,” reads the description, per People. Unless the filmmakers plan on embellishing the artist’s life story, which they may, don’t be fooled by their promise to explore many “torrid celebrity love affairs.” Yankovic has been married to 20th Century Fox marketing executive Suzanne Krajewski since 2001, and the pair shares a daughter, Nina, born in 2003.

Furthermore, the tongue-in-cheek plot summary ensures viewers will embark “on a truly unbelievable journey through Yankovic’s life and career, from gifted child prodigy to the greatest musical legend of all time.”

“When Weird Al first sat me down against my will and told me his life story, I didn’t believe any of it,” said co-writer and director Eric Appel of Funny or Die, per Deadline, “but I knew that we had to make a movie about it.”

Adding his voice to the press release, Yankovic joked, “When my last movie UHF came out in 1989, I made a solemn vow to my fans that I would release a major motion picture every 33 years, like clockwork. I’m very happy to say we’re on schedule.”

Fresh off the set of HBO Max’s Harry Potter reunion special, Radcliffe will portray Yankovic, hopefully showing off the singing skills fans know he possesses from starring in How to Succeed in Business Without Really Trying on Broadway in 2011. The biopic will mark the actor’s latest comedic effort, following his roles in 2020’s Unbreakable Kimmy Schmidt: Kimmy vs. the Reverend and forthcoming action romance The Lost City alongside Channing Tatum and Sandra Bullock.

“I am absolutely thrilled that Daniel Radcliffe will be portraying me in the film,” said Yankovic in the WEIRD press release, per Deadline. “I have no doubt whatsoever that this is the role future generations will remember him for.”

Radcliffe’s casting as the musician is especially notable, as Yankovic has never released an official parody song about the actor or Harry Potter. In fact, the musician’s only brush with the J.K. Rowling-created series came in the form of guest appearances on The Grim Adventures of Billy and Mandy in the early 2000s. Three Harry Potter parody episodes titled “Toadblatt’s School of Sorcery,” “Nigel Planter and the Chamber Pot of Secrets,” and “One Crazy Summoner” featured Yankovic as the voice of the Squid Hat, aka a spoof of Hogwarts’ Sorting Hat, per IMDb.

Hulu unveiled the first official image of Radcliffe as Yankovic on Feb. 25, and the resemblance is truly uncanny. “Wearing the Hawaiian shirt is a huge responsibility that I don't take lightly,” he said in a statement released alongside the image, which sees Radcliffe donning the singer’s signature curly hair and aviator glasses while playing an accordion. “I’m honored to finally share with the world the absolutely 100 percent unassailably true story of Weird Al’s depraved and scandalous life.”

Several other WEIRD cast members were announced on March 2, including Evan Rachel Wood (Westworld) as Madonna, who notably presented Yankovic with the idea to parody “Like A Virgin” as “Like A Surgeon” in the mid-’80s, marking a rare instance of a song’s actual artist helping to craft his spoof. “The secret's out! I am having WAY TOO MUCH FUN playing the iconic Madonna in [Roku’s] WEIRD: The Al Yankovic Story with Daniel Radcliffe,” Wood wrote on Instagram alongside a photo of her as the seven-time Grammy winner.

The first official teaser trailer for WEIRD, released May 3, offers a better glimpse of Radcliffe (and his abs) as Yankovic. As for a release date, the streaming service isn’t yet offering specifics, though it does say the film will be coming this fall.

This post will be updated with the premiere date and additional details as more information on WEIRD becomes available.

More like this
Watch The Dramatic First Trailer For Netflix's Jennifer Lopez Documentary
By Alyssa Lapid
Lisa Marie Presley Reviewed Baz Luhrmann’s ‘Elvis’ Movie On Twitter
By Grace Wehniainen
Kim Kardashian Reacts To Kanye West’s Diss Song “Eazy” On 'The Kardashians'
By Jake Viswanath
Britney Spears Met The Weeknd & Sam Levinson, So She May Actually Be On 'The Idol'
By Jake Viswanath
Get Even More From Bustle — Sign Up For The Newsletter