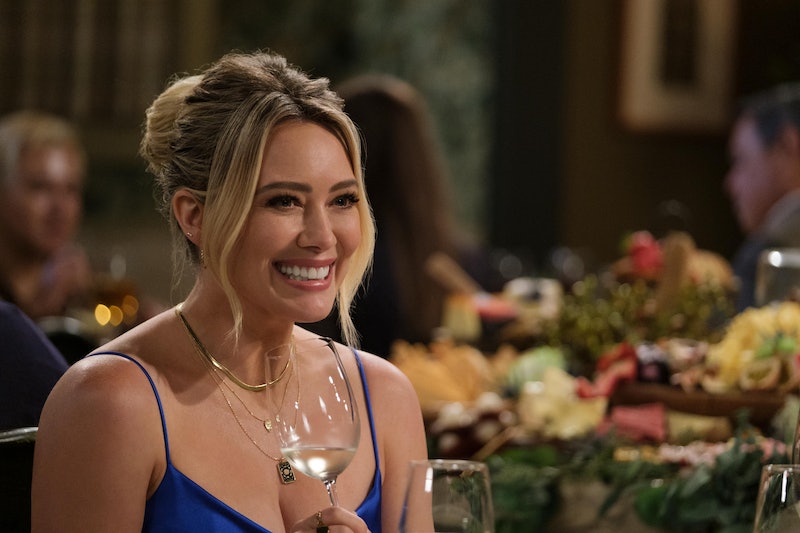 Whether you’re fans of the original How I Met Your Mother series or think Hilary Duff’s Hulu sequel is the Lizzie McGuire reboot you deserve, you’re in luck. On Feb. 15, Hulu announced that How I Met Your Father will return for Season 2. The streaming platform even doubled the number of episodes for the next season from 10 to 20, leaving fans with plenty of time to guess who Sophie (Duff) ends up with.

Writers and showrunners Isaac Aptaker and Elizabeth Berger, who also wrote the original, are returning to helm the next season. The same producers from the original are also on board, with Carter Bays, Craig Thomas, Pam Fryman, and Adam Londy returning. Though the first season is still underway (there are a few episodes left to air), here’s everything to know about How I Met Your Father Season 2, including what to expect from the cast and whether we’ll be seeing more men in Sophie’s life.

Similar to its predecessor, the sequel is narrated by future Sophie (Sex and the City’s Kim Cattrall) as she recounts how she met her son’s dad in 2022. Each episode follows young Sophie’s dating (mis)adventures with her New York crew: Jesse (Chris Lowell), a musician dealing with recent heartbreak who may or may not have a thing for Sophie; Ellen (Tien Tran), a divorcée and Jesse’s little sister; Sid (Suraj Sharma), a bar owner in a long-distance relationship with his surgeon fiancée Hannah (Ashley Reyes); and Valentina (Francia Raísa), Sophie’s BFF whose boyfriend, Charlie (Tom Ainsley), moved from the UK to follow her to New York.

During the premiere episode last Jan. 18, fans learned that Sophie meets her future husband during the night depicted onscreen, at Sid and Hannah’s engagement party. Initially, fans assumed the father would likely be one of the core group of friends, but that was before Josh Peck’s character was introduced later in the series as someone Sophie also met that night.

Halfway through the first season, all of them are already making strides romantically. The ever-optimistic Sophie started dating Drew (Peck), an elementary school vice-principal. Siblings Jesse and Ellen have begun putting themselves back out there and seeing new people. Newly-engaged couple Sid and Hannah are finally in the same city (for the time being), and the typically aloof and commitment-averse Valentina confessed she loves Charlie.

For the next season, it’s safe to assume the show will still be following the core group’s lives and romances and will likely be introducing even more characters Sophie met off-screen that first night. The guesswork continues.

The Season 1 core cast — Duff, Lowell, Sharma, Raísa, Ainsley, and Tran — is expected to return, and there will likely be more surprise guest stars come Season 2. That brief and barely-recognizable Leighton Meester cameo as Jesse’s ex-girlfriend who rejects his proposal during Episode 1? Maybe she finally returns to add drama to Jesse’s arc.

Considering Season 1 hasn’t even finished yet and Season 2 was just announced, a premiere date is some time away. Season 1 was first confirmed in April 2021 and premiered in January 2022 after four months of production, so you might be able to expect a similar turnaround time for Season 2.

This post will be updated as more information on HIMYF Season 2 becomes available.

More like this
The First Trailer For 'That '90s Show' Includes So Many Nods To The Original Series
By Jack Irvin, Alyssa Lapid and Grace Wehniainen
Millie Gibson Still "Can’t Believe" She Was Cast As Doctor Who's Companion
By Brad Witter
The ‘Emily In Paris’ Season 3 Trailer Teases Major Career & Love Crossroads For Emily
By Bustle Staff
Khloé Kardashian’s Son Was Born A Week Before Anyone Realized
By Jake Viswanath
Get Even More From Bustle — Sign Up For The Newsletter