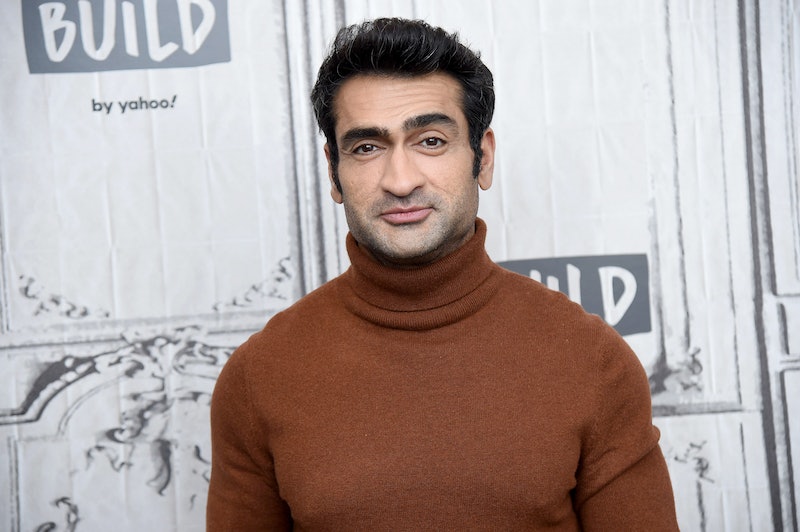 Kumail Nanjiani has tackled a variety of characters with seamless aplomb. The actor’s career took off after his stint as software engineer Dinesh Chugtai in the HBO comedy series Silicon Valley, and he’s since entertained audiences in other highly-regarded series and movies such as Community, Broad City, The Big Sick, and The Lovebirds. And he's not afraid to go outside of his comfort zone and fully embody his characters — just take a look at his Eternals transformation. Nanjiani's next surprising move involves tackling a character unlike any he’s portrayed before. The Marvel actor will play Somen “Steve” Banerjee, the Indian-American founder of Chippendales, in Hulu’s forthcoming limited series Immigrant. Here’s a look at the story behind the show, who’s in the cast, and when it’s scheduled for release.

Immigrant promises to show viewers a wild, “darkly comedic, crime-ridden story” of the now-famous male striptease dance troupe and how it was created by Banerjee. Deadline adds that Banerjee was wrapped up in a scheme that involved murdering producers, dancers, and choreographers who were hired to work for Chippendales. In 1994, the Los Angeles Times reported that the entrepreneur pleaded guilty in federal court to a “murder-for-hire charge” and admitted to targeting his television producer and business partner Nick De Noia in 1987. Not long before being sentenced to 26 years in prison, Banerjee died by suicide.

Last May, the only cast member announced was Nanjiani, who will star as Banerjee and co-executive produce Immigrant alongside his wife and longtime collaborator, Emily V. Gordon, and writer Robert Siegel. (You may also know Siegel as the writer of Hulu’s upcoming biographical miniseries Pam and Tommy, which stars Sebastian Stan as Mötley Crüe’s drummer and Lily James as the Baywatch actor.) On Oct. 26, more creatives signed on to the project. The White Tiger’s creator and director Ramin Bahrani and Girls co-producer Jenni Konner were tapped as the series’ director and co-showrunner, respectively, per a Deadline report.

Cast announcements are slowly trickling in. On Jan. 13, The Hollywood Reporter announced the pivotal role of De Noia had finally been cast. White Lotus’ Murray Bartlett will play the TV producer and choreographer who was assassinated in his Manhattan office. De Noia was Banerjee’s business partner/nemesis who, according to the THR report, transformed Chippendales “from a seedy male strip joint” to a “global juggernaut.” (The male strippers’ routines were De Noia’s works.) Nanjiani gave a warm welcome to his co-star on Twitter, reposting a news report and adding, “Very excited about this!”

Immigrant, which was ordered straight-to-series on May 18, includes eight episodes. Because it’s in the early stages of production, the Immigrant trailer and anticipated release date aren’t available just yet.

This post will be updated with the trailer, release date, and additional plot and cast details as more information on Immigrant becomes available.

More like this
Everything To Know About The 'Daisy Jones & The Six' TV Series
By Maxine Harrison and Brad Witter
'The Crown' Season 6 Has Suspended Filming "Out Of Respect" For The Queen's Death
By Bustle Staff
Here’s Why Danny Masterson’s Hyde Isn’t In 'That '90s Show'
By Brad Witter
Pamela Anderson’s Dating & Marriage History Could Be Its Own TV Series
By Jake Viswanath
Get Even More From Bustle — Sign Up For The Newsletter
From hair trends to relationship advice, our daily newsletter has everything you need to sound like a person who’s on TikTok, even if you aren’t.

This article was originally published on May 18, 2021