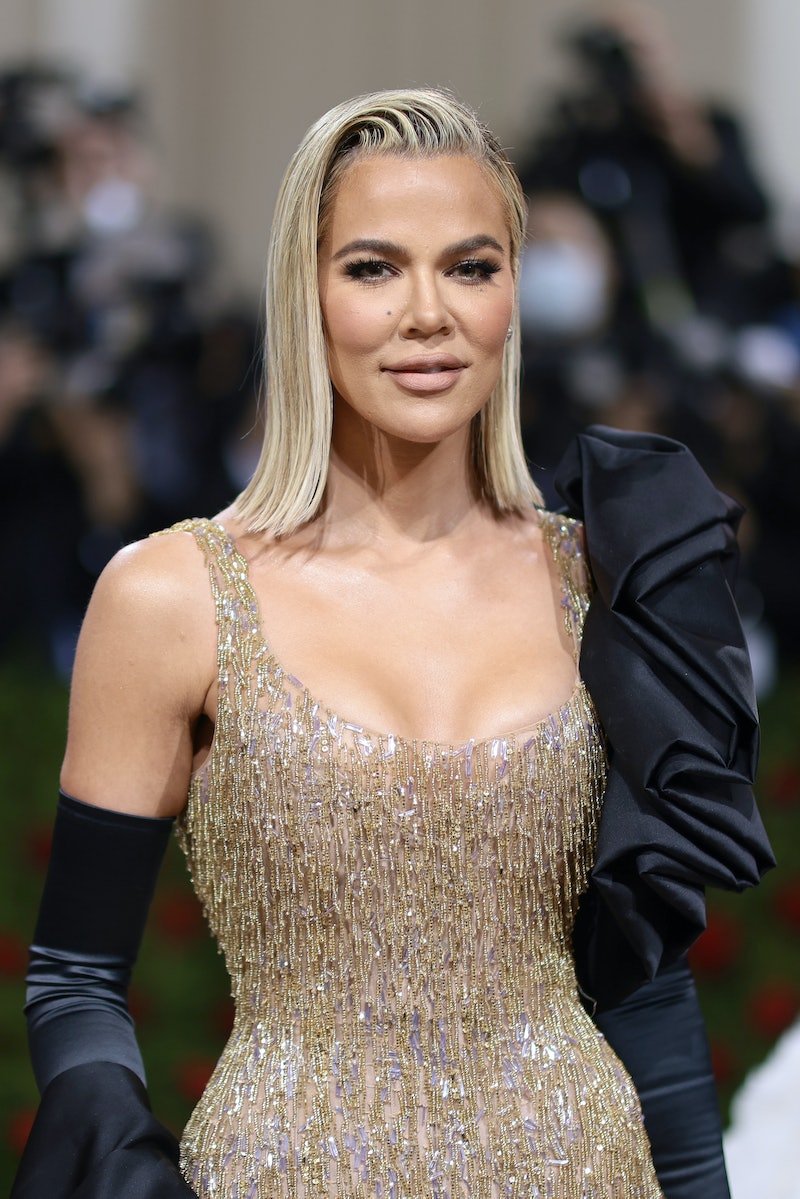 The Kardashian klan is known for many things — reality TV domination, beauty brands that sell out, and even unforgettable quotes. But another thing the Kardashians are known to do really well? Throw a party. The Kardashians hosted their annual Christmas Eve bash with a guest list of their closest friends. On their Instagram accounts, the family gave a look into the extravagant red-themed party with their glam outfits, a “My Snowman and Me” performance by North West, and even a See’s Candies kiosk.

Khloé Kardashian also gave her followers a little Christmas treat on Instagram by debuting her son’s face in the holiday photos she posted. Posing with her 4-year-old daughter True Thompson, the Good American founder can be seen carrying her nearly 5-month-old baby in a black onesie with his face peering at his mom. Though her son made his Instagram debut on Halloween when Khloé shared pictures of him being carried by his sister in his Tigger costume, this is the first time Khloé shared pictures of her son’s face.

Khloé welcomed her second child with ex-boyfriend NBA player Tristan Thompson on July 28, 2022. The deliver room moment was shown on the Season 2 premiere of The Kardashians. Save for these little snippets of her life with her newborn, the 38-year-old mom-of-two has been keeping her son from the camera and has yet to reveal his name. It’s a move the KarJenners are known for. Though everyone knows and loves Kylie Jenner’s first-born Stormi, the Kylie Cosmetics founder has also been shielding her second child with Travis Scott from the public eye. And though Kylie originally named her son Wolf, they are considering legally changing his name, which is yet to be revealed either. Similar to Stormi, True, meanwhile, has been a staple on Kardashian’s Instagram and on the family’s reality show.

Khloé’s son was conceived via surrogate in November 2021, before word of Thompson’s infidelity and paternity scandal with fitness model Maralee Nichols broke. It was confirmed via a DNA test in January 2022 that he fathered a child with Nichols.

While Khloé and the Chicago Bulls player were almost engaged at some point (Thompson proposed to Khloé, but she rejected the proposal. The couple’s on-again, off-again relationship officially ended in June 2021. Despite their split, the athlete reportedly agreed to be the sperm donor for the surrogate, and despite the many controversies surrounding their relationship, Khloé called her son “a beautiful gift” in the premiere episode of The Kardashians. “I am so grateful,” she added.

Aside from Khloé’s pictures with True and her baby, the rest of the family also shared more pictures. Kim Kardashian shared her own family pics with her four children, North, 9, Saint, 7, Chicago, 4, and Psalm, 3. The Skims founder wore a bedazzled silver gown while her kids were all in black and dark grey.

Kim also shared more pictures with her mom, sisters, and nieces and nephews.