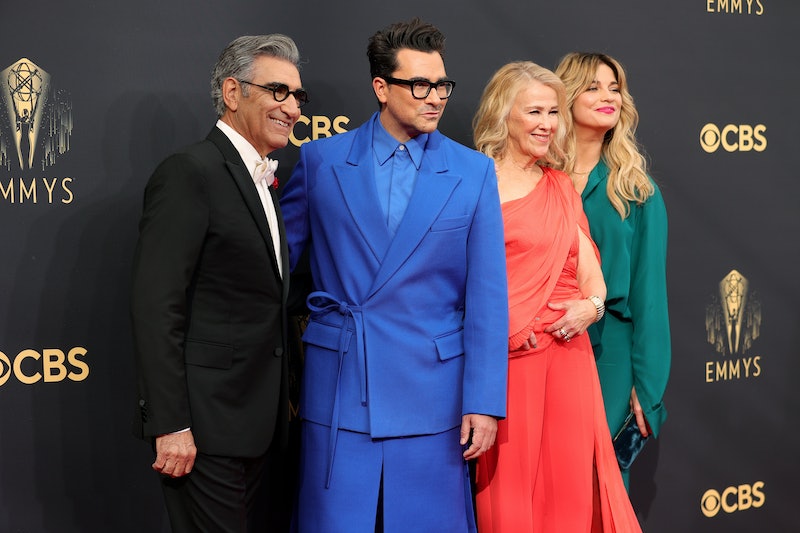 Schitt’s Creek may have completed filming in 2020 and moved from Netflix to Hulu starting Oct. 3, but its impact will surely be felt on TV and throughout the comedy world for years to come. It has become a comfort watch like Friends or The Office, and has increased the net worths of the actors playing the fictitious Rose family members. Two of the four stars of the show were already well-known actors before the program began airing on PopTV (and Netflix), as both Eugene Levy and Catherine O’Hara had won major awards and become near-household names due to past roles (and perhaps even more as Johnny and Moira Rose). The series did kickstart the careers of the younger two of the Rose clan, with both Dan Levy and Annie Murphy rocketing to stardom thanks to its brilliance.

In addition to making them all highly sought-after actors and Emmy award winners, Schitt’s Creek also helped ensure all four stars became wealthy, with two earning their first real paychecks from the show. Despite the show ending, the actors remain active in the entertainment world, with no sign of slowing down. Dan Levy will be joining Sex Education, while Annie Murphy stars in the series Kevin Can F**k Himself.

So, how much are the stars of Schitt’s Creek really worth? Read on to find out.

What Is Eugene Levy’s Net Worth?

From the beginning, Schitt’s Creek was a family affair, as it was co-created and co-produced by the father-and-son duo Eugene and Dan Levy. The two brought both the program and their characters to life, and they were paid handsomely for their efforts.

Unlike his son, however, the elder Levy’s fortune (reported to be around $30 million, according to Celebrity Net Worth) doesn’t mainly come from one show. He has been a working comedic actor for decades, and long before there was a Schitt’s Creek (long before there was a Dan, actually), he was already an icon.

Since the ’70s, Levy has appeared in dozens of films and TV shows, with the highlights of his career including such well-known titles as Waiting for Guffman, Father of the Bride (and its sequel), Best in Show, Finding Dory, Hiller and Diller, Greg the Bunny and perhaps most notably, the American Pie series. He is so crucial to that franchise he has now scored a role in eight of the nine films. Yes, there are nine American Pie movies.

Levy won his first Emmy in the early ’80s for his writing talents on SCTV Network 90. He then went on to double his number of trophies by eventually claiming both Outstanding Lead Actor in a Comedy Series and Outstanding Comedy Series (as a producer) in 2020 for Schitt’s Creek. Somewhat surprisingly, Levy also has a Grammy, which he won for co-writing a song for A Mighty Wind.

Most recently, Levy can be seen in Capital One commercials, sometimes with his IRL daughter Sarah Levy.

What Is Dan Levy’s Net Worth?

Dan Levy’s net worth may appear particularly large, especially when compared to his co-star Annie Murphy, but it all begins to make sense when his full role is explained. While Murphy was just one of the four main talents in the program, Levy developed Schitt’s Creek, co-produced the series, and co-wrote and at times even directed episodes. He was paid a higher salary because he was involved with every aspect of the sitcom, from start to finish.

Before Schitt’s Creek, Levy was working, though he hadn’t really popped yet. He found some acting, hosting, and writing gigs, but none of them will be remembered like the funnyman’s big break on the small screen.

Since Schitt’s Creek wrapped, Levy has appeared most notably in Hulu’s LGBTQ-focused holiday film Happiest Season, which was welcomed warmly when it arrived in time for Christmas 2020. He will also appear in the fourth season of Sex Education.

What Is Catherine O’Hara’s Net Worth?

Like Eugene Levy, Catherine O’Hara has amassed a sizable bank account thanks to her decades as a beloved comedy actress, and she has the filmography and awards to prove just how talented she is.

Of all the four main actors in Schitt’s Creek, O’Hara may be the most recognizable, as she has landed a number of roles throughout the years that are simply unforgettable. She has worked consistently with a number of directors, including Christopher Guest (on films like Waiting For Guffman, A Mighty Wind, and Best In Show) and Tim Burton (on projects such as Beetlejuice, The Nightmare Before Christmas, and Frankenweenie) as well as other beloved titles like Home Alone and its sequel.

O’Hara earned two consecutive Emmy nominations for her turn as Moira Rose on Schitt’s Creek, for the last two seasons. Like the rest of her co-stars, she finally claimed the prize on her last chance in what turned out to be a clean sweep for the program. Decades prior, she took home the Outstanding Writing for a Variety Series Emmy for her work on SCTV Network 90, just as the elder Levy did. The two have worked together for a long time, and their only Emmy wins are for jobs they had together, separated by decades.

Most recently, O’Hara has appeared in Chase commercials and has had several voice-acting gigs, including the TV series Central Park and the animated film Extinct.

What Is Annie Murphy’s Net Worth?

Annie Murphy’s story is one that almost wasn’t told. Before she landed the role of a lifetime on Schitt’s Creek, she was essentially bankrupt. During an appearance on The Kelly Clarkson Show, the actress revealed that at one point, her house burned down and she had, according to her, $3 in the bank. She even considered giving up what she loved most, telling the pop star host, “I found myself crying in the Pacific Ocean, a very snotty cry, and the universe was like, ‘Don’t do this anymore. This is not for you.’”

Thankfully, she didn’t abandon her calling, and she went on to incredible success playing Alexis Rose, the self-absorbed daughter who has to find how to exist in the real world (read: make money for herself). While it got off to something of a rocky start, Schitt’s Creek eventually found its footing, thanks in large part to its adoption by Netflix.

The show ended up running for six seasons, with 80 episodes airing in all. For her performance in the last block of stories, Murphy earned her first Emmy nomination, and she went on to collect the Outstanding Supporting Actress in a Comedy Series prize in 2020.

Since leaving Schitt’s Creek, Murphy hasn’t had a hard time finding work (though she has faced other difficulties), as she is now in high demand in the comedy world. She currently stars in Kevin Can F**k Himself, and became a member of the cast of Netflix’s Russian Doll.