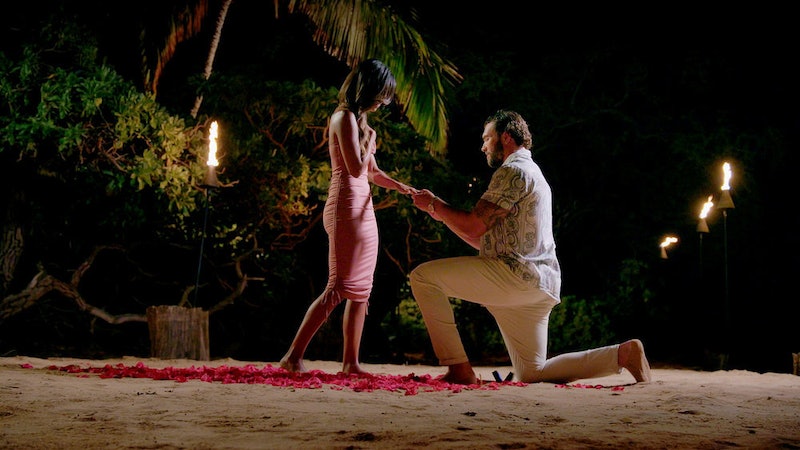 Temptation Island may not have the best success rate when it comes to getting couples to stay together, but host Mark L. Walberg still trusts the process. “When you look at Temptation Island, it seems to be the most outrageous and ridiculous concept. But it’s actually this very real experience,” he explained to TV Insider last year. “I always remind people they are not competing for a million dollars or a dream vacation. The outcome is they are either going to stay together or not. There is no other prize other than that.”

According to Walberg, that’s “what separates” the USA reality series from other dating shows. “The experience is as extreme as the concept is, but it boils down to some relatable questions everybody asks [in their relationships]. They’re universal. I love the other shows. They are fun, but this one really becomes a very introspective life journey,” he said.

Alas, those journeys tend to end with more breakups than anything else. As of 2022, it seems that only four couples who appeared on the rebooted version of the show are still together. Here’s where everyone stands now.

Though Javen and Shari got engaged during the Temptation Island Season 1 finale, they haven’t yet tied the knot. “I like my fiancé phase,” Javen told AfterBuzz TV in November 2021, adding that he feels like he’s “maturing still” and that he and Shari will walk down the aisle when the time is right. Shari added that they were “only 27” at the time of the interview and had mutually decided that they wanted to wait until they were 30 to get married. “I know for other people, it might not make sense, but for us, it makes sense,” she said. Though the couple’s respective Instagrams are now set to private, Javen referred to Shari as his fiancée in a February 2022 tweet. Shari also tweeted on March 10 that “being in a relationship with the right person is the best feeling.”

Though Evan went on Temptation Island with his high school sweetheart, Kaci Campbell, in Season 1, he left the show with single Morgan in 2019. By April 2020, however, the pair had split, ending their engagement after a year together. “He didn’t work the entire time that he lived with me for almost a year and a half. I supported him financially, and his excuse for abruptly leaving two days before we were supposed to move to L.A. was that he needed to go ‘work’ to be able to pay me back,” Morgan told Us Weekly, also alleging that Evan had lied to and cheated on her. “He said he wanted to feel like a man, kinda blaming me for him not doing anything with his life. It didn’t make any sense to me.”

After two years of dating, Karl and Nicole broke up and left Temptation Island’s first season single. A year later, the Chicago-based couple got back together and even adopted a dog named Kobe together. But they later split again. Though they never formally announced a breakup, Karl confirmed in a September 2021 Instagram story that he was single. Nicole, for her part, tweeted in February 2022 that she was “single & ready to mingle,” asking fans to vote for her on an online dating show. The two also no longer follow each other on Instagram.

After a rollercoaster Season 2, David chose to leave the island with single Toneata Morgan instead of his girlfriend Kate. However, David broke up with Toneata after filming wrapped and got back together with Kate. “After letting you into a small glimpse of my life in an unrealistic & inorganic environment on Temptation Island, I’ve decided I owe no one answers as to decisions that I’ve made AFTER cameras stopped rolling, REAL life resumed, time & space WERE taken, and REAL conversations were had between David and I,” Kate captioned a set of since-deleted Instagram photos in December 2019 announcing their reconciliation. But the rekindled romance didn’t last, and according to her Instagram posts, Kate is now in a relationship with a new man.

Though Esonica expected to leave Temptation Island Season 2 still with her boyfriend Gavin Rocker, she ended up with former basketball player Kareem Thomas instead. However, it appears that Esonica and Kareem broke up after the show, as multiple outlets have referred to them as single and there doesn’t appear to be any social media evidence that they’re together — or dating anyone else for that matter.

Season 3 couple Chelsea and Thomas have been going strong ever since they left the island together. Though Thomas is not particularly active on Instagram, he shared a pic of he and Chelsea sailing in August 2021, followed by a “photo dump” from their January 2022 trip to Solvang, California, which he noted was a Christmas gift from Chelsea. “This town is too beautiful for words. Thank you babe,” Thomas captioned the Jan. 20 post. Later that month, he shared a brief video from their getaway reminding followers to not “forget to make memories.” Chelsea also shared a couple selfie with Thomas on Jan. 19, writing that she “never [wanted] to leave” Solvang. As of publication, the couple’s most recent Instagram photo together was posted in May 2022.

In a series of ups and downs, Erin and Corey left Season 3 together, broke up during the reunion special, and then later revealed on Instagram that they’d reconciled. However, the photos they posted together after the show have disappeared, and fans have speculated that they’re no longer together. Erin’s Instagram is currently set to private, and the most recent post on Corey’s grid is from March 2021, so their relationship status isn’t definitive. One telling clue, though: They no longer follow each other on social media.

After getting engaged at the final bonfire in Season 3, Kristen and Julian revealed during the reunion special that they’d set a wedding date of July 24, 2022. According to the New Jersey-based couple’s recent Instagram posts, they’re still on track for their summer wedding after celebrating 12 years of dating last July. “In all 12 chapters of our story, I think chapter 13 is going to be the best one yet!” Kristen captioned an October 2021 Instagram post including some of their engagement photos. Julian also shared pictures from the shoot on Oct. 30, noting that it had been one year since he popped the question: “365 days later and my love for you continues to grow even stronger with each passing day!”

In a last-minute change of heart, Edgar chose to leave Temptation Island with Marissa, rather than his college sweetheart Gillian Lieberman. Though Edgar and Marissa seemed to have a genuine connection, he couldn’t forgive himself for cheating on Gillian and “felt completely destroyed” after filming wrapped. As such, he and Marissa only talked “on and off,” post-filming. Explaining on the Season 4 reunion that Marissa still “does mean a lot” to him, he added that he also knows he “can’t handle a relationship right now” and is currently single. Marissa, for her part, explained that “it just sucks that it’s over,” but she nonetheless had a “really great experience” with Edgar.

During his final Season 4 bonfire, Lascelles chose Trace over girlfriend of seven years Ashley Rodriguez. Shortly after filming wrapped, however, Lascelles hooked up with two of the island’s singles, Alexa Coppola and Meghan Pilkington, at a club on the same night in October 2021 — a bombshell that was revealed during the reunion. Then, he visited Trace in California for the first time in November, but their “chemistry wasn’t the same as it was on the island,” and so they decided to just be friends. That status of their friendship might have changed following the reveal that Lascelles made out with Alexa and Meghan, though. Explaining that she was shaking because she was “so pissed,” Trace said that she was “disgusted” by Lascelles’ actions, which he later chalked up to him being “under the influence” and claimed he did not initiate.

Despite plenty of ups and downs throughout the season, Luke and Iris were the only couple to get engaged during the Season 4 finale. “You’ve shown me so much love since the beginning,” Luke told his girlfriend of four years during his post-bonfire proposal. “You’ve been the sweetest, most patient, amazing woman that I’ve ever met. And I don’t know what else to say but... I want you to be my girl forever and ever. Would you make me the luckiest man in the world?” During the reunion, Iris shared that they haven’t set a wedding date, but are hoping to get married in Santorini, Greece, in two years.

This article was originally published on March 16, 2022