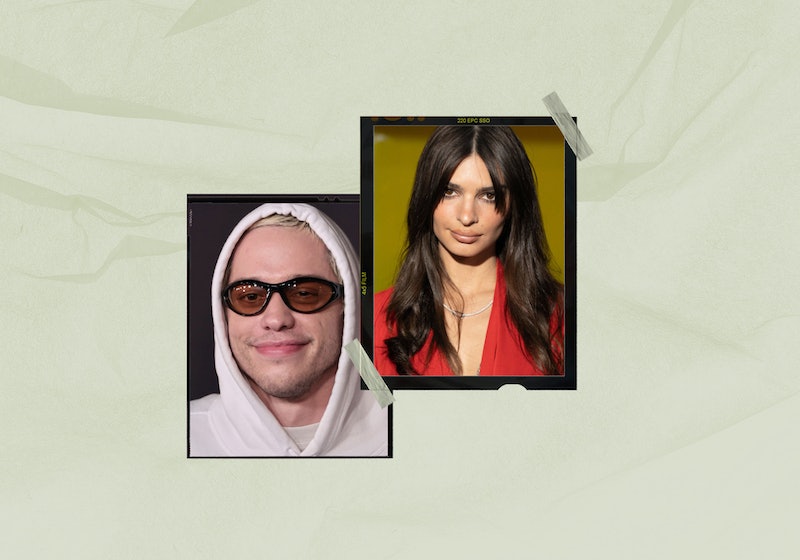 There appears to be a new A-list item in town, and to the shock of absolutely no one, this blossoming relationship involves Saturday Night Live alum and notorious Hollywood bachelor Pete Davidson. He’s reportedly been spending time with model/actor/author Emily Ratajkowski, and, purportedly, the stars seem smitten already. Us Weekly reported that the pair are “casually dating,” and they were photographed celebrating Davidson’s 29th birthday together on Nov. 17.

Both Davidson and Ratajkowski endured high-profile breakups this summer — EmRata and husband Sebastian Bear-McClerd reportedly separated in July, while Davidson split with girlfriend Kim Kardashian in August — but these two freshly-single stars are testing out the dating pool waters again, just in time for cuffing season. Naturally, as an astrologer, I was eager to dive into the potential couple’s synastry for a little more insight into the planetary dynamics at play. (Side note: Synastry is a practice that involves analyzing the astrological compatibility between two birth charts.)

Ratajkowski and Davidson’s exact birth times are unconfirmed, which means we can’t be certain of their rising signs or identify which houses of the birth chart their natal planets fall into. However, by using their birth dates and locations, we can still put together a clear astrological picture of their major planetary placements — which allows us to thoroughly examine the cosmic alignments at play within this fresh and flirtatious connection.

Will this budding romance have long-term potential, or does it have rebound written all over it? Read on for a dive into the astrological compatibility between Ratajkowski and Davidson.

Ratajkowski (born June 7, 1991) is a chatty and curious Gemini, while Davidson (born Nov. 16, 1993) is a mysterious and brooding Scorpio. While all sun signs can find common ground with one another, the compatibility between Gemini and Scorpio isn’t always the easiest. Airy Geminis are extroverted social butterflies who love to flit from one thought or conversation to the next, but watery Scorpios tend to be more private and introspective, preferring to play their cards closer to their chest. This dynamic is magnified by the fact that Davidson has an entire stellium of planets in Scorpio in his chart — the sun, Mercury, Venus, Jupiter, and Pluto are all clustered together in this powerful and secretive sign, giving him a plethora of Scorpio zodiac traits that may not always jive with Ratajkowski’s lighthearted and mutable Gemini sun.

In both Ratajkowski and Davidson’s charts, their Mercury signs mirror their sun signs — so the Gemini-Scorpio dynamic is reflected in their communication styles, too. This is because Mercury rules the way we think, process information, and express our ideas. Ratajowski’s intellectual and open-book Gemini zodiac qualities could clash with Davidson’s dark sense of humor and emotion-heavy Scorpio vibe. However, in an interview with Variety, Ratajkowski said she enjoys “vulnerability and radical honesty” — which could make someone with a pile-up of Scorpio placements like Davidson a desirable fit to her tastes.

While their zodiacal differences are aplenty, that doesn’t mean they won’t appreciate one another’s strengths. “Pete makes Emily laugh and he loves how intelligent she is,” a source shared with Us Weekly. It makes sense that Ratajkowski’s cerebral Gemini influence could be captivating to Davidson’s deep-feeling Scorpio self, and that his dark and self-deprecating comedy style would tickle her quick-witted Gemini sense of humor.

Square aspects in astrology are considered one of the most challenging connections that two planets can make to one another, and Ratajkowski and Davidson’s combined charts are full of them. Many of the squares in the pair’s synastry happen to involve Venus, the planet of love and romance, so tensions are likely to arise when it comes to their values and relationship styles. Davidson’s intense Venus in Scorpio conflicts with EmRata’s flashy Venus in Leo, which means these two are probably very different in the way they show and want to receive affection. To make things more challenging, Ratajowski’s Jupiter, Mars, and Saturn are all squaring Davidson’s Venus, too. Relationship challenges and confrontations could build over time, and once the honeymoon phase is over, there could be a reality check.

Ultimately, squares don’t have to be a bad thing when it comes to astrological compatibility. In fact, these edgy aspects can also inspire one to take action, stir up some excitement in relationships, and facilitate the growth of both parties. Ratajkowski and Davidson will certainly need to find solutions to the roadblocks and frustrations that pop up, but if their hearts are really in it, they could very well make it work.

Saved By Some Steamy Mars Chemistry

There may be some challenging aspects in Ratajkowski and Davidson’s synastry, but there’s one thing that could lighten the load: Their physical chemistry appears to be off the charts, thanks to some steamy connections involving the virile planet Mars. Mars rules sex, action, and carnal instincts, and both Ratajkowski and Davidson have theirs in hot and passionate fire signs. EmRata’s sexy Mars in Leo and Davidson’s adventurous Mars in Sagittarius are forming a near-perfect trine aspect — one of the luckiest and most harmonious connections two planets can make. This supercharges the pair’s sexual chemistry and physical attraction to one another, and also makes them ultra-supportive of each other’s goals and passions.

The pair’s charts boast yet another gorgeously steamy trine aspect, this one between Davidson’s Mars and Ratajkowski’s Venus in Leo. Venus and Mars are considered the love planets in astrology, so this meaningful connection really boosts the duo’s romantic compatibility and helps to offset the tension of their Venus-Venus square. With the cosmic lovers harmonizing this way in their charts, there’s likely an irresistibly lusty allure and loads of passion within their bond. While this ultra-sexy spark isn’t necessarily enough to carry a relationship into longevity, it’s sure to be passionate and fun.

Both Ratajkowski and Davidson were born with the tough-love planet Saturn in Aquarius, meaning the two of them are currently experiencing the turbulent life lessons of their Saturn return periods, and have been since 2020. Everyone’s first Saturn return occurs during their late 20s, and this cosmic rite of passage serves up tons of heavy growth experiences and pivotal life changes that help us to mature and take responsibility for ourselves. Ratajkowski has experienced some massive shifts and milestones during her Saturn return — including becoming a mother, authoring the NYT bestselling book My Body, and going through a divorce. Davidson’s had his fair share of life-changing events during his Saturn return, too, including co-writing and starring in semi-autobiographical film The King Of Staten Island, moving out of his mother’s house into his own place, and having numerous high-profile romantic relationships. With that in mind, they may be able to relate to each other and bond over their many triumphs, tribulations, and personal development.

As Ratajkowski and Davidson simultaneously approach the end of their tumultuous Saturn return periods, they’ll glean more insight into the shake-ups and shifts that have taken place over their lives in recent years. If they can weather these coming months together, both stars will likely have a clearer idea about what they want out of a relationship and whether they’re interested in pursuing something serious.

If Ratajkowski and Davidson want a lasting relationship, they have their work cut out for them. Their cosmic incompatibilities combined with the multitude of tough square aspects between their personal planets could make it difficult to fully connect or see eye-to-eye. In spite of that, their spicy Mars connections denote steamy sexual and romantic chemistry that could carry them pretty far — and their shared Saturn return experiences could provide a meaningful base for bonding.

More like this
Are Sagittarius & Aquarius Compatible In A Relationship? Astrologers Weigh In
By Kristine Fellizar
Phoebe Bridgers & Paul Mescal's Zodiac Signs Make So Much Sense Together
By Brittany Beringer
Are Sagittarius & Sagittarius A Good Match? Astrologers Weigh In
By Kristine Fellizar
Here's Your Horoscope For December 2022
By Alexandria Lettman
Get Even More From Bustle — Sign Up For The Newsletter