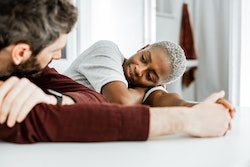 A Leo-Capricorn relationship could be compared to an A-list celeb and a tech billionaire getting together. Fiery Leo is the zodiac’s show-stopping lion, while earthy Capricorn is the zodiac’s hard-working goat. Together, these two totally have what it takes to become the ultimate power couple — take famous Capricorn Michelle Obama and her Leo husband Barack Obama, for instance — but making a relationship work initially could prove to be quite a challenge due to their core differences. Leo and Capricorn’s compatibility illustrates the challenges this fire and earth sign pair need to overcome in order to make a relationship last.

As astrologer Jacq Dowling tells Bustle, Leo is the fixed fire sign, which means they’re highly passionate, driven, and a bit on the stubborn side. Once they have their heart set on someone, they’ll do everything they can to keep them. In true fire sign fashion, they tend to fall in love pretty quickly. Capricorn, on the other hand, is cardinal earth. They’re very practical, grounded, and don’t mind taking initiative. They’re ruled by Saturn, which is the planet of limitations and restrictions, so they’re all about structure, discipline, and achieving their goals. Their ambition can occasionally take priority over everything else. However, Capricorns are very emotionally intelligent; Capricorn’s personality often includes a great sense of humor, and a strong sense of loyalty to those they choose to invest in.

“Leos might initially be attracted to a Capricorn’s status, while Capricorns could use some of Leo’s fire to let loose and not take life so seriously,” Dowling says. “Both Leo and Capricorn are down to commit. As long as the Capricorn is feeding the Leo’s fire with passion and adoration, and the Leo can be the cheerleader for the Capricorn to achieve their goals, this is a pair that can go the distance.”

Sexually, Leo and Capricorn’s compatibility is a bit of a mixed bag. According to astrologer Stina Garbis, Leo tends to be a little wild and is excited by anything taboo. “They love drama and like to play head games. Like the other fire signs, there can be an intense build up until they let it all out in the bedroom,” she says. They can be the type of lovers who hook up and feel nothing at all, or the type to take their time worshipping their partner’s body.

Capricorn is more traditional when it comes to sex. They tend to prefer relationships over casual flings. They enjoy their routine and can be a little closed off during intimacy. But once they fully trust their partner, they’ll be more willing to leave their comfort zone and let out their sensual side.

If Leo and Capricorn were to have a one-night stand, chances are, they would never speak to each other again. They move at different paces, and Capricorn may come off as cold to the lion. If they’re in a relationship, this can be a pretty good match. According to Dowling, Capricorn will love how giving Leo is with their love and affection, while Leo will appreciate Capricorn’s sexual stamina.

Emotionally, these two can be a tough match as they’re very different. As a fire sign, Leo has no problem expressing how they truly feel. Whether they’re happy or sad, Leo will let their partner know, sometimes in a way that draws on their flair for the dramatic. They’d have no problem, for example, making a scene over something super trivial in the middle of a quiet restaurant. In love, however, they’re very warm, affectionate, and can’t resist a grand romantic gesture.

Capricorn isn’t like that at all. Because they’re Saturn-ruled, they tend to be more reserved with their emotions. Regardless of how they’re feeling during arguments, they have the ability to sidestep their emotions in order to effectively problem solve. For Leo, this can be both a good and bad thing. Leo will appreciate their partner’s ability to resolve issues, but they may be put off by how unfeeling Capricorn can be.

Unlike Leo, who’s very affectionate, Capricorn is not the type of partner to say “I love you” randomly. Instead, they’ll show love through acts of service or gifts. While Leo won’t mind the gift-giving, they may not get enough verbal reassurance to feel truly secure in the relationship.

There is, however, a plus side to their differing emotional approaches. According to Dowling, Capricorn is very patient and will give Leo the space they need to express themselves when needed. Leo just needs to be mindful to not do it when Capricorn’s in the middle of work.

Leo and Capricorn make an interesting pair in dating because they have the makings of a power couple, yet they’re not exactly a match made in heaven. According to Garbis, both signs want fame and fortune, but go about it differently. “Where Capricorn believes they can reach stardom through hard work, Leo believes they can find fame with their charismatic ways,” she says. Capricorn is also much more serious than the fun-loving Leo. There’s a chance these two may drive each other crazy while dating.

However, if they learn to accept and appreciate each other for who they are, this can be a well-balanced relationship as each partner brings to the table qualities the other lacks. “Leo can add sparkle to their partner’s life and Capricorn can keep Leo down to earth,” Garbis says. “This can either be a very transformative relationship where they both grow or they may be too different to get along.”

Leo and Capricorn’s compatibility for friendship is higher than their romantic compatibility, but their personality differences are still an issue they’ll have to work through. Leo is much more fun-loving than Capricorn, who takes their responsibilities very seriously. Leo may want Capricorn to lighten up, while Capricorn need Leo to be more realistic with their life, Garbis says.

If they don’t criticize each other’s ways, they can have a pretty solid friendship that lasts, as both signs are generous, loyal, and dependable. They also love taking care of their loved ones. Leo will make sure Capricorn gets enough breaks so they don’t burn out, while Capricorn will always be there to help Leo find solutions to problems they’re having.

When it comes to communication, it may take some time and patience for Leo and Capricorn to understand each other. Leos speak in a way that’s warm, friendly and inviting, while Capricorns tend to be direct and down-to-business. “Capricorn’s serious demeanor may injure Leo’s sense of pride,” Garbis says. Leos want to feel adored, they don’t want to feel like they have to win over someone’s love. Capricorn’s sometimes cold way of speaking won’t do anything to reassure Leo that they’re in the right relationship.

The way they argue and solve problems can also become an issue in the relationship. Leo is very passionate and have a tendency to be a little dramatic, while Capricorns are practical and want to solve problems logically. Leo may feel like Capricorn doesn’t care about their feelings, while Capricorn may feel frustrated at Leo’s theatrics. “These two may never see eye to eye,” Garbis says.

Potential Problems In A Leo-Capricorn Relationship

Leo is ruled by the Sun, which represents the self in astrology. Because of this, they really enjoy being the center of attention and can be, well, a bit selfish. As you can imagine, being the focal point of their partner’s world isn’t likely to happen with Capricorn.

Capricorn has a reputation for being the workaholic of the zodiac. They don’t let anything get in the way of achieving their goals. If they’re in the middle of a big project, their partner might not hear from them for weeks until it’s finished. In general, career and money rank first in terms of Capricorn’s priorities, and everything else just falls to the side.

A lack of time spent together can become a big issue for Leo who needs a lot of attention in relationships to feel secure and fulfilled. If Capricorn doesn’t give that to them, there’s a chance this relationship isn’t going to last very long.

Are Leo & Capricorn A Good Match?

Overall, Leo and Capricorn are considered to be an incompatible zodiac match. They’re just very different, and will have a tough time getting a relationship off the ground. However, no relationship is doomed to fail. It may take a bit of work to make their partnership last, but anything is possible.

More like this
Libra & Aquarius Can Be Great Together, As Long As They Do One Thing
By Kristine Fellizar
Think Your Partner Is Cheating? These Tarot Cards May Confirm Your Suspicions
By Kristine Fellizar
Here’s Why Sagittarians Should Pursue A Career In Academia
By Nina Kahn
These 4 Zodiac Signs Will Be Extra Lucky In October
By Brittany Beringer
Get Even More From Bustle — Sign Up For The Newsletter