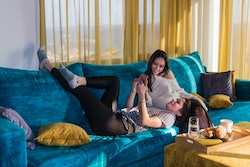 When it comes to love, Scorpio and Pisces are two zodiac signs who can get very intense, very quickly. They’re deeply emotional Water signs who long to find that soulmate type of bond. When these two finally cross paths, sparks are sure to fly. Scorpio and Pisces’ zodiac compatibility has everything you need to know about this Water sign couple.

“These are two signs who burn for each other,” astrologer Clarisse Monahan tells Bustle. “They both are of the element of water, an element naturally in sync with feeling.”

When Scorpio and Pisces first meet, they’ll have an intuitive and almost “otherworldly” rapport. “Each senses something ineffable in the other and they long to find out more,” Monahan says. Since they’re Water signs, they tend to follow their heart. If they feel like they sense something special in the other, they won’t pause to think things through. Scorpio and Pisces could be all-in from day one.

These two signs trine each other in astrology, meaning they form a 120-degree angle to one another. According to Monahan, a trine in astrology is equivalent to Jupiter energy. “This means [they bring each other] harmony, luck, expansiveness and much joy.” Keep reading to learn more about a Scorpio and Pisces relationship.

Sexually, Scorpio and Pisces make a “beautiful” couple. “They love to give and merge with each other,” Stina Garbis, professional astrologer and psychic, tells Bustle. “Scorpio and Pisces find emotional release through sex and they may increase their bonds through their lovemaking.” This is not something they can find with other zodiac signs, so they’ll always view their relationship as special regardless of how it turns out.

If they establish a strong connection early on, their sex life will be amazing. According to Monahan, “Scorpio is one of the zodiac’s most potent signs and Pisces is the most imaginative. With Pisces' imagination and Scorpio's brooding passion, together they create a lot of steaminess.” It’s a relationship that’s both physically and emotionally fulfilling for each of them.

Since they’re both Water signs, Scorpio and Pisces are both in tune with their emotions. Because of that, they’ll be very understanding of each other’s intensity and mood fluctuations. “Scorpio being [a fixed Water sign] has intense and sometimes overbearing emotions that may verge on jealousy or fear of betrayal, while Pisces [a mutable Water sign] is more tender,” Garbis says. “Pisces can find intense love with Scorpio, and may even soothe their soul, and Scorpio gives Pisces the attention they crave.”

The only real issue that is Scorpio is a little more guarded than Pisces. “Scorpios don’t give up their emotions easily, they make you work for them,” says Monahan. Pisces will wait if they feel like it’ll be worth it in the end. With Scorpio, they’ll have no problem being patient. Once Scorpio fully trusts that Pisces is just as invested in the relationship as they are, Scorpio will be immensely loyal.

The Biggest Potential Problem Area In A Scorpio-Pisces Relationship

Scorpio is ruled by Mars, which is the planet of aggression, and that can influence their personality and how they respond to certain situations. Pisces, on the other hand, as a mutable Water sign, which means they’re changeable and impressionable. If Scorpio says something the wrong way, Pisces will take this personally and may shut their partner out.

Pisces is also ruled by expansive, happy-go-lucky Jupiter, which “encourages a dissolution of boundaries,” while the more private Scorpio needs structure. “Scorpio may find Pisces too much and too inconsistent, and Pisces may find Scorpio too strategic and considered,” Monahan says. “However, if they look at this aspect as something they can learn more about from the other, it can be a healthy experience.”

This is a “ride or die” duo, says Valerie Mesa, an astrologer and soul coach. “They’re both artistic, both spiritual, [and] there’s a psychic link between the two of them,” she tells Bustle.

But as friends, this duo won’t ever be able to walk all over each other, which earns them mutual respect. “Pisces will keep Scorpio on their toes, and there is a push-pull dynamic but it’s friendly and magnetic. I think Pisces also has the ability to make the hardness in a Scorpio melt away,” says Mesa.

Are Scorpio & Pisces a Good Match?

Overall, Scorpio and Pisces are considered to be a highly compatible zodiac match. They work well together in bed, they both understand each other emotionally, and they both long to have a relationship that lasts. This is one zodiac couple that has what it takes to make their relationship work in the long haul.

More like this
The 3 Zodiac Signs Most Likely To Get Married Later In Life
By Kristine Fellizar
4 Zodiac Signs That Will Take Forever To Admit They Like You
By Kristine Fellizar
TikTok's "Triangle Method" Technique Is The Key To Better Flirting
By Carolyn Steber
18 Hinge Prompt Answers To Try If You’re Looking For Something Casual
By Lexi Inks
Get Even More From Bustle — Sign Up For The Newsletter
From hair trends to relationship advice, our daily newsletter has everything you need to sound like a person who’s on TikTok, even if you aren’t.

This article was originally published on November 26, 2021