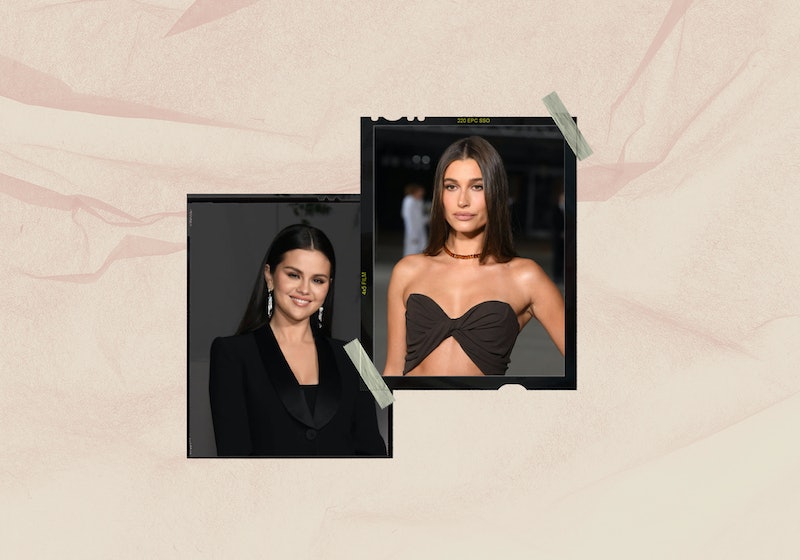 Ever since Hailey and Justin Bieber began dating, there’s been drama between Hailey and Selena Gomez, Bieber’s ex — for their fans, at least. As those who keep up with celebrity gossip know, Gomez and Justin had an on-and-off relationship from 2011 to 2018. Within a few months of their final split, Hailey and Justin Bieber reportedly began their relationship and were married in September 2018 after a whirlwind engagement. The timeline has caused a lot of speculation around whether there was any overlap between the two relationships — despite there not being any real evidence to the theory — and this is what fueled feuds amongst some fans.

Then, in a pivotal moment at the Academy Museum Gala on Oct. 15, these rumors were cordially laid to rest when Gomez and Hailey Bieber posed for several photos together — including one that depicts them sweetly embracing one another with full smiles. While neither star commented on the photos, the friendly snapshots certainly made a crystal-clear statement against all the speculation: There’s apparently no bad blood between these babes.

Whether these chummy photographs depict a genuine moment of connection or are merely some Libra season optics to clear the air of drama, it’s interesting to consider what astrology can reveal about the pair’s compatibility as potential friends, foes, or frenemies. After examining their birth charts, I can say that the astrological compatibility between Bieber and Gomez shows that they may play meaningful roles in each other’s lives — even if their relationship takes place from a distance.

Bieber was born on Nov. 22, 1996, making her a Sagittarius sun, Aries moon, and Sagittarius rising. Gomez’s birth date is July 22, 1992, so she’s a Cancer sun, Aries moon, and Leo rising. Spontaneous Sagittarians like Bieber aren’t always an easy match for sensitive Cancers like Gomez, but both women share a moon in Aries — making them headstrong, feisty, and bold when it comes to emotional expression. They may jump head-first into their feelings and be prone to quick tempers, but Aries moons aren’t ones to hold a grudge — they’re quick to forgive, so even if there’s been some natural tension between the two stars, it’s not likely that it’d last for long.

Additionally, Bieber and Gomez share some notable elemental alignments between other personal planets and placements. Their ascendents (or rising signs) are in fire signs Sagittarius and Leo, respectively — giving both women an aura of confidence and a fun-loving sparkle to their personalities. They also have the mental planet Mercury in the same signs, placing them in their very-visible first house of self and highlighting their outgoing, sociable, and communication-forward nature.

While Gomez’s compassionate Cancer sun is much more emotional and introspective than Bieber’s free-spirited Sagittarius sun, their solar chemistry has more sparks than meets the eye. The pair’s sun signs actually form a near-perfect trine aspect — one of the luckiest, most easily-flowing connections two planets can make. Trines occur when two celestial bodies are 30º apart in the zodiac wheel, so they generally involve planets in signs that share an element. But in the case of Bieber and Gomez — whose sun signs are ruled by fire and water, respectively — their suns form what’s known as an out-of-sign trine. That’s because Gomez was born with Cancer at 29º and Bieber’s is at 0º Sagittarius. With such a gorgeous solar aspect, these two have the potential for a strong soul connection, and their taste in men probably isn’t the only thing they have in common.

While there is plenty of compatibility between Bieber and Gomez’s charts — including their sweet solar trine — there are some points of cosmic contention when it comes to their sun sign placements. Bieber’s sun (the planet of identity) is facing off with feisty Mars (the planet of war and aggression) in Gomez’s chart. This aspect can aggravate a sense of competitiveness between them, perhaps making Bieber want to outshine Gomez, which in turn could make Gomez feel extra defensive. This energy may have very well exacerbated the public’s tendency to pit the two women against each other (although let’s be real, they’d probably have done that anyway).

Additionally, Gomez’s sun is directly opposing the unpredictable planet Uranus in Bieber’s chart. This rebellious vibe may incite a desire for these two to push back against each other — and this kind of interpersonal instability could make it challenging for them to build a close or trusting relationship, even with other compatible planetary alignments. The constant swirl of rumors surrounding their relationship likely only exacerbated the tension of this aspect. But if there is any validity to the reported jabs made by Gomez and Bieber through the years — such as Gomez allegedly shading Bieber in a TikTok video — these sun-Uranus and sun-Mars oppositions could explain why.

Plenty Of Potential For Healing

As Aries moon babies, Bieber and Gomez share a special lunar connection — and that’s only the tip of the iceberg when it comes to their moon sign synastry. Bieber has wounded-healer comet Chiron facing off with Gomez’s moon, which can sometimes be viewed as a triggering aspect in a relationship. From an astrological perspective, it’s clear that a lot of sensitivities may exist between these two women — and there might have even been some emotional wounds inflicted on one another, whether intentionally or not. However, there’s also the potential for these touchy spots to catalyze deep healing and spiritual growth in both parties. Any pain that has been caused by one or the other is likely to lead to meaningful emotional breakthroughs and a deeper sense of wholeness. Healing energy is an important part of this connection.

Additionally, Bieber’s moon is forming a mystical trine aspect with Gomez’s North Node of Fate — a point in the birth chart that relates to one’s lifelong destiny. This sweet connection creates the potential for a deep emotional understanding between the two women and could make them strong collaborators. If they ever were to forge a friendship, it’s likely that they’d share an intuitive understanding of each other’s needs and goals, and would be able to help one another grow into the people they’re meant to be.

While Gomez and Bieber may not currently have much of a relationship outside of their connections to Justin Bieber, their astrological compatibility gives us a glimpse at some of the cosmic energies contributing to their dynamics — as well as the potential for a deeper bond. Their chart synastry certainly denotes some drama, but it also shows plenty of potential for healing, growth, and emotional understanding.