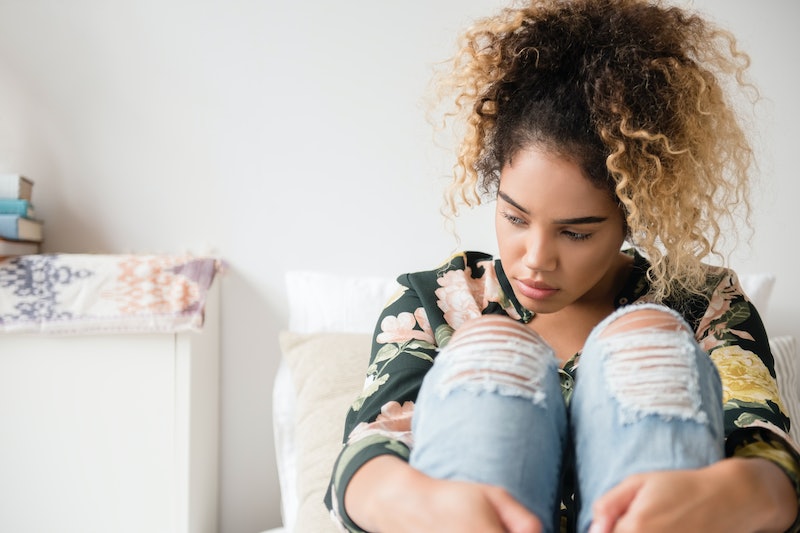 There are many things that can happen to your reproductive organs that in turn can affect your overall health. You may know all about the annoying signs of polycystic ovarian syndrome (PCOS), for example, or the painful symptoms of endometriosis. But other conditions exist that are a little more subtle, which is why it’s helpful to recognize the signs you have a tilted uterus.

Also known as a retroverted or tipped uterus, a "tilted uterus" is when your uterus points slightly backward toward the spine and rectum, instead of forward. "It affects around 20% of the female population and is typically genetic, so there's a good chance that your mother or grandmother also had a retroverted uterus," Nicole Harlow, a women's health expert and founder of The Center for Menstrual + Sexual Health, tells Bustle. "There are certain conditions like endometriosis and uterine fibroids that may also tilt the uterus backwards."

While it sounds scary (titled organs, what?) it's not something you have to worry about, and you likely won't even notice it. As Harlow says, "It just may be uncomfortable in certain situations." Read on below for ways to tell if you have a tilted uterus, including when you might notice it the most. If they sound familiar, ask your gynecologist for a pelvic exam so you can know for sure.

If your uterus points backward, some sex positions may feel too intense due to the angle. This is especially true for the ones where the penis might hit towards the rear of the body instead of the front, such as the reverse cowgirl, Harlow says. For positions like this one, you might think they're too painful, and thus not worth the effort. And that's OK.

You might also notice that deeper penetration is extra painful, too, as well as any position from behind. If that's the case, you can always ask your doctor for ways to make sex more comfortable, if you'd like to try these positions.

2. It's Often Difficult To Put In Tampons

Tampons should be relatively easy to insert once you get the hang of it, as they're designed to slide right inside the vagina. So take it as a sign if you just can't seem to get them in, or if you've always struggled to insert them on the first go.

If your uterus is tilted sharply backwards, "when you insert tampons you may find that the tampon or other insertable doesn't seem to want to sit properly," Harlow says, so the same goes for menstrual cups, too.

While you may have figured out how to use tampons comfortably, even with a retroverted uterus, don't hesitate to ask your doctor for advice if it's still difficult.

3. You Have All Kinds Of Leakage During Your Period

Because tampons and menstrual cups might not sit properly inside, you might notice they don't work as well for you as they do for others. Instead of the blood being properly absorbed, it might leak around the edge of your tampon, and out into your underwear. You might even decide to switch to pads, claiming that tampons just don't work.

If you experience annoying leakage during your period, Harlow says this could be why.

For the same reasons listed above, Harlow says you might not be able to get diaphragms to fit properly. This form of birth control, which is a shallow cup designed to be inserted into the vagina to cover your cervix, might not fall into place properly.

If any of these period/sex-related issues are annoying, talk to your gynecologist about your options. (And, of course, whether or not you might have a tilted uterus.)

5. Your Get Period Cramps In Your Lower Back

While many people feel period cramps in their lower abdomen, if you have a tilted uterus, you may be more likely to experience aches and cramping in your lower back, instead. This can happen for people with a more typical uterus, too, but can be more likely if yours is pointing that way.

As Harlow says, you might also notice more back pain during pregnancy, too.

6. You've Been Having Trouble Getting Pregnant

While a naturally tilted uterus shouldn't affect your ability to get pregnant, one that's titled due to other health conditions might. "If endometriosis or pelvic scar tissue is the cause of a 'tilted' uterus, then you may experience more difficulty getting pregnant," Dr. Janet Choi, M.D., a reproductive endocrinologist with CCRM-New York, tells Bustle.

"A tilted uterus does not affect you later in life," she says, but may be noticeable during child-bearing years. So if you're interested in having kids, this may be helpful to keep in mind. You can ask your doctor about the impact it might have, and what your options are.

If you're particularly susceptible to urinary tract infections, a tilted uterus may be to blame. As Debra Gerson, L.Ac., Dipl. OM, FABORM, a women's health expert, tells Bustle, "[It stems] from the abnormal positioning of the uterus. Sometimes surgery is recommended to correct this condition if symptoms are causing severe distress."

8. You May Have Peed Yourself Once Or Twice

An abnormally positioned uterus may also push on your organs in such a way that it causes other annoying issues, such as incontinence. While there are plenty of other reasons you might be struggling to hold in your pee, or noticing that little dribbles come out in between trips to the bathroom, Gerson says a tilted uterus may be one of them. And since this issue can be embarrassing and uncomfortable, it's certainly worth looking into.

9. It Can Be Difficult To Go To The Bathroom

Do you occasionally struggle with going to the bathroom? If so, it may be because "the tilted uterus can sometimes cause a mechanical compression of the rectum," Dr. Briza Walter, M.D., an OB/GYN, tells Bustle. "Everyone's uterine size is a little different, but if your uterus is a little bulkier and you naturally have hard stools, that can be a bad combination for your bowel movements."

Irregular menstrual cycles may result if your uterus is tipped. Since it's likely been that way your whole life, you might not think anything of your unpredictable period schedule. But it's still something you can bring up at your next doctor's appointment, in order to get more information.

While a tilted uterus might make sex kinda painful, or cause a few issues with peeing and periods, there's a good chance you won't even notice it. As Dr. G. Thomas Ruiz, MD, an OB/GYN, tells Bustle, "The majority of women with a tilted uterus will not have problems." And when that's the case, you can just go about your daily life without a uterine care in the world.

But if it does bother you, go ahead and make an appointment with your doctor. There are ways to help ease the symptoms, should you have any.