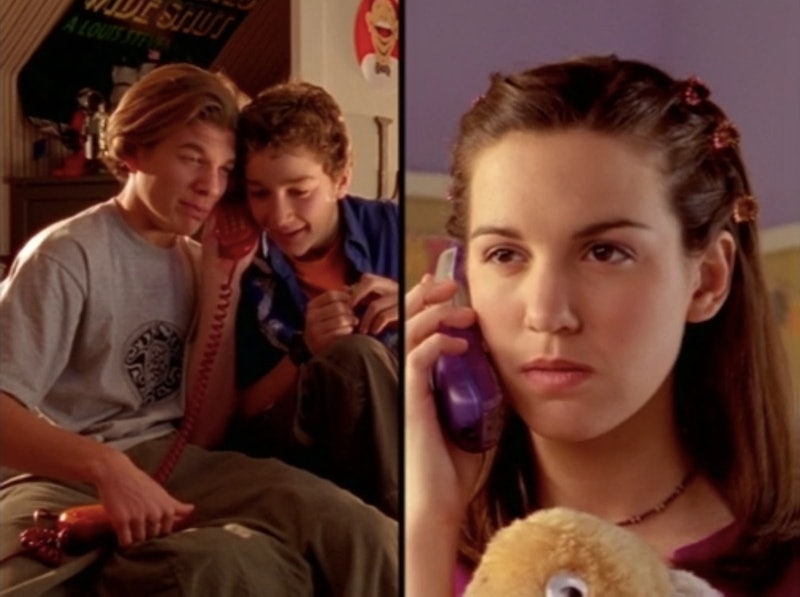 Before Disney Channel hits like Lizzie McGuire, That’s So Raven, and Hannah Montana, there was Even Stevens. Christy Carlson Romano and Shia LaBeouf starred as siblings Ren and Louis Stevens in the early 2000s Disney comedy. For three seasons, the show centered on the siblings’ friction — Ren being the straight-A, overachieving 8th-grade student, while her younger brother Louis loved to pull pranks on her — as well as the ways they always made up after each disagreement. Though the show was a massive hit, Disney had a rule of not exceeding 65 episodes at the time. So, the series ended in typical Disney fashion, with its own Even Stevens Movie in 2003.

The pilot episode, titled “Swap.com,” sees Louis do anything to own a rare trading card, including duping his sister into going on a date with its questionable owner. Ren, too busy trying to be the best at everything, doesn’t question when Louis offers her the volunteer hours she sorely needs via his suggested (read: fake) “adopt-a-friend” program. Ren then spends time at the mall to help the “needy,” aka 7th-grade weirdo Ernie Morton. Here’s everything I noticed watching the pilot episode in 2021.

Let’s get this one out of the way: LaBeouf, who was 14 at the time, was a darling child actor whose breakout portrayal of Louis added depth to the role of annoying little brother, unlike in many other subsequent Disney shows (Lizzie and Raven had mostly annoying younger siblings). In fact, I may have even felt more for him in this episode than Romano’s character. That’s how charming he was.

But as the years have come and gone, he’s been the subject of multiple controversies and allegations. Most recently, his ex-girlfriend FKA twigs alleged she suffered abuse under the Transformers star, even comparing their relationship to being “boiled to death.” In December 2020, he gave a statement to The New York Times, saying, “I have been abusive to myself and everyone around me for years. I have a history of hurting the people closest to me. I’m ashamed of that history and am sorry to those I hurt. There is nothing else I can really say.” He also added, “Many of these allegations are not true.”

Romano, too, has reflected on how LaBeouf has changed. In a video posted on her YouTube channel on Aug. 24 titled “Why I Don't Talk To Shia LaBeouf,” the actor said, “The person that I knew is not the same person now, just based on all of the life experience that he’s had.” She added that she wished she gave him “a little bit more time and energy and love, like a real sister.”

The theme song was accurate.

Though the show’s theme song didn’t contain any lyrics and only showed clay animations of the cast that looked nothing like them, it ended with Ren and Louis sparring with lightsabers, completely summing up the show’s premise: warring siblings. If you’ve never watched the show, this 40-second intro is all you need to set the tone.

Anyone else feel like they regressed back to their teen selves while in lockdown? Especially those who moved back home, however temporarily? Well, the traits that universally irk siblings and the many ways in which siblings fight are so accurately portrayed in the pilot. Ren shutting the door on Louis multiple times could’ve been released this year and would still feel current. Sibling rivalry stands the test of time.

Not only did Ren volunteer for the selfish reason of out-volunteering her nemesis, but the actual work entailed seemed off. Granted, she was conned into a day at the mall with Ernie, “who probably had to walk” to the mall, but the star student never stops to gauge if it was insensitive to shop with him and have him carry her multiple shopping bags and balloons.

Plus, it gave off major date vibes.

Via a video montage, Ren and Ernie engage in borderline date-like activities, like stopping for ice cream cones. Sure, Ren seems grossed out by Ernie most of the time (especially when he licks her dessert), but she still suggests taking cutesy photo booth pictures, including one with Ernie air-kissing Ren.

For all of Disney’s positivity and branding as the HQ of happiness, the station didn’t shy away from portraying high school as a nasty, mortifying place where ridicule was a common occurrence.

The counselor's office had a lot of candles.

Call it adulting or merely self-care by way of scented candles, but there’s a scene where Ren finally hands in her volunteer report to the school counselor, and I immediately zoomed in on the faculty member’s decor. Brushing aside the highly flammable stacks of papers, her office features clusters of lit candles in various votives that look so relaxing. It begs the questions: Is this the counselor’s spa-like respite from all the teenage-induced stress? Isn’t that a fire hazard? Are those Bath & Body Works? And why do I now have the urge to “add to cart”?

Yes, as in Kramer from Seinfeld. A weird choice for a kid.

2000s fashion shouldn’t come back in all its glory.

While early aughts fashion is making a major, nostalgic comeback, the styles are not as chic as we remember. Butterfly clips, jelly accessories, and bright eyeshadow may deserve a spot in our 2021 style repertoire, but the early ’00s era also popularized itchy tattoo chokers, open printed button-downs over T-shirts and cargo shorts, and puka shell necklaces. Some Y2K styles should stay in the past.

More like this
Netflix Reveals First Look At Wednesday In The 'Addams Family' Spinoff Series
By Bustle Editors
A New 'And Just Like That' Table Read Pic Confirms A Key Character's Return
By Jack Irvin and Grace Wehniainen
24 Years Ago, 'Friends' Dropped Its Most Underrated Ross & Rachel Episode
By Grace Wehniainen
Louisa Harland’s New Show Is A Far Cry From Derry Girls
By Frances Stewart
Get Even More From Bustle — Sign Up For The Newsletter