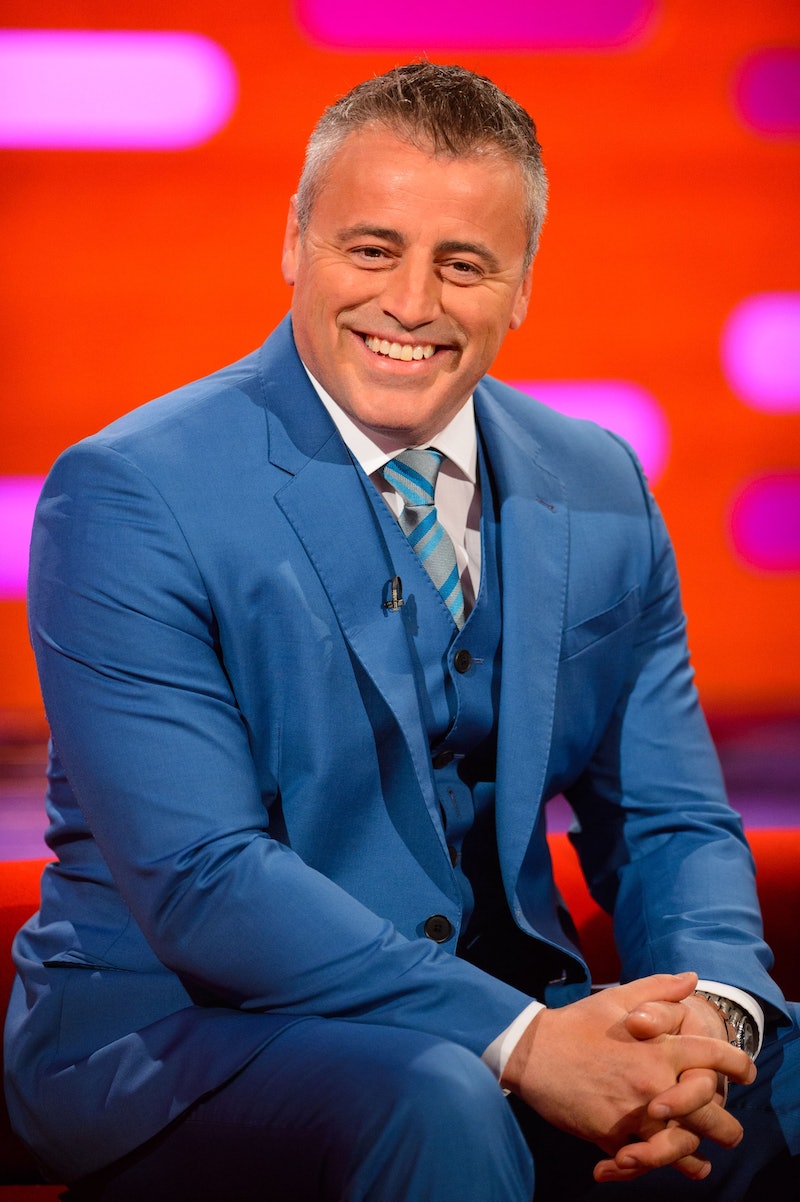 When Monica, Chandler, Phoebe, Rachel, Ross, and Joey finally reunited for the much-awaited HBO Max Friends special on Thursday, May 27, fans fell for the six-member gang all over again. The chemistry between the actors, the jokes, and even the songs fueled the nostalgia. One of the reunion’s most memorable moments was when Matt LeBlanc, who played Joey Tribbiani to clueless perfection, strutted in his character’s most iconic outfit: piles of Chandler’s clothes. (The 2021 special’s underwear situation is unclear, but Joey supposedly went commando in the original Season 3 episode.)

Joey is arguably one of the most beloved characters in the sitcom, and his loyalty was unparalleled. (Remember when he laid off meat for a pregnant Phoebe? A true act of love for a carnivore.) Plus, his “How you doin’?” pick-up line — a greeting intoned to a flirty tee — remains iconic. It’s no surprise that when the show wrapped in 2004, LeBlanc’s career continued to reference his most popular role, whether through his Joey spinoff or Episodes, a comedy series about his post-Friends career.

Barring the Episodes star’s major flops and questionable roles like All the Queen’s Men, Lovesick, and Ed, which got a 0% on Rotten Tomatoes, we compiled five of his most memorable roles through the decades.

Six New Yorkers navigate career, love, and life together for 10 seasons on Friends, the show that catapulted Jennifer Aniston, Courteney Cox, Matthew Perry, Lisa Kudrow, and David Schwimmer, and LeBlanc to stardom. A pop-culture institution, Friends gave us “the Rachel” haircut, the earworm Smelly Cat, the one-true-love “Lobster” concept, and unrealistic Manhattan real estate expectations. On the sitcom, LeBlanc plays the meatball sub-loving womanizer Joey Tribbiani, who is also a really, really good friend. He plays a struggling artist who gets his big break playing Dr. Drake Ramoray in Days of Our Lives. Until he gets the boot, that is.

After the finale in 2004, which ends with an unattached Joey with a dedicated room at Monica and Chandler’s suburban home, LeBlanc reprised his role for a Joey spinoff. In this Friends offshoot, he stars as the titular character who moves to Hollywood to pursue his acting aspirations. Though it only ran for two seasons until 2006, LeBlanc gained Emmy and Golden Globe nominations for playing Joey on both Friends and the spinoff.

LeBlanc plays a fictionalized version of himself from 2010 to 2017 in an Emmy-nominated sitcom about his post-Friends acting career. Episodes follows a husband-and-wife writing team attempting to remake their British hit show in America. With no other willing and available actor, the writers are forced to cast LeBlanc, who is completely unfit for the role. LeBlanc’s chaotic tendencies and relationships eventually disrupt the show — and their marriage. The role landed LeBlanc his first Golden Globe, among other nominations.

In the 2000 film Charlie’s Angels, Drew Barrymore, Cameron Diaz, and Lucy Liu team up as the iconic crime-fighting trio who use their skills and wiles to catch bad guys under the direction of Charlie, a disembodied voice on the speaker. LeBlanc joins the cast as actor Jason Gibbons, boyfriend to Liu’s whipsmart Alex Munday and live-action movie star who doesn’t catch on that his girlfriend fights crime IRL. (We’re sensing a pattern here.)

He reprised his role in 2003 for the film’s sequel, Charlie’s Angels: Full Throttle. This time, Jason is more stable in his career and love life, despite the secrets Alex keeps from him. The final battle with the new villain (Demi Moore) even takes place on his movie’s premiere night.

Man With a Plan

Man with a Plan is LeBlanc’s most recent project that he both stars in and executive produces. He plays lead Adam Burns, a contractor who needs to learn to juggle daddy duties and his business after his wife Andi (Liza Snyder) decides to return to work. Over the course of four seasons, Adam navigates the complicated relationships that come with working with family and steps up as a father to his three kids.

LeBlanc reunites with his Friends co-star Kudrow on her improvisational web-turned-TV series Web Therapy, where she plays therapist Fiona Wallice, doling out questionable advice via online teleconsulting. (A platform we’ve now become accustomed to since the pandemic.) LeBlanc guest stars in a two-episode arc as Nick Jericho, a man whose gambling addiction is causing problems in his marriages (he’s on his fifth). Their Friends co-stars Schwimmer and Cox have also appeared on the show.

More like this
'That '90s Show' Star Callie Haverda Got Advice From Mila Kunis & Ashton Kutcher
By Brad Witter
The 8 Best Aidan Shaw Moments On 'Sex And The City'
By Grace Wehniainen
The 'Scream 6' Trailer Shows Off Hayden Panettiere's Return & Ghostface In NYC
By Jack Irvin and Jake Viswanath
Man Meets Politics: ‘Boy Meets World’ Star Ben Savage Is Running For Congress
By Jake Viswanath
Get Even More From Bustle — Sign Up For The Newsletter
From hair trends to relationship advice, our daily newsletter has everything you need to sound like a person who’s on TikTok, even if you aren’t.