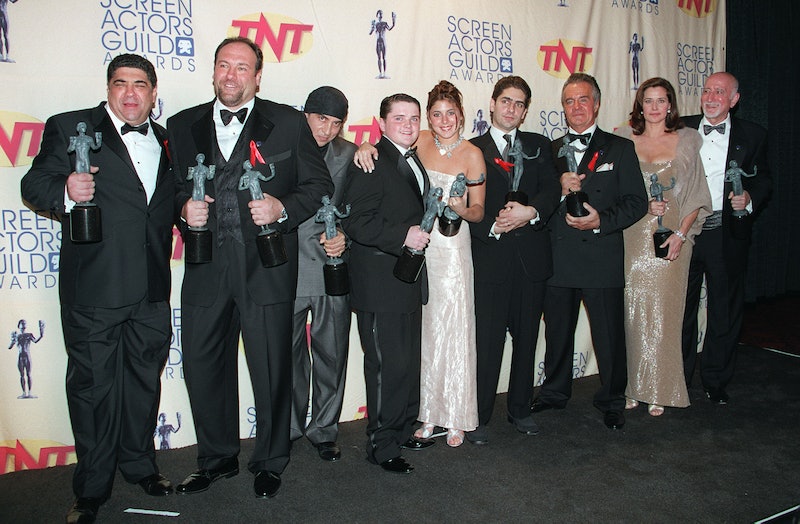 There’s a reason why The Sopranos is widely considered to be one of the best shows in all of television history. Created by David Chase, the 1999 American crime drama about the complicated lives of a New Jersey crime family helmed by Tony Soprano (James Gandolfini) aired for six seasons to critical acclaim. It also built and still maintains a devoted fan base — despite ending on an extremely polarizing cliffhanger that continues to make people grab their television screen and shout, “That’s it!?”

In fact, The Sopranos is so highly revered to this day that in 2019, 12 years after the show’s finale, it was announced that a prequel was in the works. Written and produced by Chase, The Many Saints of Newark released in theaters and began streaming on HBO Max on Oct. 1, telling the story of a young Tony Soprano, played by the late Gandolfini’s son, Michael. Leslie Odom, Jr., Alessandro Nivola, and Vera Farmiga also star.

If you’ve ever been curious about where the show’s original cast is now, then you’re in luck. Since the finale in 2007, The Sopranos’ powerful cast, which includes Edie Falco, Lorraine Bracco, and Michael Imperioli, have all gone on to make waves in a multitude of other successful television shows and movies. Ahead are a few of the cast’s standout performances since the last time fans saw them. Be sure to bookmark this list, too, as we’ll continue to update it with more exciting content from these fantastic actors as it becomes available.

Even before his portrayal of the notorious Italian American mob boss Tony Soprano, Gandolfini had already made a prominent name for himself as an actor. Gandolfini, who passed in 2013, cut his teeth in roles like Virgil in the Quentin Tarantino-written dark comedy True Romance, 1994’s Terminal Velocity, and alongside Alec Baldwin and Demi Moore in 1996’s The Juror. After the success of The Sopranos, Gandolfini went on to voice the lovable wild thing Carol in Spike Jonze’s Where The Wild Things Are, showed off his romantic comedy skills in 2013’s Enough Said, and gave his final performance opposite Tom Hardy in the 2014 film The Drop.

Following her performance as Carmela Soprano, Falco stepped into the lead role of Jackie Peyton in the critically acclaimed medical drama Nurse Jackie, which she helmed for seven seasons, from 2009 to 2015. In the years after, she stunned audiences as Leslie Abramson, the attorney who defended the Menendez brothers, in the limited series Law & Order True Crime: The Menendez Murders. Now, Falco is set to portray General Ardmore in the upcoming second and third installments of James Cameron’s iconic Avatar films. Plus, she traded in the military fatigues for a pressed suit as former Secretary of State Hillary Clinton in the third season of Ryan Murphy’s American Crime Story that centers on the 1999 impeachment trial of Bill Clinton.

For seven years, Bracco was a key member of The Sopranos cast as Tony Soprano’s psychiatrist, Dr. Jennifer Melfi. In the years after the show, Bracco has taken on a wide variety of roles that show off her acting prowess. From 2010 to 2016, she starred as the fiery and protective mother of Jane and Frankie Rizzoli on the TNT crime series Rizzoli & Isles. A year later, she could be seen as Mayor Margaret Dutton in the crime procedural show Blue Bloods, and currently she acts as Tim’s mom on the British comedy series Jerk. In addition to onscreen acting, Bracco is set to voice Sofia the Seagull in Disney’s upcoming live-action adaptation of Pinocchio alongside Tom Hanks, Luke Evans, and Joseph Gordon-Levitt.

Fans of The Sopranos will instantly recognize Imperioli as Tony’s apprentice and “nephew” Christopher Moltisanti. The now 55-year-old actor’s career is still going strong to this day. In 2020, Imperioli played Muhammad Ali’s trainer Angelo Dundee opposite Eli Goree in the Regina King-directed film One Night in Miami... He is also known for his role as NYPD Detective Rick Sellitto in the 2020 crime drama Lincoln Rhyme: Hunt for the Bone Collector and as investor Eddie in the 2018 ABC sitcom Alex, Inc. starring Zach Braff.

While he might be known for playing mobster Silvio Dante on The Sopranos, off screen Van Zandt is largely known for working alongside another very different Boss: Bruce Springsteen. In addition to being a talented actor, Van Zandt deftly balances a career as an active member of Springsteen’s E Street Band, where he plays guitar and mandolin. Since the end of the show, the 70-year-old actor has gone on to star in the leading role of Frank “The Fixer” Tagliano in the TV series Lilyhammer and play Jerry Vale in Martin Scorsese’s Oscar-winning 2019 film The Irishman.

Who can forget Bobby Baccalieri? The kindhearted and loyal “Bobby Bacala,” who was played by Schirripa, was one of Tony’s closest companions and brother-in-law in The Sopranos. Schirripa’s resume has only grown since the filming of the show, with the addition of roles like Ben’s father, Leo Boykewich, on the hit teen drama series The Secret Life of the American Teenager, which ran from 2008 to 2013. In 2015, Schirripa took on the role of retired NYPD Detective Anthony Abetemarco on the show Blue Bloods and remains an active member of the show’s cast in 2021.

Just like her second husband, Bobby, the actor behind the fierce and competitive Janice Soprano Baccalieri has also taken on a wide range of acting roles since the end of the show. Turturro made multiple appearances on programs that included a few familiar Sopranos family faces, like Blue Bloods and Nurse Jackie, as well as performances on hit shows like Brooklyn Nine-Nine. In 2017, Tuturro landed a recurring role on the crime thriller series The Blacklist as Heddie Hawkins before the show officially ended in 2021.