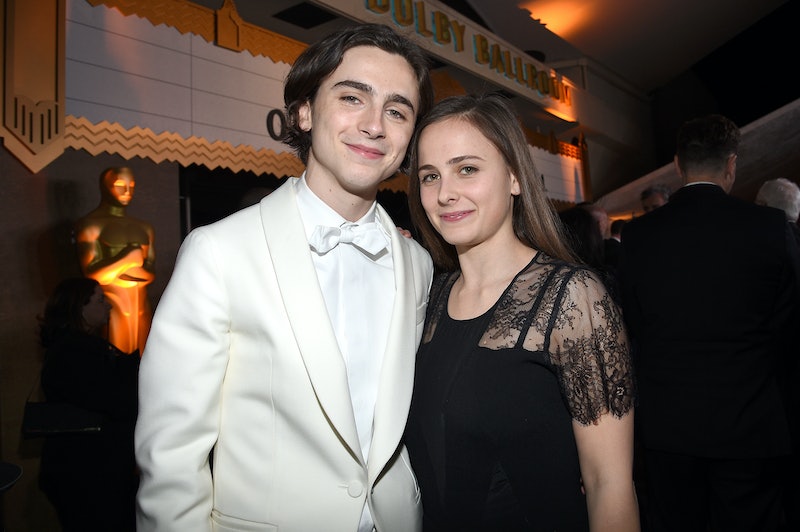 Timothée Chalamet is the internet’s dreamboat. Between hanging out with Larry David, hosting Saturday Night Live, and dominating red carpets one monochromatic look at a time, Timmy can do no wrong. Luckily, someone else shares his genes and is a burgeoning star in her own right: Timothée’s older sister, Pauline Chalamet.

In the upcoming HBO Max comedy series The Sex Lives of College Girls, out Nov. 15, it’s Pauline’s turn to wow audiences with her funny antics as one of the leads in the Mindy Kaling-produced show. One of four roommates at the prestigious Essex College, Pauline plays the school-loving, library-going Kimberly, who believes sex is “an expression of commitment.” Amrit Kaur (Star Trek: Short Treks), Renée Rapp (Broadway’s Mean Girls), and Alyah Chanelle Scott (The Book of Mormon) complete the Gen Z foursome. Bound to captivate hearts like her brother so effortlessly has, read on to know more about Pauline Chalament, including her past roles, family, and silly social media persona.

Pauline’s first foray into acting came early in her life; she was only 7 when she appeared in an episode of daytime soap One Life to Live in 1999. After a 10-year acting hiatus to focus on school, she returned to the small screen in 2009 and guested on the series Royal Pains. It then took Pauline another seven years before returning to acting. She’s since appeared in other shows, including Canadian series La Ville and, more recently, Parisian drama series Woke: XAOC.

She also took a stab at directing. In 2016, she starred in and directed the short film Between Fear and Laughter, marking her directorial debut. She’s since taken part in many more short films, directing, writing, or acting in them.

Pauline’s feature debut came in 2019 when she starred alongside Pete Davidson in the Judd Apatow-directed The King of Staten Island. In it, she plays Joanne, BFF to Davidson’s onscreen sister portrayed by Maude Apatow. Her new HBO show will mark her first lead role.

The 29-year-old actor graduated from the famed arts school Fiorello H. LaGuardia High School of Music & Art and Performing Arts in New York. (Both her brother and mom Nicole Flender are also alumni.) When she was younger, she aspired to be a dancer and had stints as a ballerina with the New York City Ballet and the American Ballet Theater.

On social media, the bare-faced actor seems unfettered and unfiltered. She sings while strumming a ukulele, dances at home, and shares her exhaustive reading lists — among them, Victor Hugo’s Les Misérables, Robin DiAngelo’s White Fragility, and Milan Kundera’s The Unbearable Lightness of Being, in French, naturally.

When she’s not sharing snapshots highlighting her quirky personality, Pauline posts about the causes she supports, which include championing sustainable companies, speaking out against patriarchy, and the importance of voting, among others.

Everyone already knows Pauline’s super famous brother, a bona fide star who got his Hollywood start in 2012 in Homeland. Though the Beautiful Boy beautiful boy has since gone on to star in Interstellar, Lady Bird, and Greta Gerwig’s Little Women, his most notable role to date is as Elio Perlman in 2017’s Call Me By Your Name, which earned him an Academy Award nomination. Timothée’s latest buzzy project will see him transform into the kooky chocolate aficionado Willy Wonka in the upcoming film Wonka with a 2023 release date.

Meanwhile, Pauline’s father, Marc, built his career as a journalist. His LinkedIn profile lists him as a NY Correspondent for Le Parisien, a freelancer for various publications, and an editor for the United Nations — a position he’s had since 2016. Pauline had talked about her dad’s career adoringly, even telling L’Officiel that she wanted to follow in her non-showbiz father’s footsteps at one point. “I wanted to work for the United Nations like my father, a journalist,” she said. “Like my father, I wanted to be an environmental engineer.”

The Chalamet family seems tightknit and mutually supportive. They’ve appeared at events together, including multiple awards shows where Timothée brought his mom as his date.

They also celebrate each other’s accomplishments. After the announcement that Pauline would star in Kaling’s show, Timothée shared a screenshot of the news article on his Instagram story with a string of clapping emojis, per People.

When Timothée’s not being supportive, however, he’s publicly trolling Pauline, as only a younger brother could. “bday gurl... the big 5-0 so soon !!” he wrote on Instagram on her 27th birthday in 2019. Here’s to hoping the collab extends from Instagram to the big screen sometime soon.

More like this
Who Is "Daddy" Pedro Pascal Dating? People Are Thirsting Over The 'Last Of Us' Star
By Alyssa Lapid
Who Is Murray Bartlett Dating? 'The Last Of Us' Star Is Extremely Private
By Alyssa Lapid
'GoT' Star Emilia Clarke Says She "Just Can't" Watch 'House Of The Dragon'
By Brad Witter
Here’s What Happens To Bill & Frank In 'The Last Of Us' Video Game
By Brad Witter
Get Even More From Bustle — Sign Up For The Newsletter
From hair trends to relationship advice, our daily newsletter has everything you need to sound like a person who’s on TikTok, even if you aren’t.