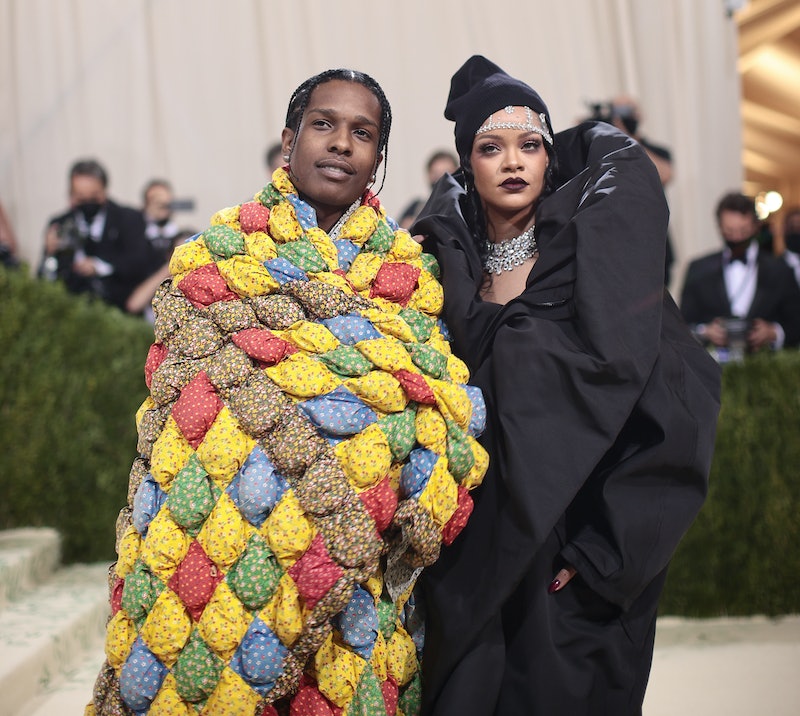 When it comes to swoon-worthy A-list power couples, Rihanna and A$AP Rocky are at the top the charts. As fashion icons and music industry royalty in their own rights, these two stars have been collectively turning heads ever since their relationship was confirmed in 2021. And it appears that they’re taking their relationship to an even deeper level of commitment: On Jan. 31, Rihanna announced her pregnancy, officially debuting her bejeweled baby bump in a photoshoot with Rocky by her side. The singers welcomed their child into the world on May 13, TMZ reported, making Rihanna and A$AP Rocky’s baby’s zodiac sign Taurus.

We’re fully obsessed with Rihanna and Rocky, and now that they’re bringing a new baby into the world, we’re even more invested in their romance — which means it’s time to rustle up their natal charts and get the full scoop on their synastry (aka, the astrological compatibility between their planetary placements). While we have the full deets Rihanna’s astrological chart, Rocky’s exact birth time is unconfirmed, which means we can’t be sure of his rising sign or identify which houses of the birth chart his natal planets fall into. However, using his birth date and location, we still have a clear picture of his major planetary placements — and thus can thoroughly examine the cosmic connections that define Rihanna and Rocky’s bond. Here’s what the planets have to say about Rihanna and Rocky’s astrological compatibility and their future as a family.

Rihanna (born Feb. 20, 1988) is a dreamy and sensitive Pisces, while Rocky (born Oct. 3, 1988) is a social and aesthetic-minded Libra. While these two signs aren’t particularly compatible on their own, they’re both deeply romantic zodiac characters who love to be in love and embrace their creativity — so there’s plenty of common ground. But the real cosmic chemistry kicks in when we look beyond their sun signs: Rihanna and Rocky both have communication planet Mercury in air signs, and they each have romantic planet Venus and sexual planet Mars in fire signs. The easy-flowing elemental compatibility between their personal planets gives the pair a strong intellectual and social connection, as well as a deep sense of alignment when it comes to the way they chase their goals, show their affection to one another, and express their desires.

Rocky has gushed about his adoration for Rihanna in interviews, calling her “the love of my life” and “the One.” And based on their birth charts, it appears he may hold an equally special place in Rihanna’s heart. In astrology, the descendent sign represents what we’re looking for in an ideal partner and what qualities help us to better balance out our own — and Rihanna has this point in Libra, which happens to be Rocky’s sun sign. This indicates that Rocky’s core Libran identity is in perfect alignment with what Rihanna is attracted to. Additionally, Rocky’s Venus (aka, the planet of love) is in Leo, which falls into Rihanna’s fifth house of pleasure, sex, and romance — meaning his style of showing affection is also in line with what Rihanna seeks in dating, sparking an instant romantic attraction. Additionally, having love planet Venus in Leo tells us that Rocky is likely attracted to glitz, glamour, regality, and star power — making a center-stage pop star, fashion mogul, and style icon like Rihanna an ideal cosmic match.

Slow-Burning Passion Is Written In The Stars

Let’s talk about astrology’s lover planets: Romantic planet Venus and sex planet Mars. Rihanna’s Mars in adventurous Sagittarius forms a perfect trine aspect with Rocky’s flashy Venus in Leo. This steamy and auspicious Venus/Mars connection is super hot — especially because it takes place in the realm of the passion-fueled fire signs. The couple’s romantic and sexual energy work together beautifully, so they’ll likely have an easy time maintaining the excitement of the chase, even long after the high of the honeymoon phase has worn off.

Speaking of lucky trines between the love planets, this power couple’s astrology has no shortage of romantic chemistry or lasting power. Rocky’s Venus sign also forms a harmonious trine to Jupiter, Saturn, and Uranus in Rihanna’s chart. Overall, these connections show that this couple is able to support each other’s growth and weather unpredictable changes together, and it also gives the relationship lasting power and a foundation of trust.

But of course, there could be some cosmic conflicts, too. Rihanna’s moon and Venus are aligned in the feisty sign of Aries, sitting almost exactly opposite to Rocky’s diplomatic sun in Libra. This shows that the couple may regularly run into emotional misunderstandings that require compromise on both ends. On the bright side, planetary oppositions can also fuel attraction, so their occasional friction may ultimately lead to a deeper understanding of one another and bring them closer together.

Astrologically speaking, pregnancy was in the cards for Rihanna in 2022, thanks to Jupiter’s tour through Pisces. As we kicked off 2022, abundant planet Jupiter was crossing directly over Rihanna’s sun — which also happens to be the ruler of Rihanna’s fifth house, which corresponds with children. This special transit only occurs about once every 12 years, and it’s known to bring bountiful blessings, the birth of new opportunities, and yes — babies! Jupiter will spend most of 2022 in Pisces, lighting up Rihanna’s goals and activating the creative energy of her fifth house, making it a very auspicious time to welcome a child.

Additionally, both Rihanna and Rocky were due for some major soul-level growth and spiritual expansion in 2022, thanks to the presence of Jupiter in Pisces. That’s because both stars have their North Nodes of Destiny located in Pisces — and with expansive Jupiter connecting with each of these life-altering points in 2022, it’s virtually guaranteed that this is a year that will open new doors and help put them in alignment with their higher purpose.

What’s especially significant is that they’re both experiencing this transit this year. Sharing a North Node sign indicates that the couple is on a similar spiritual mission throughout their lives and can identify with one another on a deep karmic level. As they step into the powerful role of parents and bring a new life into the world, the couple will feel cosmically aligned in their transformation and shared destiny.

This article was originally published on Feb. 1, 2022